Dark Devotional: A Call to Change 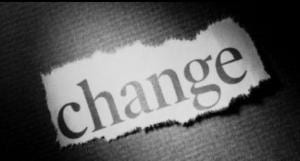 We do one thing or another; we stay the same or we

Mary Oliver, “To Begin with, the Sweet Grass”

Change is an interesting phenomenon in the Christian tradition. On the one hand, the strong Aristotelian and Thomistic underpinnings of Christian theology assert that God is unchanging. He is the unmoved mover, the one fixed point in all reality.

And yet, the Incarnation, the ultimate paradox, turns this idea on its head. The Word became Flesh. The immaterial became corporeal. The eternal entered time. The unchanging changed.

Even to say as much feels like approaching the heretical, but we really can’t deny it. To grow from an infant into a 30-year-old man requires change.

The unchanging God changed. Frankly, it’s an unsettling thought. Most of us want God to be a fixed point. Theologically and philosophically, immutability is one of the things that defines God. God is God precisely because he does not change. Moreover, on an emotional level, it is a comfort to lean on the idea that, in a turbulent world, there is something or someone who does not change.

I can’t resolve the tension between the idea of an unchanging God and an Incarnational God who did, and perhaps does, change. The Incarnation is a paradox, and that’s about the only explanation I feel qualified to offer.

But change appears elsewhere in the Christian tradition. It appears in the idea of conversion. Whether God does or doesn’t change, we are supposed to change. We are supposed to change. And what’s more, our changing, our conversion, is not supposed to be a once-and-done. We don’t convert to Christianity, become baptized, go to church, and call ourselves good. We are called to continual conversion, which sounds very spiritual and rarefied. But really, what this means is that we are called to change and to keep changing.

And what change does God ask of us? The Book of Isaiah lays it out as follows:

Thus says the LORD:
Share your bread with the hungry,
shelter the oppressed and the homeless;
clothe the naked when you see them,
and do not turn your back on your own.
Then your light shall break forth like the dawn,
and your wound shall quickly be healed;
your vindication shall go before you,
and the glory of the LORD shall be your rear guard.
Then you shall call, and the LORD will answer,
you shall cry for help, and he will say: Here I am!
If you remove from your midst
oppression, false accusation and malicious speech;
if you bestow your bread on the hungry

and satisfy the afflicted;
then light shall rise for you in the darkness,
and the gloom shall become for you like midday.

Again and again throughout scripture, God reminds us to feed the hungry, clothe the naked, and shelter the homeless. He tells us to care for the foreigner, for the widow and the orphan. In the Gospels, Jesus’s work is not only preaching. The Incarnate God is not just a theologian. He heals people of their illnesses. He feeds people. He brings the outcasts into the community.

Why is this the example Jesus sets? Why does God constantly point us towards concrete actions such as feeding the hungry?

It’s because we need to be reminded.

Those of us within the Christian tradition need to be reminded of what our work really is. It is such a temptation to believe that it is sufficient for us to be part of the group. We fall into the trap of believing that we are good because we belong to the “right” group. We put our energy into proving that we belong instead of into bringing about the change in the world and in ourselves that God asks of us – feeding the hungry, sheltering the homeless, healing the sick, removing oppression.

This is, of course, evident in 21st century America, where the illusory unity between the GOP and Christianity exerts such a powerful influence. That most people believe that Christianity is represented by a political party that wants to defund food stamps and healthcare and education is a victory of marketing. It is no victory for the Gospel.

And so my prayer for 2021 is a prayer for change. It’s a prayer that we will be bold enough to change, that we will not fear our conversion, and that we will have the courage to turn away from movements and leaders that instruct us to purchase our belonging by helping people less.

Maren Grossman is a contributor and former assistant editor at Sick Pilgrim. She received an M.A. in philosophy from Catholic University in 2007, but left grad school to homeschool her kids. Her work has appeared in the online journal Living Education, the journal Convivium, and the Ethel Zine.

February 8, 2021
Things Keeping Us Going for February 8
Next Post

February 15, 2021 TKUG: Rolling Up on Lent Edition
Recent Comments
0 | Leave a Comment
"https://www.youtube.com/wat..."
Theodore Seeber How Blogs Hurt (and Help) the ..."
"I agree with Jacobs. Our writer could have bowed to the altar in the Episcopalian ..."
edlondinium Dark Devotional: The Case of the ..."
"Oh dear. Shades of Pascal's wager. What I choose to do with my life is ..."
Linguagroover Dark Devotional: On the Outside with ..."
"A serious study of Catholicism will show that Jesus' Gospel message was and is a ..."
Jo Ann Elder-Nativity Dark Devotional: On the Outside with ..."
Browse Our Archives
get the latest from
Sick Pilgrim
Sign up for our newsletter
POPULAR AT PATHEOS Catholic
1

A Dandelion and a Mothers' Day...
Steel Magnificat
Related posts from Sick Pilgrim