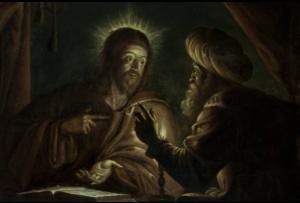 Whoever lives the truth comes to the light, so that his works may be clearly seen as done in God (John 3:21).

One of the more annoying aspects to the scriptural readings proclaimed at Mass is that the readings are rarely “complete.” With the exception of the passion narratives during Holy Week, most of the Gospel readings throughout the liturgical year have been pared down, essential details that are important to understanding the stories whittled away, perhaps in the interest of “saving time” during Mass.

Take today’s optional Gospel selection, John 3:14–21, for example. Last week’s optional Gospel selection was taken from John 2 and told the story of Jesus driving the money changers out of the Temple. In this week’s reading, we see Jesus lecturing Nicodemus, a Pharisee and teacher of Israel (John 3:1, 10) on those who prefer darkness to light because they don’t want the evil they do to be exposed to the light (John 3:19–20).

It’s no wonder then that homilists, in discussing today’s Gospel, prefer to zero in on John 3:16 and spend their seven to ten minutes offering comforting platitudes about God’s love, belief in Jesus, and the promise of heaven.

But if we move back to the start of chapter 3, John opens this story of Jesus’ encounter with Nicodemus with an important detail:

Now there was a man of the Pharisees, named Nicodemus, a ruler of the Jews. This man came to Jesus by night and said to him, “Rabbi, we know that you are a teacher come from God; for no one can do these signs that you do, unless God is with him” (John 3:1–2).

This man came to Jesus by night.

When noted at all, this detail is often portrayed negatively. Nicodemus was afraid of his fellow Pharisees, we’re told. Or perhaps the night is supposed to be a symbol for Nicodemus’s spiritual condition. But John never shows Nicodemus as having been afraid to approach Jesus or worried about his fellow Pharisees’ opinion of him. He simply says that Nicodemus first found Jesus in the dark. And, as we’ll see, John portrays Nicodemus as one of the heroes of his Gospel, not as a villain or as an ignorant fool.

This detail that Jesus and Nicodemus met at night frames the rest of the story, from Jesus’ talk of light and darkness to his prediction of the kind of death he would suffer to his reassurance to Nicodemus that he had come to save the world, not to condemn it.

Perhaps, then, it is worth thinking about how we find things in the dark.

Have you ever awakened in the middle of the night and needed to get up and do something? If you’re like me, you don’t want to turn on the light. You prefer to use your knowledge of the layout of your house to get what you need in the dark. So, you remember where all the obstacles are, carefully skirt them, find the doors, move quietly so as not to wake anyone else. You can do what you need to do, whether it’s a trip to the bathroom or to the kitchen for a midnight snack, without much trouble.

Why? You’re comfortable in the dark. You know there aren’t any monsters under the bed or murderers in the basement. At most, you risk stubbing your toe on your nightstand. Best of all, you’re more likely to stay half-asleep and return to sleep more quickly once you’re back under the covers.

That may be Jesus’ point in warning Nicodemus about deeds done in darkness. It’s not that people become more evil in the dark; it’s that they risk becoming more comfortable in the dark and unwilling to step into the light when they find it. Light wakes us up, it hurts our eyes, we have to take time to adjust to it.

But once we do, once we are in the light, we see everything more clearly.

Nicodemus doesn’t fade back into the darkness after his encounter with Jesus. He remains a quiet presence throughout the rest of John’s Gospel.

When the chief priests and the Pharisees were accusing their Temple guard of dereliction of duty for being unwilling to arrest Jesus (John 7:43–49), Nicodemus spoke up in Jesus’ defense: “Does our law judge a man without first giving him a hearing and learning what he does?” (v. 51). Essentially, Nicodemus was asking his fellow rabbis and the priests to do what he’d done, to approach Jesus and ask him questions so that they might better understand Jesus before attempting to arrest him.

The religious leaders sneer at Nicodemus’s suggestion, saying, “Are you from Galilee too? Search and you will see that no prophet is to rise from Galilee” (v. 52), but note what happens next. They all went home (v. 53). Jesus was left in peace, for a while longer, to continue his ministry. It’s not that much of a stretch to speculate that Nicodemus saved Jesus’ life that day.

Eventually, though, Jesus’ hour would come, and he would have to suffer and die in the manner he predicted to Nicodemus by being “lifted up” on the cross (John 3:14). And on that day, when darkness covered the land at midday (Matt. 27:45, Mark 15:33), Nicodemus approached Jesus again. This time he wasn’t there to ask questions but to take action. He brought a hundred pounds worth of myrrh and aloe with which to anoint Jesus’ body before burial (John 19:39).

A hundred pounds worth of valuable myrrh and aloe? Where on earth did Nicodemus obtain it all and have it on hand for Jesus’ burial? Is it possible that after he met with Jesus he started preparing for Jesus’ death—deciding, perhaps, that if the day came that Nicodemus was no longer in a position to save Jesus’ life that he would at least make sure that Jesus would be laid to rest with honor?

Nicodemus’s story reminds us that Jesus will meet us wherever we are, even in darkness. He is the way, the truth, and the life (John 14:6) and sometimes we can only find the way under cover of darkness. But Jesus is also the light of the world (John 8:12). If we choose to stay with him, to walk with him the rest of the way, we’ll need to become comfortable with transitioning from darkness to the light. 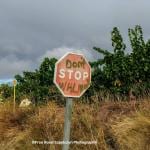 March 15, 2021 Things Keeping Us Going for March 15th
Recent Comments
0 | Leave a Comment
"https://www.youtube.com/wat..."
Theodore Seeber How Blogs Hurt (and Help) the ..."
"I agree with Jacobs. Our writer could have bowed to the altar in the Episcopalian ..."
edlondinium Dark Devotional: The Case of the ..."
"Oh dear. Shades of Pascal's wager. What I choose to do with my life is ..."
Linguagroover Dark Devotional: On the Outside with ..."
"A serious study of Catholicism will show that Jesus' Gospel message was and is a ..."
Jo Ann Elder-Nativity Dark Devotional: On the Outside with ..."
Browse Our Archives
get the latest from
Sick Pilgrim
Sign up for our newsletter
POPULAR AT PATHEOS Catholic
1