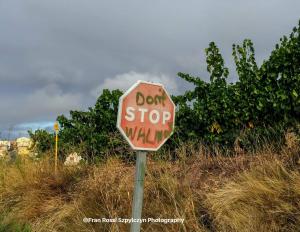 This is the fourth week of our Lenten Series: Sick Pilgrim’s Progress. You can read week 1 here, week 2 here, and week 3 here.

In 1992 I heard about the Camino de Santiago, in my case the Camino Francés

for the first time. At that moment it whipped itself around me, grabbing me tightly for years and years. I dreamed of going, but I was a mess spiritually, emotionally, and financially. It became part of the “when I am thinner-happier-free-from-debt-more-fit-have-time” series of unmet desires that were the furnace that fueled my largely unlived life.

What I did not realize at the time, and frankly am only realizing now, is that my Camino began before 1992 and carries on to this day. OK, that latter part has been clear. As I prepared to submit what I had written for this post, this realization caused me to ditch it all and begin anew because that’s what a pilgrimage does–whether done in place or on the road–because honestly, all life is pilgrimage.

On September 18, 2016 I set foot on the famous pilgrim path that leads out of the storied town of St. Jean Pied de Port in the French Pyrenees. Fresh from the Catholic pilgrim mass held at the small church that Sunday morning, I felt a combination of joyful anticipation and terror. It was exciting to see everyone leave their backpacks unattended at the rear of the church, a challenge to my American-keep-your-belongings-close self. Also, everyone was both clearly welcome at the mass and clearly not everyone was Catholic. This dual circumstance repeated itself dozens of times over the next 35 days. In fact most people I encountered were not Catholic, or if they were, they were not practicing.

Another thing that was embedded into the 35 day, 500 mile trek was that it felt so much like Lent. Despite having spent countless hours paring down my belongings prior to my departure, weighing everything and trying to keep my pack to 10% of my body weight, I very quickly realized I had to start ditching things. In daily life it is easier to just keep everything, both physical and spiritual, but on the road you become painfully aware of what does not belong and that it must go. It reminded me of so many broken Lenten promises from my past, but this time there was no margin for fudging.

All sorts of things were jettisoned along the way, but for good or ill, those things got put in a box and posted to future destinations. True enough, we did not need the warmer weather clothing once we got past the first two days, so that could wait, but looking back, I would carry a different load, trusting more in God, and less in my own ideas. Mostly what had to get ripped out of my spiritual pack were expectations that weighed me down and were a fast track to disappointment and disillusionment. Those things could not be mailed ahead; they truly had to go.

Fear was the first challenge. I am terrified of heights and after a few tumbles in my life, I am afraid of falling. It should not have come as a surprise that there would be a lot of climbing to high places, but that the worst part would be coming down. Fear did not want to get tossed, so that took awhile but eventually it went out the door out of necessity, but not before more than one episode of me skittering down a steep and rocky path, terrified to put one foot before the other. This left me with a challenging metaphor for so much of my life.

Expectations were another non-tangible item that I was carrying around. Having read a ridiculous amount of Camino-themed books since 1992, and having watched the film The Way more times than I care to admit, I had certain images in my head. Not so much the physical, but images of what my spiritual highs and peak experiences might be. Guess what!? Life is not like the movies. As someone in my very late 50’s at the time, how did I not have a more realistic view? And how did I not have a cleaner spiritual slate? Expectations had to be dropped, bit by bit, with each passing step.

I would be lying to you if I told you that I no longer was afraid or no longer full of misguided expectations. Being human, I have lots of both, but I will say that having walked the Camino, it is more a case of ditching them more quickly when they pop up. Most of the time, anyway–well, some of the time.

In terms of my Catholic faith, my Camino also further revealed something I already knew… not everyone is Catholic. The majority of pilgrims I met were anything but Catholic. Atheists, agnostics, Protestants, Jews, and all sorts of people. Now there were many Catholics of the lapsed variety, and that made sense too. It was a reinforcement of my belief that God calls us together as one, and now that there was more room in my spiritual and emotional bag, it became ever clearer. My faith got richer; my religious experience as a Catholic is harder to categorize.

One pilgrim remains very much in my heart. I met him close to the end of the journey; he came from another country, an upper-middle-class white man from a Western country. In his life experience, he had never really met anyone with a faith practice. This guy was in his 50’s, successful and well-traveled, but he did not know a single person who went to church on a regular basis. Yet, here he was, like the rest of us, walking and walking, searching, seeking, walking and walking onward. People and experiences like this were fruits of the tree of that Lenten value, emptying ourselves out. Honestly, he had more of an influence on me than I would have imagined.

This Lent, even compared to last Lent, has been a revelation in what letting go and getting rid of means. Sure, the pandemic started during our prior Lent. That said, I know I was too gobsmacked at that time to put any pieces together. This Lenten journey feels like the ongoing Camino, a continuation of shedding the unnecessary and clearer views of the truly important. Like the Camino, there are long, dreary stretches, some ups, some downs, and days when I feel like I can’t possibly take another step. Yet eventually I do just that.

Make no mistake, I still feel afraid of a lot of things, I still have unmet dreams due to my old fears and worries. Heights will always be a problem to me. And “stuff,” physical and non-physical, weighs me down. However, I remain committed to the ongoing release of those weighty items in my soul and in my daily life. Sometimes I mail them ahead, but I do try to let them go like a deep exhalation of breath.

May this Lenten journey bring us all to a place where we can walk and breathe, let go and embrace, live and love without the encumbrances of carrying too much – especially if one’s heaviest burden is some kind of organized church. Let it go, follow the road of the Spirit, and when that seems impossible, call forth the inner pilgrim that lives in our souls. That inner pilgrim will remind you to begin each day anew, starting over, ever over and over.
Fran Rossi Szpylczyn (pronounced SPILL-sen), a former corporate executive turned writer and church worker, is the Pastoral Associate for Administration at the Church of the Immaculate Conception in Glenville, NY.  Fran has extensive experience facilitating faith formation for both teenagers and adults, directing retreats, and public speaking. In 2016 she fulfilled a life dream when she walked the 500 Camino de Santiago.

A published writer, her work has appeared in numerous books, online forums, and publications. She was a charter contributor the Homilists for the Homeless series published by Clear Faith Publishing, and a regular contributor to Give Us This Day published by Liturgical Press. A longtime social media advocate, she has a blog called There Will Be Bread. 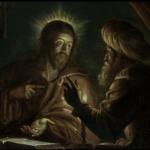 March 12, 2021 Dark Devotional: Darkness and Light
Recent Comments
0 | Leave a Comment
Browse Our Archives
get the latest from
Sick Pilgrim
Sign up for our newsletter
POPULAR AT PATHEOS Catholic
1