I took a week off writing and forgot how to write.  So here are some miscellaneous word-thingies about life with our lovely Baby Benny, who is six days old today. 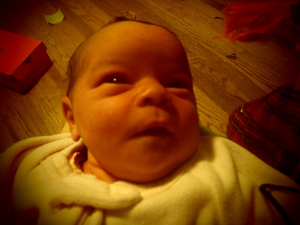 We originally chose Benedict Renée Fisher, thinking “blessed and reborn” was pretty awesome, with the bonus of a tribute to our beloved pope and St. Benedict.  But then we realized her initials would be BRF, which any self-respecting sibling would immediately and permanently identify as BARF.  So Renée was out.

When it became clear that the little stinker intended to be born in December, and not November, we started to think about more Marian names.  Maribel is for Mary, of course, with a nod to Our Lady of Guadalupe (whose feast is one of three due dates I was given) because . . . um, it sounds kind of Spanishy.

I tried really, really hard to give birth on Dec. 7, but the pious child simply wouldn’t budge until the feast of the Immaculate Conception (two minutes into Dec. 8, to be exact).

Furthermore, when I was in early labor, I had the sudden idea to use the Sh’ma Yisrael (something I haven’t thought about in years) as a mental chant while doing my useless breathing exercises.  The Sh’ma is a short prayer derived from the Torah.  It’s sort of the anchor for all Jewish prayer:  “Hear, O Israel: the Lord our God, the Lord is one.”  You say it in the morning and in the evening, and, if you can manage it, as your last words before you die.

So I went with it.  After the birth, my mother reminded me that Edith Stein, the great Jewish philosopher, who converted to Catholicism, became a nun, and was martyred in the Holocaust, took the name Theresa Benedicta with her vows.  So, Benedicta again!  This child has, at last count, four patron saints, including one with an apparent penchant for making cryptic suggestions to women in labor.

I hate, hate, hate giving birth, and this one was, to be honest, one of the most scary and unhappy labors and deliveries for me, although it’s hard to say why, since there were no medical complications and I had so much care and support from my husband, family, friends, and doctors.  So I will spare you the birth story, and instead I’ll take Jen Fulwiler’s advice and put it into haiku form:

THE BIRTH OF BENEDICTA MARIBEL

And I appreciate it!

(I threw out those socks.)

And we got us one of these: 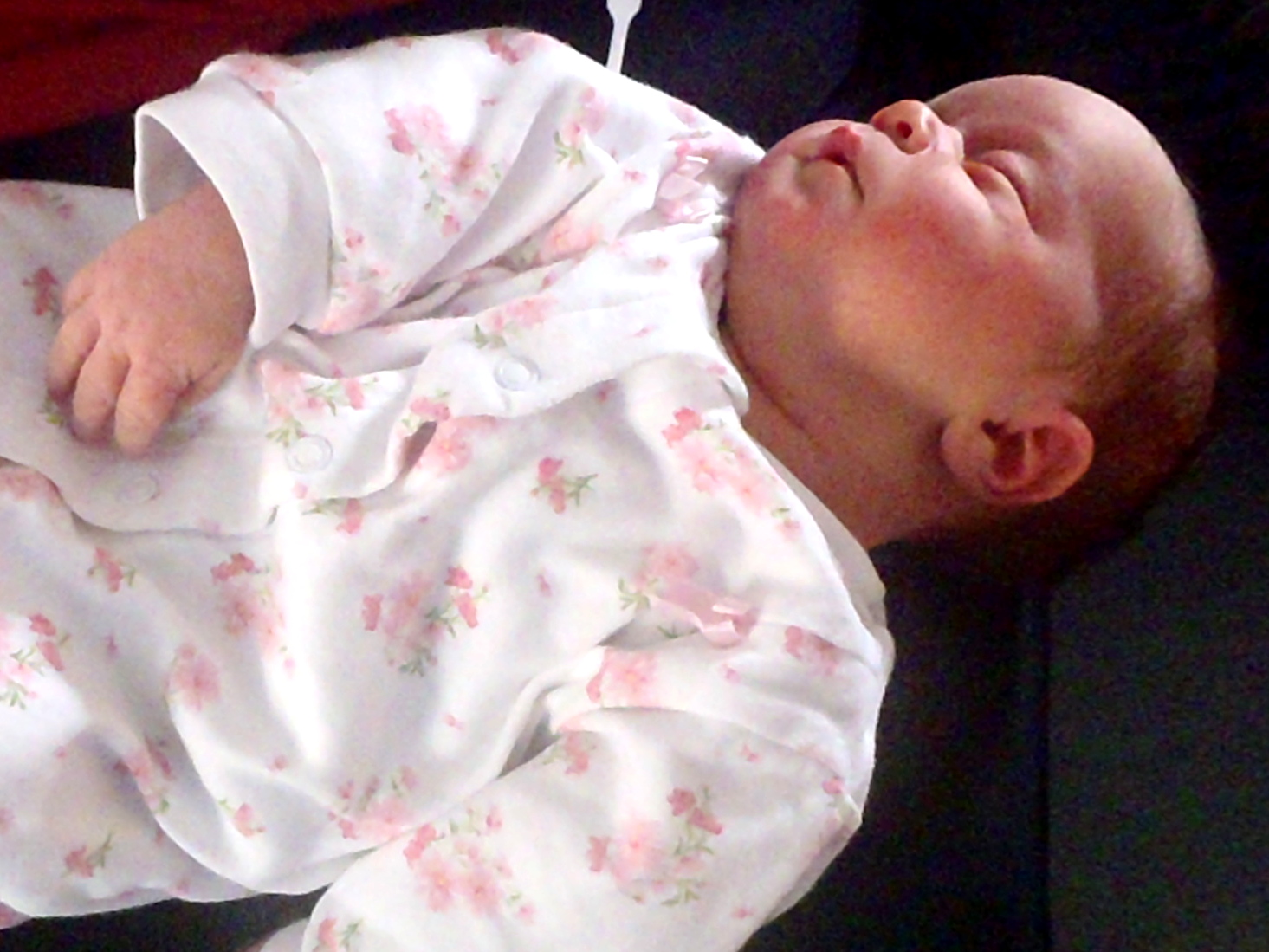 So that turned out okay.  Let’s see, what else?

The kids are all more or less bonkers over her. 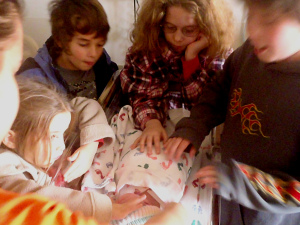 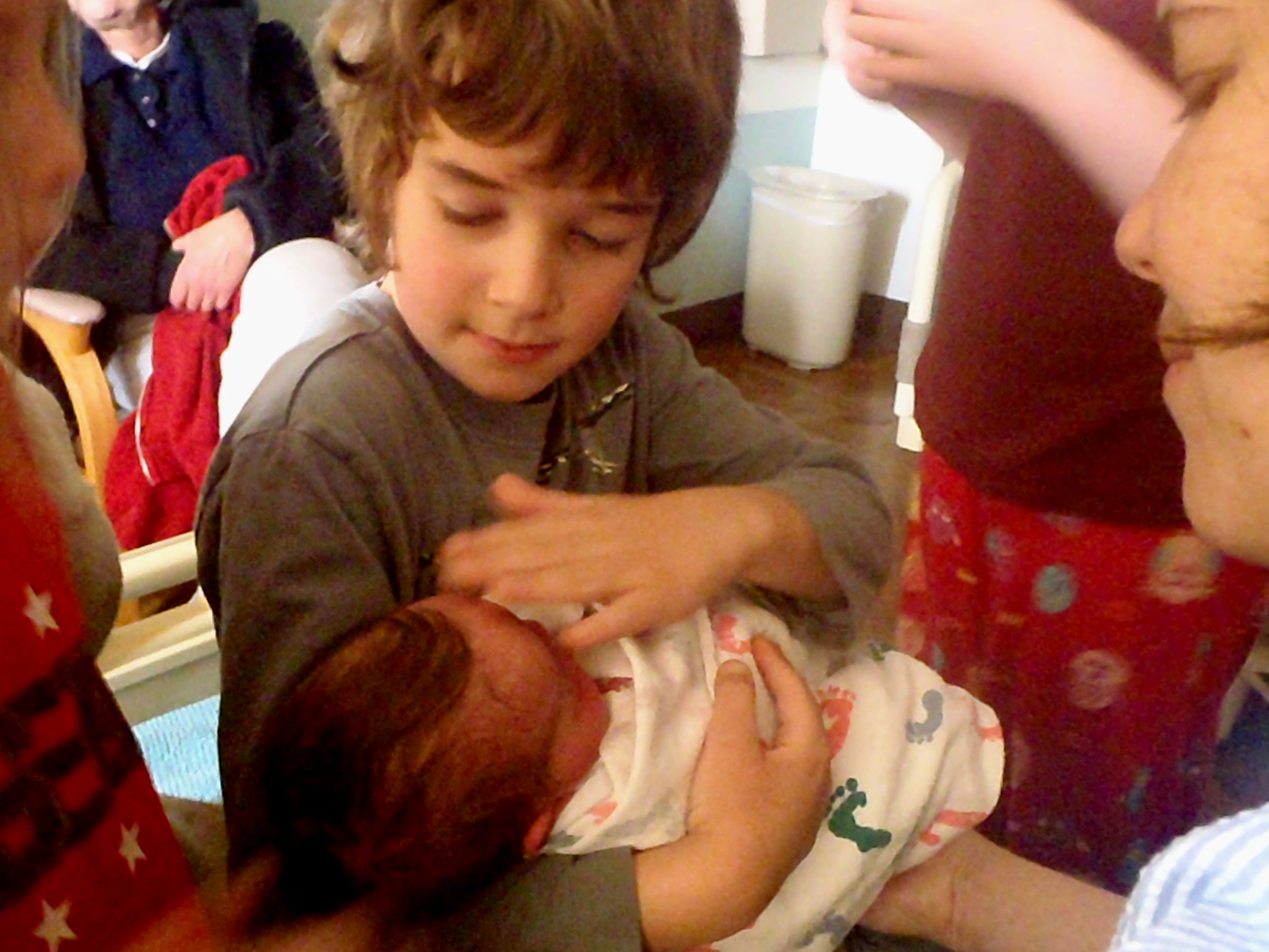 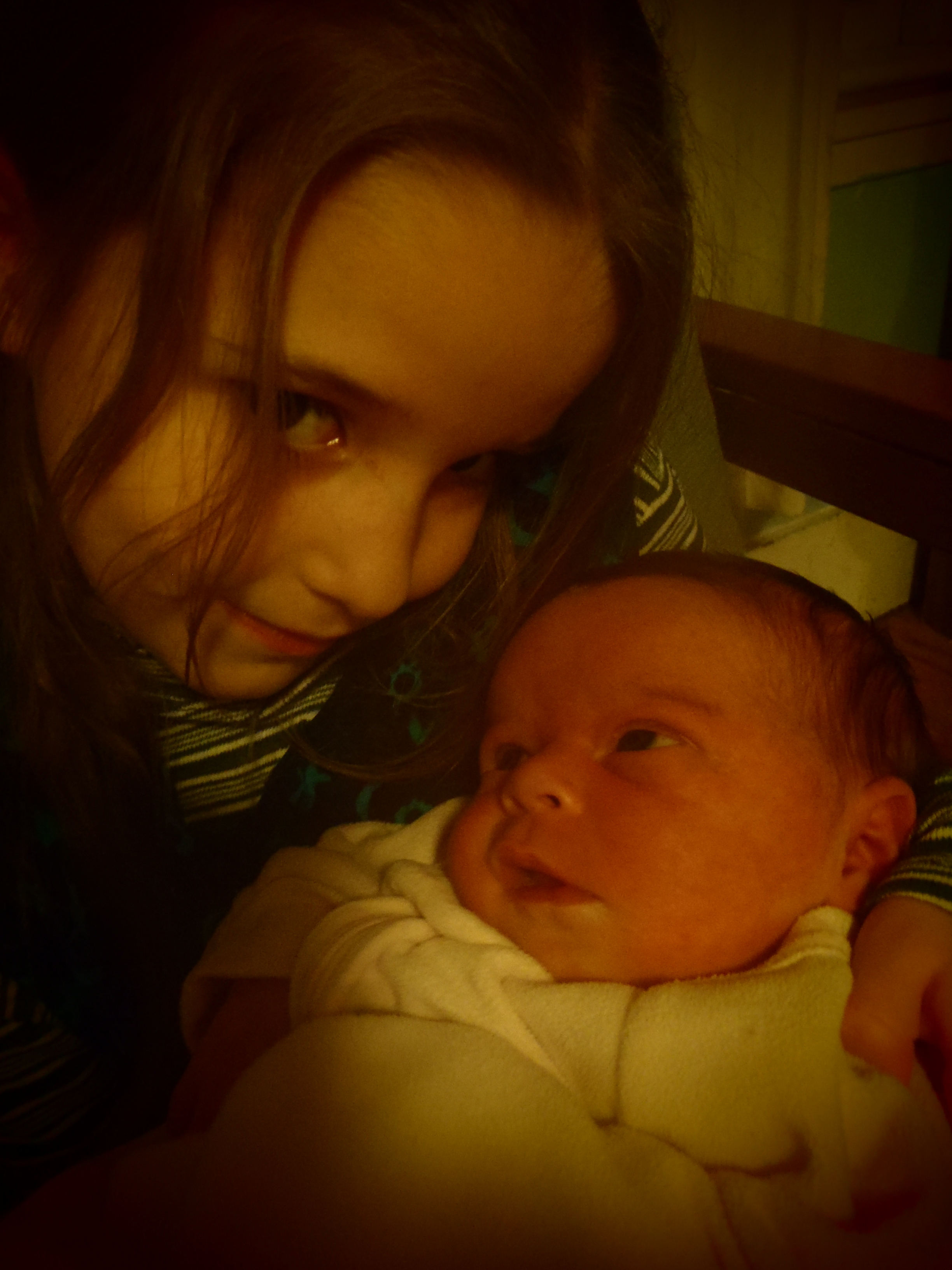 Irene, who is 2 1/2, did not get the memo about how the birth of her baby sister would turn her little world upside down.  So far, the only thing that’s upset her is the horrible belly button — she burst into tears the first time she saw it, and we were all much relieved when the scary stump fell off. 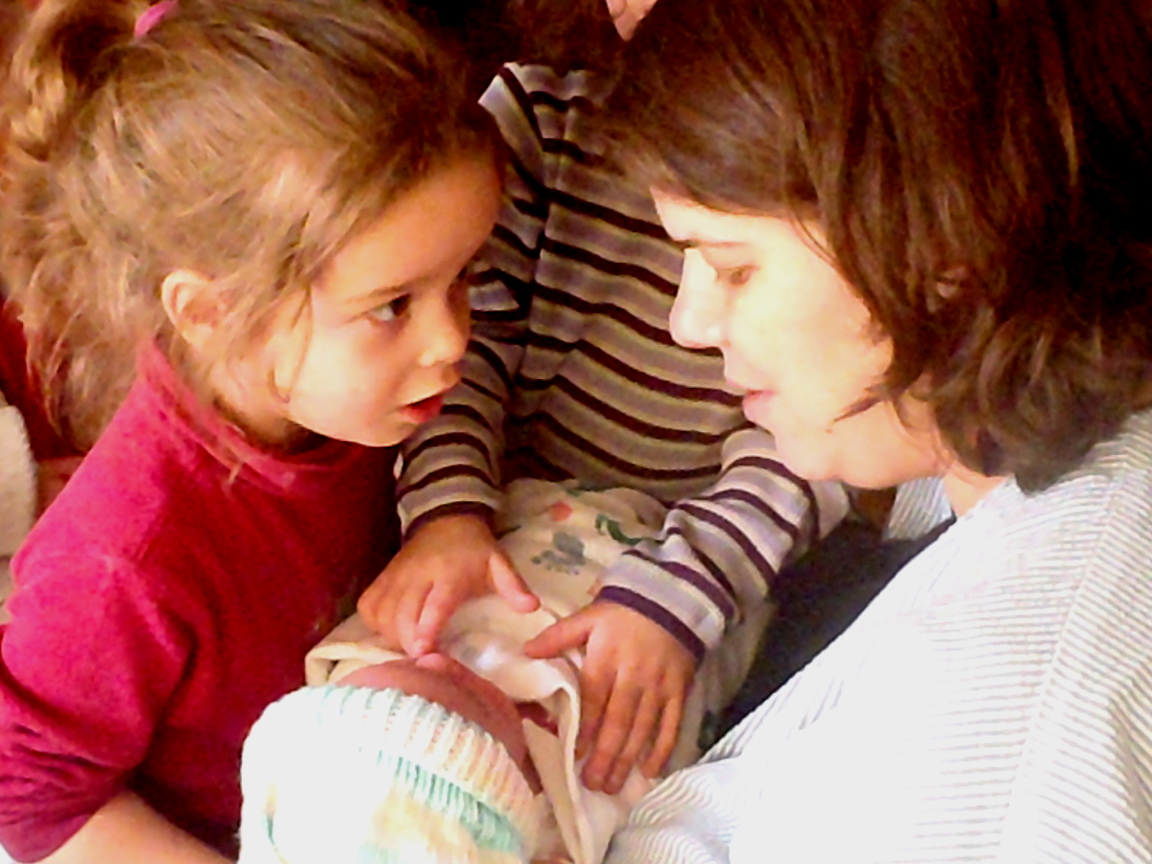 Yesterday, she said, “Mama, fanks for building Benny in your belly.” 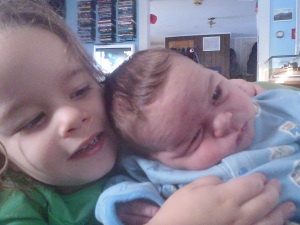 She and Lucy (the little ones at home) are slightly disgusted by my negligent care of the baby, and are constantly reminding me, “Remember, don’t sit on the baby!  I fink she’s hungry, Mama.  You should feed her.  Be careful, don’t get jelly on her.” 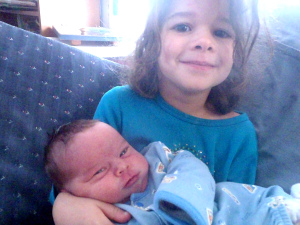 It’s a good thing I’m married to my husband, because it would be very awkward to be this much in love with a man who’s shown such tender, generous care and attention over the course of this year.  I had such wild expectations of how very happy we would be when we got married and had lots of kids, but this is more than I was even capable of imagining.  Thanks for the babies, Damien.  I love you. 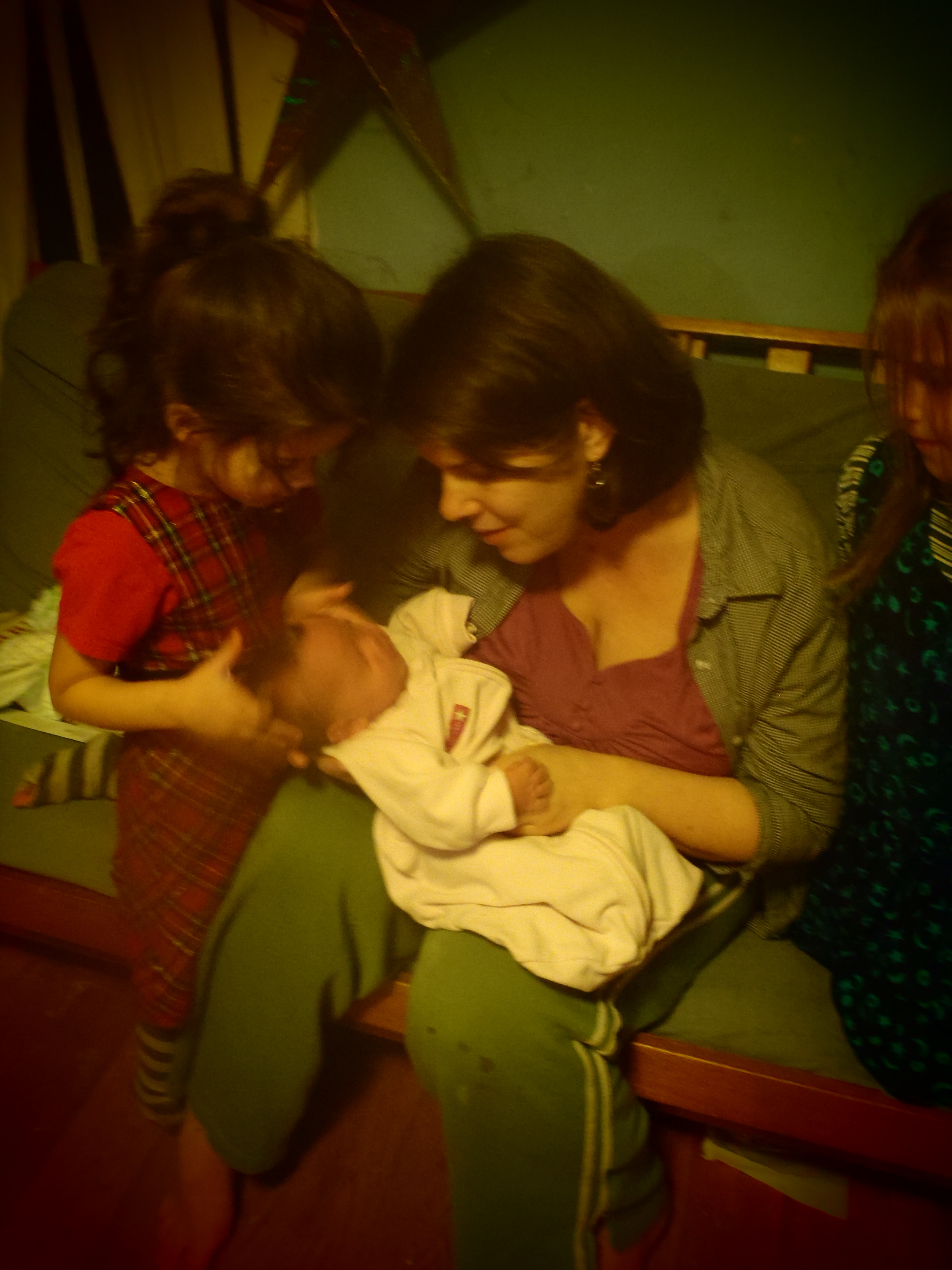 I’m so very, very behind in thanking everyone for all the prayers and good wishes on this blog, on the Register, and through Facebook and email.  Please do know that I was glad and grateful to read every one!  I know it’s not easy to spare prayers and concern for others when everyone’s lives are so full and complicated.  It’s truly wonderful to have so many friends, and to know that my little one is so welcome in the world. 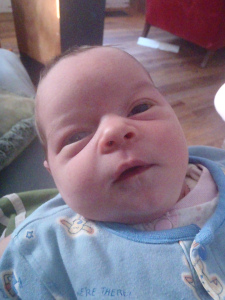 And my wonderful mother-in-law, HM (I’m not being discreet — she goes by “HM”) dropped everything and cared for everyone for some long, long days while I got back on my feet (more or less).  And my daughter’s friend’s grandmother showed up with enough food for an army, just when I was thinking, “Ugh, can’t put off dinner any longer.”   And my parents made the trip to see their 36th (?) grandchild, bearing presents and bagels: 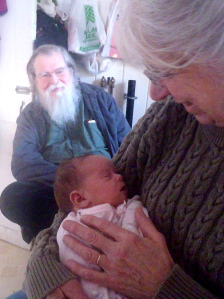 AND THIS IS AWKWARD, BUT:

Jen Fulwiler has been hosting a sort of virtual baby shower for me over at Conversion Diary, and even went to the trouble of collecting a few pieces I wrote.  Jen has been a constant, gracious, and genuine support for my writing for many years, despite her incredibly full schedule of speaking and writing profound but accessible insights into the spiritual journey of a modern convert!  I can think of no better way for me to show my appreciation for her than to let her write me a check after people send her money for me. 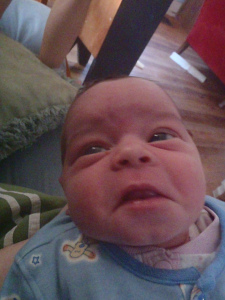 She also told me that I ought to tell you all about it (she will be taking the “donate” button down on Dec. 16), in case you accidentally forgot to spend enough money Christmas shopping this year, and have been wondering how to make your bank account a little more lithe and manageable. 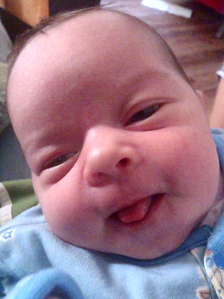 Phew, there, I did it.  Let us never speak of this again!  Hey look, here’s another baby picture: 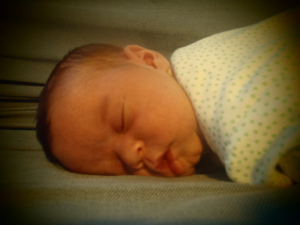 December 22, 2011 Eight Ways of Looking at a Baby
Recent Comments
0 | Leave a Comment
"Can The Jerk have this space now that you're done with it? I mean, it's ..."
Josh I’m moving!
"Thank you."
JohnHoward The hardest part of being a ..."
"[It isn't wrong.]Prove it."
Proud Amelekite The hardest part of being a ..."
"Wonderful Ideas for newborn baby and their parents also, its good to give them handmade ..."
Jeff Mccoy Welcome, baby! 12 gifts that new ..."
Browse Our Archives
Related posts from I Have to Sit Down