Love and betrayal and love again

I don’t have the mental energy to rehash everything that’s been said by me, Emma Smith, Leticia Adams, Calah Alexander, or anyone else in the debate over how to talk about fidelity in marriage.  If you missed it, you can probably count yourselves lucky!  It was a doozy.

But for anyone still standing, here’s what I keep thinking of: a passage from The Screwtape Letters. The “patient” — the soul the devil is trying to win — has converted, then failed, then returned again to God in true humility. Screwtape, the master tempter, says to his apprentice:

The most alarming thing in your last account of the patient is that he is making none of those confident resolutions which marked his original conversion. No more lavish promises of perpetual virtue, I gather; not even the expectation of an endowment of “grace” for life, but only a hope for the daily and hourly pittance to meet the daily and hourly temptation! This is very bad.

The first conversion, when everything was new and thrilling, was absolutely necessary. But it’s not sufficient. Here’s what Kate Kelmelis had to say on my Facebook page:

I’ve been following this exchange and when I think of the original article (and the other newlyweds who piped up in agreement) what came to mind was Peter. “Even though others may leave you, Lord, I WOULD NEVER”. And in response to Jesus telling him he would deny him not once but three times that very night, more confidence from Peter “I would follow you even to death!” We all feel that way when first in love. It’s not strange or unusual that young couples “know” that they could each “never” betray one another. Catholics and non Catholics alike feel this way. And like Peter there’s nothing bad about it really, except that they haven’t been tested. Until you’ve been put to the test you just don’t know what you will or won’t do. You don’t know who you are (or will become). Not to say adultery is an inevitably. Just that I’m really wary of ever thinking there are sins that “good Catholics” just don’t commit. Good Catholics are as vulnerable to temptation as anyone else. I don’t see why some people would get so offended by that fact. Is our love for our spouse more pure than Peter’s was for Christ? Seems doubtful.

Yes indeed.  And it was only after Peter realized that he was capable of betraying Christ that he became the head of the Church on earth.  It was only after he sinned and was forgiven that he had the strength and courage to die for the one he loved.

And I have something else to say.

Many people are complaining that it’s dangerous or scandalous for engaged people or newlyweds to hear married people speaking about infidelity or betrayal of various kinds.  This may be true; but it’s also true that we’re not always talking to engaged people or newlyweds. Not everything that’s said in public has to be specially tailored for every conceivable audience.   It’s okay for people to discuss things that don’t apply to you or aren’t aimed at you.  If you are reading something that is upsetting or scandalizing you, stop reading. It’s really that simple.

If I were thrilled to be pregnant with my first child, I wouldn’t spend hours and hours reading about the reparative therapy that babies go through when they have serious birth defects. It would FREAK ME OUT, and rob me of the joy of my pregnancy. But it would be insane for me, as a pregnant women, to say, “I know that my baby will never go through that, because I take my vitamins and eat kale and get plenty of sleep.” And it would be downright offensive to tell mothers of those other babies, “You can’t say these things in public. It’s sad, and might scare other women away from wanting to have children.” 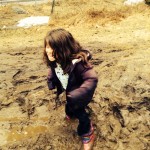 March 28, 2014 Springtime in New Hampshire
Recent Comments
22 Comments | Leave a Comment
"Can The Jerk have this space now that you're done with it? I mean, it's ..."
Josh I’m moving!
"Thank you."
JohnHoward The hardest part of being a ..."
"[It isn't wrong.]Prove it."
Proud Amelekite The hardest part of being a ..."
"Wonderful Ideas for newborn baby and their parents also, its good to give them handmade ..."
Jeff Mccoy Welcome, baby! 12 gifts that new ..."
Browse Our Archives
Related posts from I Have to Sit Down