Ad Orientem and Versus Populum both make sense

Here we see a cartoon meant to illustrate why it “makes more sense” for the priest to be facing the altar and the crucifix, as he does when celebrating the Traditional  Latin Mass:

I’ve seen this cartoon in various places, most recently here. It’s cute, but misleading. Recall what the catechism says:

1368The Eucharist is also the sacrifice of the Church. The Church which is the Body of Christ participates in the offering of her Head. With him, she herself is offered whole and entire. She unites herself to his intercession with the Father for all men. In the Eucharist the sacrifice of Christ becomes also the sacrifice of the members of his Body. The lives of the faithful, their praise, sufferings, prayer, and work, are united with those of Christ and with his total offering, and so acquire a new value. Christ’s sacrifice present on the altar makes it possible for all generations of Christians to be united with his offering.

When the priest and Christ crucified are both facing the same way, it brings out the idea that Christ allows us, with the priest as a mediator between heaven and earth, to share in the sacrifice that He re-presents to the Father.  This is particularly obvious during the Elevation, when the priest raises the consecrated Host above his head, and the congregation makes a profound bow.

May 13, 2014
At the Register: Tug of War at Harvard Is a Sign of Good Civic Health
Next Post

May 15, 2014 At the Register: A Few Tips for Making Hard Choices
Recent Comments
54 Comments | Leave a Comment
"Can The Jerk have this space now that you're done with it? I mean, it's ..."
Josh I’m moving!
"Thank you."
JohnHoward The hardest part of being a ..."
"[It isn't wrong.]Prove it."
Proud Amelekite The hardest part of being a ..."
"Wonderful Ideas for newborn baby and their parents also, its good to give them handmade ..."
Jeff Mccoy Welcome, baby! 12 gifts that new ..."
Browse Our Archives
Related posts from I Have to Sit Down 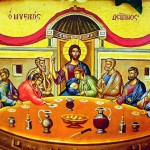 Catholic
Food, Love, Law, Jesus: It's All the Same...
I Have to Sit Down 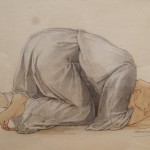 Catholic
Nobody told me!
I Have to Sit Down

Catholic
At the Register: The Tabernacle Holds the Heart...
I Have to Sit Down

Catholic
At the Register: Why busy parents should always...
I Have to Sit Down
TRENDING AT PATHEOS Catholic