Yay, it’s Friday! Time for the What’s For Supper? round up, where you can share your inspired, inspiring, dull, or humiliating weekly menu, or pass along recipes, or find recipes, or just complain about food and feeding people and eating in general. Most of us think about food a lot, so why not talk about it here?

At the end of this post, you’ll find an InLinkz button, so you can add your post. Feel free to join in in the comments, too.

Here’s the inaugural What’s for Supper? post,
and here is vol. 2.

Is Friday the best day to post these? I leave the link-up open all week, so people can add to it whenever they like.

What about a question of the week? Something like, “What’s your favorite potluck dish?” or “What’s the best thing about cold-weather cooking?” or “Where are all these moths coming from, and should I just kill myself now, or what?” Or should I just keep it free-form?

And here we go.

Kingston Pizza on the way home from the beach.

I’m linking to this restaurant not because the food was so outstanding (the fries were yummy, though), but because I feel bad that we drank bottled water from the van instead of ordering drinks, and I feel like we owe them. I had a cheesesteak. In Kansas, I met the inimitable Catharine Bitting, and I asked her why Philadelphians would let an empire rise and set on whether or not a candidate properly understands a cheesesteak. It’s just a sandwich, after all, yaas? She explained it’s because Philadelphians’ lives are so empty and miserable, they have nothing else to live for, so they focus all their energies on cheesesteaks.

We had gotten about five hours of sleep all weekend, and so on Monday, I went shopping without a list. I just grabbed the panstless baby and lurched through the aisles grabbing anything that looked familiar. So the rest of the week looked like this:

Monday: Brats, potato chips, salad (a real one, not a “let’s say we had salad” salad), and five avocados that were right on the brink.

We are close to being tired of pulled pork sandwiches, but we are not there yet! Aldi has these wonderful boneless half loins for $2.29 a pound, so I get a 4- to 5-pound hunk, put it in a shallow pan, pour a can of beer over it, salt and pepper it generously, cover it loosely with tinfoil, and chunk it in a 275 oven for a few hours. When it’s done all the way through, I slice or shred it with fork, knife, standing mixer, or whatever, and toss the fat to the dog so that he will continue to worship me as a god. The meat comes apart more easily if you work on it while it’s still hot. Then I throw the shredded meat right back into the beery juices

cover it with foil again, until it’s time to reheat it for dinner. It just gets better as leftovers, IF ANY. And I just use bottled BBQ sauce, because my homemade kind never thickens up enough. Go ahead, tell me what an inauthentic heretical pulled pork poseur I am. I can take it. I’m fortified with pork.

Re the potatoes, I was thinking, “Oh no, I just did oven roasted potatoes last week! Everyone will be bored reading about it again!” But then I remembered my kids really like oven roasted potatoes, so that settled that. I found a few envelopes of onion soup mix, so I used that for a quickie seasoning. It turned out not to be any faster or tastier than whatever seasonings I usually grab off the spice shelf.

Wednesday
Sliced chicken breast served over salad and various raw veggies with bacon ranch dressing, and naan (from a mix that was on sale at Aldi).

For the chicken, Benny and I made a quick marinade of olive oil and lemon juice, with the Faithful Four: salt, pepper, oregano, and crushed garlic. She pronounced it “gross nemmonade,” and warned me that I would die if I ate it.

Duly noted. You let the chicken sit in the marinade for a few hours, then put it in a broiling pan under a high broiler for 15-20 minutes, turning once, until it’s golden brown. Let it sit for a few minutes (this lets the juice redistribute along the meat fibers or something) and then slice it. This meal makes me feel SO VIRTUOUS, I can hardly live with myself.

This is the first time I’ve made naan. I’ve never even eaten it before, so I have no idea if I did it right. Except I’m pretty sure I wasn’t supposed to burn it.

I think I didn’t make them flat enough. They turned out more like pancakes, and didn’t have the bubbles I see in pictures.

I just glugged a bottle of sauce over the chops and let them sit a couple of hours, then put them under the broiler for a short time until they edges were crisp. The kids begged for flavored rice, so threw some bouillon cubes into the water (one cube per cup of water) before adding the rice. I did manage to cook the peas until they were hot, so that was a win.

Before I discovered the bottle of teriyaki sauce, I asked Facebook for simple pork chop recipes made with non-exotic ingredients, which Facebook was happy to provide! It’s a long list, so I will make it a separate post, which you can see here.

Friday
I have no idea.

Did I mention I never actually made a meal plan this week — just kept putting meat in the cart until it looked like I had enough meat? I’ll have to buy something on the way home from school this afternoon. Probably spaghetti, le sigh.

Don’t forget to check out the separate pork chop post! There are dozens and dozens of simple ideas there. 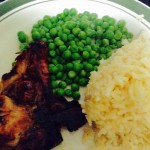 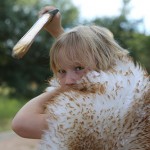 September 5, 2015 Boys with sticks
Recent Comments
17 Comments | Leave a Comment
Browse Our Archives
Related posts from I Have to Sit Down