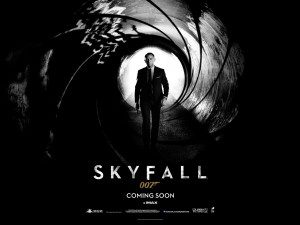 If “Quantum of Solace”, the last James Bond movie, was remarkable for themes of social justice, then the new Bond cat-and-mouse film is just as remarkable for its theology. Well, kind of. It’s more about God embracing James Bond then the other way around. But who knows what will happen in movie 24 of this 50-year franchise when it comes out at some future date?

In this latest installment of 007’s next incarnation James (Daniel Craig) is riding a motorbike up and down staircases and  across the roofs in Istanbul, in hot pursuit of a man who can lead them to whoever stole a hard drive with the names of NATO agents embedded in terrorist groups around the world (I recognized the roofs from “The International”).  Another agent, Eve (Naomie Harris) shoots him by mistake at M’s (Judy Dench) remote command and he falls into a river and off the grid for quite a while. He’s tired of the hunt and chase and takes a vacation in “death” but when MI 6 (British spy central) is attacked he returns to London.

Meanwhile, M is ordered to testify to the Intelligence at Security committee at Parliament as to why the hard drive had gone missing.  Garreth Mallory (Ralph Fiennes) heads the committee and strongly suggests that M retire. When he and Bond finally meet, Mallory wants to know why Bond didn’t just stay dead and get out of the game.

M and MI6 thought Bond was dead so they sold his flat and put all of his belongings, or so she thinks, in storage.

A new Q (Ben Whishaw who was in “The International” and has actually appeared before) reveals himself to Bond. he is a nerdy computer genius who gives Bond a new gun and a tiny radio.  Even though this isn’t the most interesting pair of gadgets we’ve come to expect,  they get the job done (as for the gun, a komodo dragon makes off with it and Bond chooses not to follow.) That little radio proves quite handy.

Soon Bond is on the trail of someone who is threatening M and who turns out to have the drive.  The nemesis is Silva (Javier Bardem looking very much like a “Twilight” vampire), a British intelligence agent that M once gave up to the Chinese in return for six other agents. She had no remorse then and she has none now and we don’t know why.

When they finally encounter one another Silva asks Bond what his hobby is and he replies: “Resurrection.” Silva’s is wreaking revenge on M by an elaborate plan he has taken years to devise – years in prison and under torture.

Bond outwits Silva (but not before Silva murders the beautiful girl, Severine, played by Bérénice Marlohe, that he kept from youth as a sex slave) then captures him and brings him back to London. MI6 is now underground but this is not problem for Silva who manages to escape through London’s underground tube system (making me think of Hammer horror films and rodent transport system).

Bond drives his classic Aston Martin DB5 and he and M head for Skyfall, the remote Bond family estate in Scotland.  Now abandoned but recently sold (because Bond was thought dead), this is where his family was living when his parents were killed.  They plan to draw out Silva once and for all. The caretaker, Kincade (Albert Finney), works with Bond and M to get ready for Silva’s assault by setting all kinds of exploding booby-traps.

The key escape route is through a “priest hole” where priest’s used to hide when celebrating mass was outlawed. It leads into a tunnel that opens up near the estate chapel.

When Silva sees Kincade and M’s light in the chapel he heads that way but Bond and one of Silva’s men end up in a life struggle when they fall through the ice cover on a pond. Bond wins and encounters Silva in the chapel, two rats fighting to the end. He grabs M, daring Bond to shoot, but Kincade uses a most primitive form of technology to bring down Silva and save the day but not M. She dies from a wound she received earlier (an injury that hardly seemed serious enough to cause her death.)

I don’t think Bond’s spiritual journey in this film is all that profound but if you look at it through the lens of the last two films, “Skyfall” is a conceivable, if not consistent, storyline. If you look through the visual motif of water as a cleansing agent and symbol of eternity – and ice as hell – you get it.

Bond seems a changed man but looses the love of his life in “Casino Royale” (2006; for the second time actually. His only wife, Tracy, is killed in “On Her Majesty’s Secret Service”) and while seeking revenge in “Quantum of Solace” (2009) he manages to assure that a Latin American country is able to hold on to its most valuable of natural resources: water. This is more than just hunting down spies, it is something generous and positive. Now in “Skyfall” Bond seems dispirited, almost depleted, as he continues the chase. He is already wounded then shot again by one of his own people. He keeps falling into water, first a river and at the end he lunges across the frozen tundra of Scotland then plunges through ice – to be washed and to rise again. It’s almost as if he is transcending Dante’s purgatory and inferno to live again.

M is told to “think on her sins” over and over again via anonymous computer messages. Maybe Silva wants to be some kind of priest dispensing absolution. Hmm. Instead he dishes revenge.

About M. When Bond returns he has to pass all kinds of physical and psychological tests before he can return to service. He fails but M tells him he passed, “just.”  Is she trying to get rid of Bond as she once tried to get rid of Silva?

Will 007 ever find inner freedom or paradise? Maybe this is the next film. And if Daniel Craig’s Bond only endures for two more films when his contract expires, the franchise will surely rise again if it ever really demises.

Thinking about freedom … the idea of free will and determinism is present here. Think of the rat analogy. It presents, through the words of Silva,  a pessimistic view of human life and existence. Rats fight to survive amidst decay and refuse; they don’t choose. It’s their nature. Rats fighting to the death is conjured up by an angry, depressed, soulfully injured by betrayal, and now, if not before, mentally ill man.

How is Bond, and MI6 and people like them, and their foes different from rats fighting to the death? Is this inevitable? Maybe because the ending happens in a chapel we can hope not. But is this idea remotely possible in Bond’s universe? I am not sure. The chapel is in ruins. What does this mean? One could ponder this (or ask the writers if they even know.)

Kincade, M and Bond escape through the priest’s hole and the tunnel to their “salvation” like a new birth. Perhaps the idea of a priest praying, even 500 years before, will bless them. Silva goes across land to the chapel, unwashed and unblessed, and ultimately is killed.

The chapel is decrepit and in bad repair, like Bond himself. It is a suitable arena for both men to choose their destiny. It is only Kincaid who spares Bond another killing notch on his belt for obviously Silva, the bad guy, must die.

Death is another theme that is dominant in the film; note the yacht sailing from Shanghai to a mysterious island is a crossing from life to eternity.

Love is probably the most contested theme in the film. Was Silva in love with M? Or was she his mother-figure? Or both? This adds an interesting tension to the film but I think it can read, like the rest of the story, any way you wish. Again, M wanted to be rid of Silva but what explains her way of treating Bond?

Does any character stand for or exercise transcendent love in the film? I think it is Bond himself who comes closest to selflessness. What do you think? What does Bond think of himself I wonder?

In “Quantum of Solace” and even “Casino Royale” we saw that Bond was more than a spy; he had feelings and his love for his fiance made it appear that he was ready to become a different man. Here Bond’s acumen is “maturing” but he seems the same Bond that he ever was.

Fear is also a theme but I don’t think it is ever resolved. Why? Because this spy stuff is the “work” that Bond and the others are in: violence begets violence. It is an industry, as are the movies that turn violence into entertainment. Elegant entertainment. M, Bond, and the others had best be afraid because violence is relentlessly self-consuming and self-perpetuating. Ultimately it solves nothing.

At the end, I was sadder to lose Judy Dench as M than M herself.

Ralph Fiennes is the new “M”. Eve is the new Moneypenny and Q, well we’ve seen both of these characters before.

Moneypenny smiles us into the sequel after reassuring us that Ralph Fiennes will make a solid new M.

We see the headstones marking the graves of Bond’s parents Andrew Bond and Monique Delacroix Bond. I was glad to see a family connection but it wasn’t enough to move me, if you know what I mean.

A note on the violence

“Skyfall” is well constructed which means the script must be pretty good even though it had three writers which usually means death to a decent story.  It is well-directed by Sam Mendes. It has humor (and a little camp). The cause-effect cat-mouse sequencing is seamless, so kudos for the editing. Some of the scenes are beautifully structured and filmed. The rating is PG-13 which means that there is no flowing blood so the impression is as if seeing a video game, or what you know will most surely become a video game. The violence is elegantly choreographed and danced, almost as if a ballet.  And it is relentless. I don’t believe that sanitizing violence of the means of death, bloodletting, makes a film a work of art or suitable for children under or over 13, accompanied by a parent or not. I think the end result is generations of kids who don’t understand pain and the consequences of violence.  “It’s just a movie!” Until it isn’t.

November 5, 2012
Metaphors and Journeys of Faith in the Life of Pi & Big Fish
Next Post

November 12, 2012 Park Avenue: Money, Power and the American Dream, PBS, check local listings & Hulu
Recent Comments
0 | Leave a Comment
Browse Our Archives
get the latest from
Entertainment
Sign up for our newsletter
POPULAR AT PATHEOS Entertainment
1