The “Stories We Tell” is art that reveals truth 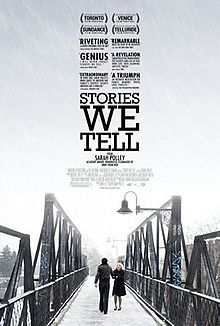 Canadian director and former child actress (Avonlea), Sarah Polley, has made an fascinating  kind-of documentary about her family, and her parentage especially, in “The Stories We Tell.”

From her mother Diane’s death when Sarah was eleven years old, rumors began to circulate that her biological father was not the father who raised her, Michael Polley.

Over time Sarah decided to tell her story via a documentary film, even though some cast members are actors. She looks at the nature of memory and story to create a thoroughly engrossing narrative.

Her mother Diane was a stage actress with a large, outgoing personality who married a British actor, Michael Polley, who is the exact opposite and they had two children.  Michael is the overarching voice narrator and he tells us that he thinks she married him because of the characters he played rather than who he was. They were very happy in the beginning but Diane found Michael dull and Toronto confining. She got a role for a stage play in Montreal and Michael agreed to let her go even though, according to the kids, he never did anything to help with the child-rearing or house-keeping. Michael recalls it differently and says he helped out a lot.

Michael went to visit Diane twice during her time in Montreal. When she came home, she was pregnant. Michael took it in stride but Diane was distressed and even considered an abortion. Her husband comes off as very nonchalant about aborting the baby (“It’s her body”) but Diane consults her brother, a doctor.  He is pro-life and encourages Diane to keep the baby. But Diane goes ahead and makes an appointment, cancelling out before she gets to the clinic.

Why does Diane, aged 41, not want the baby? What on earth does a child think, even an adult child, when she learns she could have so easily been aborted, a “problem” so easily done away with? Someone says Diane was worried about Down Syndrome, but we know that a secret is coming that will refute this excuse. Sarah Polley never addresses the fact that her mother nearly aborted her and I think it is the elephant in the studio, and needed to be addressed to give depth to the film. To me, the film is about Sarah Polley but we don’t hear from her or see her enough.

Sarah Polley gathers her siblings and other people who knew Diane who died in 1987. Sarah is the master narrator who goes around in circles to ask different people the same questions and see how their memories recall Diane and that rumor about who her father really is. Sarah’s gaze is a loving one but it doesn’t ever seem to involve her; she seems to stand outside the narrative, as if getting too close will confuse objectivity and subjectivity.

I liked this film a lot. It is masterful storytelling about “the stories we tell” but regardless of what people recall, a DNA test will answer all the questions and clarify memories.

“Art,” says one key character in the film, “is about revealing the truth.”

The question of just whose story this is to tell is front and center in the film as well.

Sarah Polley and her family have fulfilled this requirement. With the exception of one family member, according to press coverage, Sarah’s core family remains strong.

May 21, 2013 Arts & Faith at Loyola Press Interview
Recent Comments
0 | Leave a Comment
"When did this receive and Academy Award?"
Chrys Who Invented the “Jump Shot”? New ..."
"Character matters. Yeah? What then? Look what sort of character is running to grab power ..."
ounbbl The Hopeful Relevance of “The American ..."
"lol wut"
Bloodeagle 1917 is a relentless video game-like ..."
">To each their own I supposeSo you admit you wasted your time writing what you ..."
GoldRushApple Doubt the Movie
Browse Our Archives
get the latest from
Entertainment
Sign up for our newsletter
POPULAR AT PATHEOS Entertainment
1