“Cesar Chavez” is a stirring biopic 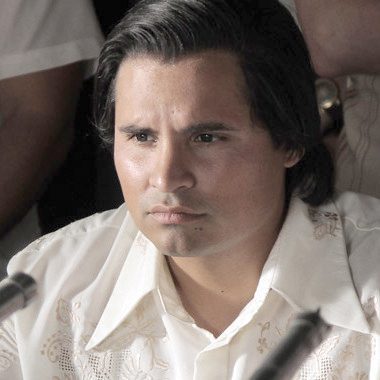 The film opens with Cesar’s (Michael Peña) decision to leave the Community Service Organization (CSO) in Los Angeles, where he had worked to encourage Latino workers to register to vote and campaigned for worker’s rights. We learn that as a child Cesar’s family had lost their ranch and home in Arizona during the Depression, and that the family had become migrant farm laborers in California. Cesar had worked in the fields from the time he dropped out of school in the seventh grade until he joined the Navy.

Cesar’s wife Helen (America Ferrera) gathers their eight children and the family moves into a cramped house in Delano, in the southern San Joaquin Valley. It is 1962 and Cesar begins his crusade to organize the migrant workers into a union. (Cesar also has to deal with his own son, who is failing in school and cannot understand his parent’s commitment to workers’ rights.)

Dolores (Rosario Dawson) joins Cesar and other volunteers as they take on the table grape growers in the San Joaquin Valley by urging the grape pickers to go on strike (following the Filipino workers who had gone on strike six months previously). Their goal: bargain for higher wages, clean water and portable toilets for workers in the fields.

Cesar and the strikers run up against several tough vineyard owners but the most aggressive is a man named Bogdanovich (John Malkovich). He demands that his rather spoiled and mean son (Gabriel Mann) become involved in putting down the strike. Sheriff Galen (Michael Cudlitz) takes his cues from the growers rather than the law and uses violence to break the strike.

Mass is celebrated in the fields to encourage workers to commit to the strike, even at great sacrifice to themselves and their families. The union begins a boycott of table grapes that extends across the U.S. to Europe, and Cesar goes up against both President Nixon and Governor Reagan who try to thwart the efforts of the union.

Finally a victory of sorts is achieved when Cesar leads a historic march from Delano to Sacramento in 1966. Senator Robert F. Kennedy (Jack Holmes) learns of Cesar’s work and meets with the workers and grape growers. In 1968 Cesar begins a 25-day spiritually motivated fast, the first of several, to promote non-violence.

“Cesar Chavez” is narrative film that only covers the first several years of Cesar’s work to obtain the right for farm laborers to enter into collective bargaining for better wages and working conditions. (It is not to be confused with “Cesar’s Last Fast,” a fine documentary that covers Cesar’s entire life.) It premiered at the Sundance Film Festival in January and has been picked up for distribution by Participant Media (release scheduled March 28).

In this 50th anniversary year marking the signing of the “Civil Rights Act,” “Cesar Chavez” opens up a whole new window on a movement that also gained national and international attention, that of migrant workers. Screenwriters Kier Pierson and Timothy J. Sexton create parallel struggles between fathers and sons, perhaps to draw us into the personal lives of the characters and learn the extent of the impact that the UFW movement had on their families (although I am not sure the story needed this plot line; I do wish Dolores Huerta’s role had been more developed).

Michael Peña and America Ferrera give solid performances (even if Peña looks a little too healthy after such a long fast). John Malkovich as the proud and vindictive farmer, is suitably threatening. His character, Bogandovich, is an immigrant from Europe and he cannot understand why his rights aren’t more important than those of the mostly Mexican (and Filipino) migrant workers who are also immigrants. Few people do the “bad guy” as well as Malkovich and this theme in the film was well developed.

What I liked about the film — which of necessity compresses the time and story — is that it is faithful to the Catholic ethos with which Chavez and Dolores Huerta imbued their movement for the rights of migrant workers. It is suitable for students from junior high on up and is sure to inspire.

Daughter of St. Paul Sister Rose Pacatte is director of the Pauline Center for Media Studies in Culver City. Her film reviews and essays may be found athttp://sisterrosehomepage.com/.

(This review appeared in The Tidings, the newspaper of the Archdiocese of Los Angeles, March 24, 2014)

March 24, 2014
Oscar Romero's Life in Music (short film on the 34th anniversary of his death)
Next Post

March 26, 2014 "Desert Wedding" a bridezilla's wedding day - Episode 4 Lenten Film Series
Recent Comments
0 | Leave a Comment
Browse Our Archives
get the latest from
Entertainment
Sign up for our newsletter
POPULAR AT PATHEOS Entertainment
1