My new book in production: ‘Martin Sheen: Pilgrim on the Way’ 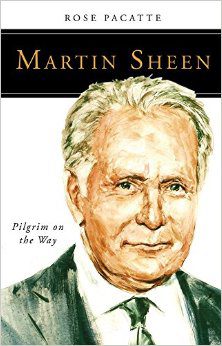 I received word today that my biography on Martin Sheen, entitled “Martin Sheen: Pilgrim on the Way” has progressed from the editorial department to the production department at Liturgical Press. They invited me to write the book as part of their “People of God” series.

You can pre-order “Martin Sheen: Pilgrim on the Way” by clicking here or you can order on Amazon.

The back cover reads:

“Martin Sheen, best known for his role as a Catholic president in the prestigious television series The West Wing, returned to the practice of his Catholic faith at the age of forty after decades away. After years of battling alcohol addiction, a near-fatal heart attack, and a nervous breakdown, the stage, film, and television actor renewed his dedication to his family and activated his faith with energy, grace, and joy.

“Through the sacraments, Mass, the rosary, the support of family, and numerous friends and peace and justice activists such as Daniel Berrigan, SJ, and the Catholic Worker Movement, Martin Sheen today sees himself as a man in the pew. He has been arrested more than sixty times for non-violent civil disobedience, speaking out for human rights. Sister Rose Pacatte’s unique biography moves beyond tabloid news to include information and inspiring stories gleaned from interviews with Martin Sheen, his sister and brothers, as well as long-time friends.

“People of God is a series of inspiring biographies for the general reader. Each volume offers a compelling and honest narrative of the life of an important twentieth or twenty-first century Catholic. Some living and some now deceased, each of these women and men has known challenges and weaknesses familiar to most of us but responded to them in ways that call us to our own forms of heroism. Each offers a credible and concrete witness of faith, hope, and love to people of our own day.”

But do take a look at their “People of God” series and their lineup of biographies. St. John XXIII, Thomas Merton, and Oscar Romero are already available.

October 18, 2014
'Call the Midwife' is a celebration of life
Next Post

October 25, 2014 Actress Roma Downey lends her voice to our annual Webathon
Recent Comments
0 | Leave a Comment
Browse Our Archives
get the latest from
Entertainment
Sign up for our newsletter
POPULAR AT PATHEOS Entertainment
1