‘The Good Dinosaur’ is a visual treat

‘The Good Dinosaur’ is a visual treat November 25, 2015 Sister Rose 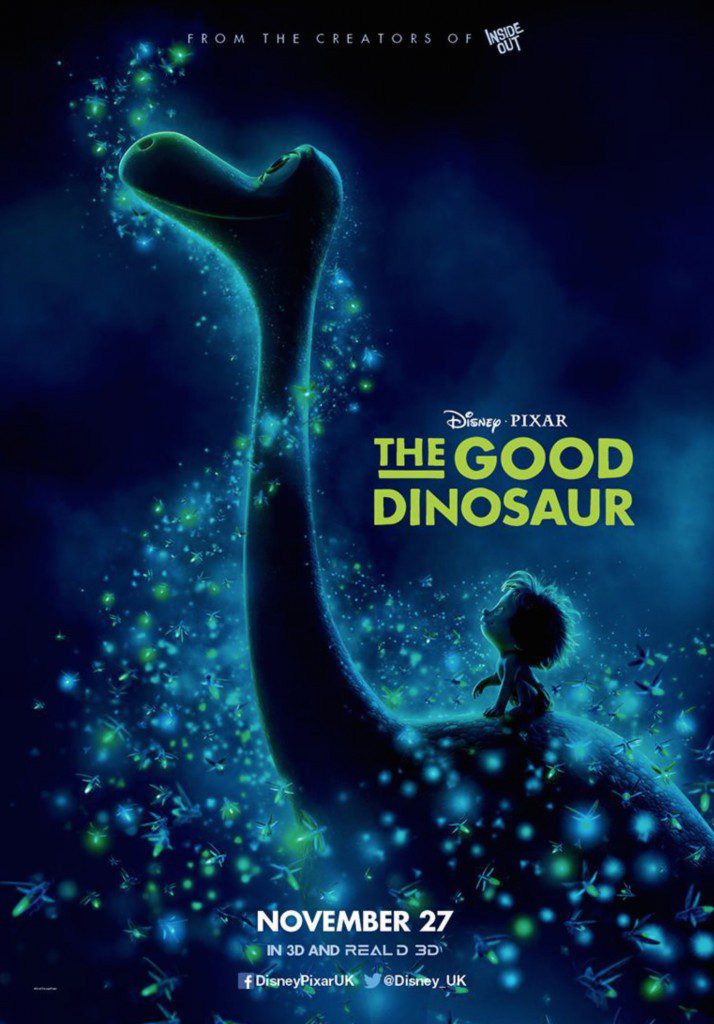 So what if the asteroid that forever changed life on Earth missed the planet completely, and giant dinosaurs never became extinct? Never fear, Disney/Pixar has an animated answer for you. Reaching back in history, just as humanoids were beginning to walk upright, dinosaurs, namely of the Apatosaurus species that roamed the North American northwest in the late Jurassic period, were talking, raising corn by creating furrows with their snozzles, chopping wood with their tails, storing food, living in dwellings, and teaching their young about hard work, family and character.

Poppa (Jeffrey Wright) and Momma (Frances McDormand) watch as Buck (Ryan Teeple) and Libby (Maleah Nipay-Padilla) hatch from their eggs. The last to hatch is Arlo (Raymond Ochoa), and he is also the smallest of the three. He struggles to keep up as Buck and Libby leave their “mark” on the farm’s silo when they accomplish something significant. To teach Arlo courage, which he greatly lacks, Poppa takes him on a wonderful journey to explore their world. Unfortunately, things turn sad when Poppa is washed away as a river comes roaring to life during a storm. He pushes Arlo out of the way just in time.

Arlo must make his way home alone along nature’s trail, populated by treacherous pterodactyls that seek out injured animals to devour after storms, a serpent, and a frightened advice-giving Styracosaurus that collects pets in his “horns” to give himself a sense of safety in camouflage. One day, Arlo sees a small creature in the brush. It turns out to be a humanoid boy, though Arlo doesn’t know this. The boy does not speak but he responds when Arlo calls him “Spot” (Jack Bright). They become a team and survive all kinds of perils on their way home, even though Spot doesn’t speak; he howls. Like a dog.

One of the most incongruous (you have to laugh) parts of the film is when Arlo and Spot run into the longhorn steer rancher T-Rex patriarch Butch (Sam Elliott) and his T-Rex kids Ramsey (Anna Paquin) and Nash (A.J. Buckley). Butch tells Arlo, “If you ain’t scared you ain’t alive.” Meanwhile Ramsey and Nash tumble with each other just like siblings do.

When I was invited to a press screening for “The Good Dinosaur,” I thought we’d see a really bad dinosaur opposite the good one, but this is not how the story is set up. This is a film about family, death, grieving, courage, character, kindness and friends. The contrast, or tension, is between the characters and nature itself as depicted in stunning, lifelike animation.

The voice actors, Sam Elliott, Anna Paquin, A. J. Buckley and Raymond Ochoa, all spoke about how honored and privileged they felt to be part of a Pixar production. Elliott, the veteran actor whose love for the Western genre is perfectly served here, said his mother would have been particularly proud of his participation because he plays a character who is a father with fine principles. Elliott’s voice resonates deeply around the campfire under the Wyoming skyscape.

First-time director (though a Pixar veteran) Peter Sohn, along with some other members of the production team, made a trip to Wyoming to experience the terrain and meet the people there. This is what they sought to reproduce in “The Good Dinosaur,” and they certainly got the “feel” of it all.

The magic in this film is truly the cinematography. I saw the film in regular 2D, but if you get a chance to see it in Imax or 3D, I think it would be even more beautiful. I kept looking to see if the nature scenes in the film were real life or animation; they are so good it’s hard to tell.

There are a few snags in the film that I almost hate to mention because members of this production and talent teams are just so very nice and truly want to inspire the audience.

But five people contributed to the story, and this amount of cooks in the scripters’ kitchen always spells chop in the narrative. The first director, Bob Peterson, was replaced in 2013 and the project had to be restarted, a hiccup if you will. It shows. The film is too long, with too many perils along the way for very small children. It keeps going and going. One mom I met after the screening said that her four-year-old was very distressed when Poppa died. The cuteness factor is for the very young, but the some of the themes trend to older kids and adults.

The film is being heavily merchandised. We were given a seven-page catalog list of accompanying merchandise, so if little kids get scared they can always hug an interactive plush Spot toy or Arlo stuffed animal, or parents can buy them a good dinosaur bike, scooter, umbrella, slippers. For grown-ups, there’s a big mug shaped like Arlo’s foot.

The film flips the boy-with-a-dog motif to a dinosaur-with-a-boy finding their way home. Some will think this is cute, I thought it was just OK. No one would ever use this film to teach human anatomy or science, right? (Spot squats to pee, and though he is non-verbal and walks on all fours, he demands his privacy.) I just don’t like making people, especially a child, portray animals. But we must suspend belief and carry on.

What does work well, however, is how Arlo and the boy communicate about family and losing their parents and their grief. Perhaps this is the first instance of art therapy we’ve seen in a Pixar film, but it’s smart and interesting and I think counselors and teachers may find this aspect of the film useful to refer to when working with grieving children. Curious that Pixar/Disney released two rather unique films this year and both deal explicitly with aspects of child psychology. (“Inside Out” is the other one.)

Disney and Pixar, alone or together, almost always tell stories where at least one parent dies, leaving an orphan. The adoption theme here seems caring and well handled (and no, I’m not going to clarify that because you have to see the movie.)

“The Good Dinosaur” opens in Thanksgiving Day, the 20th anniversary of the release of “Toy Story” that also had an adoption theme.

If you go to see “The Good Dinosaur” and think you are too old or big for an animated film, go to be delighted and awed by the beauty Pixar has created for this far-fetched tale. In the real world, this is where you go to take pictures and leave only footprints. Talking about care for the earth will come natural I think.

One last thing, there’s very little dialog in the film; it’s mostly told through visuals and sound. The composers, Mychael and Jeff Danna, bring in the sounds of nature and try to reflect the big sky of the world of the film. But the filmmakers really needed to commission a theme song to fill-out the adventure. But how will they ever beat “Let It Go?”

Please see ‘The Good Dinosaur’ is a visual treat with minimum dialogue at the National Catholic Reporter for more.

November 30, 2015 'Martin Sheen: Pilgrim on the Way' and People of God Series for stocking stuffers!
Recent Comments
0 | Leave a Comment
"Character matters. Yeah? What then? Look what sort of character is running to grab power ..."
ounbbl The Hopeful Relevance of “The American ..."
"lol wut"
Bloodeagle 1917 is a relentless video game-like ..."
">To each their own I supposeSo you admit you wasted your time writing what you ..."
GoldRushApple Doubt the Movie
">neither of the main characters seemed to care about the welfare of the black child ..."
GoldRushApple Doubt the Movie
Browse Our Archives
get the latest from
Entertainment
Sign up for our newsletter
POPULAR AT PATHEOS Entertainment
1