‘In the Heart of the Sea’ – epic story epic film 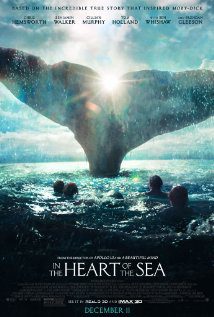 In 1850 the writer Herman Melville (Ben Wishaw) visits Thomas Nickerson (Brendan Gleeson) on Nantucket island off the coast of Massachusetts to discover the truth about The Essex, a whaling vessel that was reported shipwrecked thirty years before but rumors continue to circulate that this is not what happened; indeed, it’s destruction was beyond imagining. When Nickerson was young (Tom Holland) he had been a cabin boy on The Essex and he has never told anyone, not even his wife, the story that continues to haunt him. Melville is determined to find the truth.

Back in 1820 Owen Chase (Chris Helmsworth) is called to the whaling office on Nantucket to learn he will not be the captain of The Essex as promised but will be First Mate instead. George Pollard, Jr. (Benjamin Walker), is to be captain, but the crew is nervous and thinks him inexperienced and Chase is decidedly unhappy.

The ship and its crew soon leave port to harpoon sperm whales in the Atlantic and process their blubber for oil that they will store in barrels in the ship’s hold. The crew will be gone months. But after one successful kill, The Essex runs into months of bad luck and they catch nothing. When Chase and Pollard hear of whales off the Pacific coast of South America from other crews, they set sail in hope.

Then the unimaginable happens. The ship is attacked again and again by a gigantic sperm whale that seems determined to destroy the whalers. When The Essex burns, the whale attacks the smaller whaling boats carrying the crew. It almost seems that the huge whale has something personal against this crew and their pursuit of whales. The men barely escape, landing finally on a remote island.

Director Ron Howard tells this epic and thrilling story in an almost personal way, as if the challenge of recreating this historical maritime drama through film paralleled the ill-fated journey of The Essex itself. It seems he wanted to get every detail of life on a whaling ship correct and draw us into the whalers experience of fear, joy, desperation and hope – and being constantly wet and cold. Ron Howard is a masterful raconteur and I never looked once at my watch. The special effects are amazing, though I did go through a moment of cinematic irreverence caused by memories of “Jaws” when I saw the whale about to attack, thinking “They’re gonna need a bigger boat.”

But what does this story, based on Nathaniel Philbrick’s 2000 In the Heart of the Sea: The Tragedy of the Whaleship Essex mean? It’s true that Herman Melville published a fictional account of the story: Moby Dick or The Whale in 1851 and the book has become part of the canon of American literature and pervasive in popular entertainment beginning with the first film adaptation in 1930.

My take-away stems from reading Pope Francis encyclical “Laudato Si,” that opens our eyes, hearts and imagination to respect for all of creation. There is a moment in the film when Owen Chase, who has made killing the whale his personal mission, looks into the eye of the whale and they seem to read one another. This is the most perfect example of non-verbal communication in a film I’ve seen in a long time, and it makes sense. By the time Chase and Pollard are back in Nantucket telling their story to the owners of whaling ships (who go on to spin a different tale because they are afraid men will quit whaling), there is already talk of crude oil being used for fuel and the future need for whale blubber doubtful, as came to pass. The history of fuel and the impact of its extraction on the environment is one of the key themes in the film I think.

Nickerson tells Melville that the story of The Essex is the story of two men at odds with each other. But this is not entirely true; they eventually get along and Pollard reaches deep into himself to find the integrity to give a truthful account of the crew’s fate, a story that matches Chase’s. The script or editing does not follow this initial conflict through to the end. So this is really the story of man against nature and nature saying, “No.”

“In the Heart of the Sea” is a true adventure about the relentless search for primitive energy extracted using early technology. It is about the oceans, navigation and survival, morals and ethics, truth, and the sacrifices people make for their families. It is a magnificent, treacherous look into the past of the relationship between man and beast.

November 30, 2015
'Martin Sheen: Pilgrim on the Way' and People of God Series for stocking stuffers!
Next Post

December 7, 2015 'Ricki and the Flash' fails to sparkle
Recent Comments
0 | Leave a Comment
"When did this receive and Academy Award?"
Chrys Who Invented the “Jump Shot”? New ..."
"Character matters. Yeah? What then? Look what sort of character is running to grab power ..."
ounbbl The Hopeful Relevance of “The American ..."
"lol wut"
Bloodeagle 1917 is a relentless video game-like ..."
">To each their own I supposeSo you admit you wasted your time writing what you ..."
GoldRushApple Doubt the Movie
Browse Our Archives
get the latest from
Entertainment
Sign up for our newsletter
POPULAR AT PATHEOS Entertainment
1