“God Friended Me” is CBS’ latest foray into religion 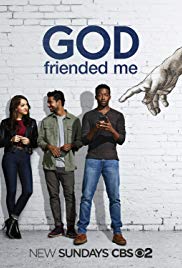 CBS is getting religion again with this new comedy about Miles (Brandon Michael Hall), an atheist with a podcast who is also a preacher’s kid.

After Miles asserts his joyful and confident atheism once again, God friends him on social media and continues to poke and annoy Miles until he accepts. This puts Miles in a place to make a dramatic difference in someone’s life and introduces him to Cara Bloom (Violet Beane), a journalist with writer’s block.

Let’s face it, it is hard to make television about God, but “God Friended Me” takes a laid-back approach with characters who follow their curiosity to discoveries that inspire but don’t overdo it. I enjoyed the pilot. It premieres Sept. 30.

October 15, 2018 "The Sentence" shows the dark side of mandatory sentencing
Recent Comments
0 | Leave a Comment
"lol wut"
Bloodeagle 1917 is a relentless video game-like ..."
">To each their own I supposeSo you admit you wasted your time writing what you ..."
GoldRushApple Doubt the Movie
">neither of the main characters seemed to care about the welfare of the black child ..."
GoldRushApple Doubt the Movie
"WTF?"
Richard B ‘The Curse of La Llorona’ gives ..."
Browse Our Archives
get the latest from
Entertainment
Sign up for our newsletter
POPULAR AT PATHEOS Entertainment
1