This is what a waste of money looks like: 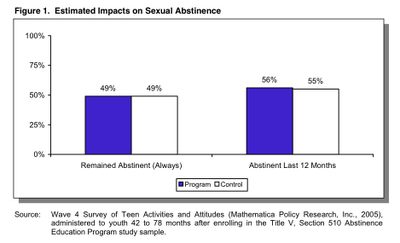 Findings indicate that youth in the program group were no more likely than control group youth to have abstained from sex and, among those who reported having had sex, they had similar numbers of sexual partners and had initiated sex at the same mean age.

According to this study, kids who went through the program were no more or less likely to do anything. Put another way, it would be impossible to tell, based on behavior, whether a student had been through this program or not.

The program seems to have had no effect. Zero. The kids might as well have been in study hall. The good news, such as it is, is that it doesn't seem to have had any of the feared negative effects, either:

Contrary to concerns raised by some critics of the Title V, Section 510 abstinence funding, however, program group youth were no more likely to have engaged in unprotected sex than control group youth. 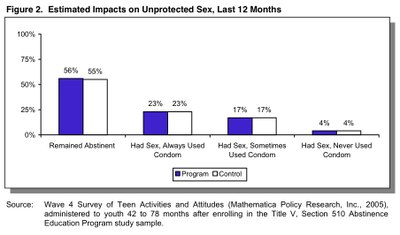 That's interesting. These kids didn't learn about safe sex in schools, but fortunately they learned about it somewhere — from parents, peers, MTV or myspace. Considering the dismal ineffectiveness of the Title V, Section 510 programs, I think it might be worthwhile trying to figure out where it was that these kids learned what they weren't being taught in school. If you're looking for effective programs to emulate, that might be a good place to start.

Look at those graphs above and imagine you're an executive with Coke or Pepsi or some other peddler of fizzy sugar water. Imagine that over the past 10 years you'd spent roughly $1 billion on an advertising campaign only to receive a report like this one, showing your ads have had precisely no effect on their intended audience. You would, of course, stop wasting your time and money on this expensive and useless project and find some other strategy. You'd be a fool if you didn't.

This is why critics of abstinence programs think this report is the last nail in the coffin of this approach:

â€œThis report should serve as the final verdict on the failure of the abstinence-only industry in this country,â€ said William Smith, vice president for public policy of the Sexuality Information and Education Council of the U.S. … â€œIt shows, once again, that these programs fail miserably in actually helping young people behave more responsibly when it comes to their sexuality.â€

Well, yes, it should serve as the final verdict, but it won't. Abstinence proponents aren't operating on the same rational basis as our hypothetical soda company. And, unlike a corporation investing in advertising, they're not spending their own money, so they're not terribly concerned if it's wasted.

This study may be conclusive, but its conclusions won't be accepted.

April 15, 2007 Comics, journalists & preachers
Recent Comments
128 Comments | Leave a Comment
"There is no confession of belief in Jesus or the divinity of Jesus in that ..."
Old Man Shadow Jan. 25 Flashback: A wee little ..."
"There's a story going around about a seven year old kid who died after getting ..."
Skybison Jan. 25 Flashback: A wee little ..."
"I think Goldwater held the libertarian position that government-enforced, de jure segregation was wrong but ..."
mattmcirvin Billy James won; Billy Graham lost
"The Nixon wing of conservatism went heavily for respectability politics, the Goldwater wing for a ..."
mattmcirvin Billy James won; Billy Graham lost
Browse Our Archives
get the latest updates from
slacktivist
and the Patheos
Progressive Christian
Channel
POPULAR AT PATHEOS Progressive Christian
1