Time’s Karen Tumulty provides the total vote counts, nationwide, for Super Tuesday. (I’m not sure how these account for caucuses.) Tumulty is focused on the remarkably close race between Hillary Clinton and Barack Obama, but that’s not what I found most striking.

Here are those same numbers tossed into Word’s graph-maker: 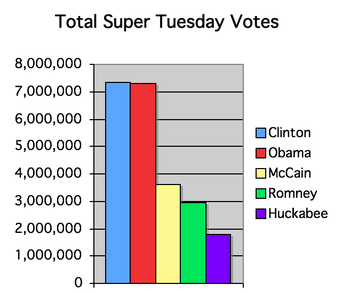 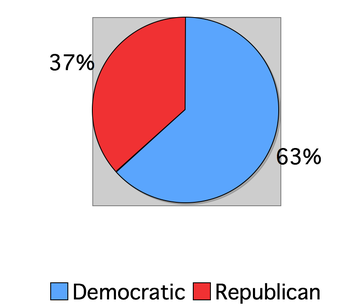 So Clinton and Obama both received more than twice as many votes as John McCain did yesterday. The overnight spin-chat on MSNBC somehow neglected to mention that. They were more concerned with whether or not the closely contested Democratic race would divide that party, hurting the eventual candidate down the line against McCain and the supposedly united GOP in the general election.

Yet while the Republican outcomes yesterday were more lopsided, the rancor between the factions on that side of the aisle seems much more fierce. The GOP establishment — including talk radio moguls Rush Limbaugh and James Dobson — really dislikes McCain. Wall Street, Club for Growth type Republicans hate Huckabee. The sense I’ve gotten from the Democratic side is that while voters may have real preferences for either Clinton or Obama, there wouldn’t be a lot of wailing or gnashing of teeth if the other one wound up winning the nomination.

Over at Hullabaloo, dday highlights data from a CNN exit poll that indicates my impression is mostly accurate: 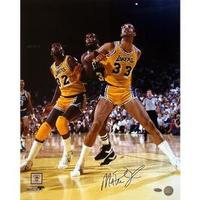 There’s no doubt Democrats are torn between Barack Obama and Hillary Clinton. But the early exit polls show they are not bitterly divided: 72 percent of Democrats said they would be satisfied if Clinton won the party’s nomination, while 71 percent say the same about Obama.

I’d like to see the same response to the Republican version of that question. What percentage of Republican voters would be satisfied with McCain? Or Huckabee? Or Romney? I’d guess that not only would the percentage be lower, but I’d guess the dissatisfaction in that race would be far more vigorous and vehement.

For myself, I’d be more than satisfied with either Obama or Clinton as my party’s nominee. I understand that Magic Johnson is supporting Hillary Clinton. Kareem Abdul Jabaar, meanwhile, is supporting Barack Obama.

That’s the choice: Magic or Kareem.

It’s an understandably tough call, but I’m not complaining about the options.