You may have already seen this story from the BBC, “Isolated tribe spotted in Brazil“:

One of South America’s few remaining uncontacted indigenous tribes has been spotted and photographed on the border between Brazil and Peru. 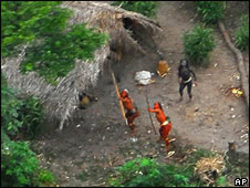 The Brazilian government says it took the images to prove the tribe exists and help protect its land.

More than half the world’s 100 uncontacted tribes live in Brazil or Peru, Survival International says.

Stephen Corry, the director of the group — which supports tribal people around the world — said such tribes would “soon be made extinct” if their land was not protected.

The BBC also has more photos in this fascinating slideshow.

Anthropologists and advocates will debate the best way to protect these Brazilians who have never heard of Brazil. Some will want to ensure that they remain independent and unmolested by the wider world. Others will want to make contact to study them (if they can find a way of doing so without exposing them to epidemic disease). The Bush administration is probably already drawing up plans for a military invasion to liberate these people.

But for a look at the deeper meaning of this story, there’s only one place to turn: Rapture Ready — “your prophecy resource for the End Times.” The confirmed existence of this tribe — and of the 100 or so other uncontacted peoples like them — is Big News for the pseudo-scholars of the “Bible prophecy” racket.

And this gospel of the kingdom will be preached in the whole world as a testimony to all nations, and then the end will come.

For premillennial dispensationalist prophecy types like Tim LaHaye and John Hagee, the meaning of that passage is very clear. They believe that “the end” cannot come until after every nation and tribe on the planet has heard the gospel. And they really, really want “the end” to come. They can’t wait for this world to be over with already.

This leads to the odd situation of PMDs supporting the preaching of the gospel to every tribe and every nation in order to speed the day in which every tribe and every nation is swept away in the apocalypse. That’s an oddly contradictory sort of motivation, but anyone who’s looked at PMDs’ ardent “support for Israel” will already be familiar with this dynamic. They are fiercely “pro-Israel,” because that’s where Megiddo is, and therefore where Armageddon will happen, and they can’t wait to see Armageddon when all the Jews get wiped out.

Both LaHaye and Hagee are fond of saying that “the end” could come before they reach the end of their sentence/interview/sermon. It could come, they say, at any second now. That claim would seem insupportable given that: A) they believe that “the end” cannot come until every tribe has heard the gospel preached; and B) many tribes, such as the people pictured above, have not yet heard any such preaching.

But don’t worry, LaHaye and Hagee believe they have this covered. They believe that after all the real, true Christians are snatched off the earth — which could happen at any moment — the RTC gospel will then be preached to every tribe and nation by an army of singing Jewish virgins.

No, really. This is what Tim LaHaye thinks when he looks at a picture like the one above: “Oops, looks like our missionaries missed a spot. Oh well, the 144,000 singing virgins will have to get to them after we’re outta here.”

I may have mentioned this before, but PMDs are nuts.

Anyway, reality is far more interesting than PMD delusion, and for a fascinating reality-based exploration of the meaning of the story and the photo above, check out this installment of “Talk of the Nation” from National Public Radio in which they discuss all this with National Geographic’s Scott Wallace. That interview also introduced me to the astonishing career of Sydney Possuelo, Brazil’s champion of its isolated indigenous peoples.

Progressive Christian
This mist that covers your eyes
slacktivist

Progressive Christian
Now I lay me down to sleep
slacktivist