(I wrote the following before watching Barack Obama’s convention speech, so there aren’t any specific references to that speech here but, wow, there really probably should be.)

Rick Perlstein recalls a famous anecdote about Adlai Stevenson and explains why it illustrates a dead end for Democrats:

Adlai Stevenson, the Democratic presidential candidate in 1952 and ’56, famously quipped when one of his supporters, overflowing with exuberance after one of his speeches, cried, “Governor Stevenson, you’ll have the vote of every thinking American!” Stevenson replied: “But I need a majority.”

Techically, a true thing to say. But politically, so very, very wrong. In wryly congratuling himself and his audience for comprising some sort of superior intellectual elect, he was calling everyone who didn’t like Adlai Stevenson an idiot. And no one likes to hear that they are an idiot. Especially if they are, in fact, an idiot.

Accusing your opponents and their supporters of being idiots is not an effective electoral strategy. Most candidates have figured that out — although, as Al Gore discovered in his debates with George W. Bush, it can be hard not to treat your opponent as an idiot when he’s playing the part with such enthusiasm.

The bigger problem for Democrats nowadays is that no matter how careful they are not to display a Stevensonian condescension, they’ll end up being accused of it anyway. Gore and Kerry were accused of “elitism” not because they acted like elitists, but because accusing Democrats of elitism is a standard tactic employed by Republican campaigns. The Democrats could nominate Archie Bunker or some Capra-esque Everyman and their nominee would still be accused of elitism. Whether or not the Democratic candidate treats voters as though they were unenlightened idiots in need of re-education, they will be accused of doing so. And, as Perlstein points out, if that accusation sticks they will lose. 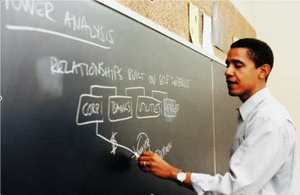 Related to this is what we could call the Smartest Guy in the Room dilemma. Nobody likes the Smartest Guy in the Room. Nobody likes to be lectured. Gore, God bless him, has always had a problem with this. He strikes a lot of people as a very smart college professor giving a lecture and that rubs them the wrong way. Even when they have to acknowledge that he really is a very smart guy. Even when they have to acknowledge that his lectures are, inconveniently, true and urgent and even necessary. They end up resenting him for being right rather than admiring him for it.

Which brings us to Barack Obama. He’s clearly a very smart man and he has actually worked as a bona fide college professor. Does this mean he’s doomed as a candidate to have his intelligence used against him?

We’ll get back to Barack Obama in a minute, but first let me tell you about Mrs. Mog.

Mrs. Mog was my favorite teacher in school. I had plenty of good teachers, many of whom probably knew their stuff better than Mrs. Mog did, but I still got more out of her classes than out of any of those others.

And that wasn’t just true for me, she was everybody’s favorite teacher. We all loved Mrs. Mog for one very simple reason: We knew that she loved us. As a result, she never had to waste class time on discipline or playing traffic cop. None of us wanted to disappoint her by causing trouble. And we all worked hard to learn the middle school Social Studies curriculum she taught us — the states and capitals, how a bill becomes a law, how Lenni Lenape longhouses were built — but none of that was the most important thing we learned in her class. The most important thing that Mrs. Mog taught us was that we could do anything.

Mrs. Mog believed that we were capable of being better, of being good, of being great. And because she believed it, she made us believe it too. She made us want to be better, good, great. We wanted to become the people she seemed to see when she looked at us, and thanks to her we believed we could.

If you’re very lucky, then maybe you had a teacher like that too. I hope you did.

The point here, of course, is that Mrs. Mog made all of us, each of us, feel like we were the Smartest Guys in the Room. Whether or not we deserved it, whether or not it was true, she made us believe that it could be true, which led us all to try to make it true — or, at least, to make it closer to true than it had been before. And she didn’t do this through shallow flattery — we’d have seen through that. She did this by challenging us and inspiring us to meet that challenge.

I’m guessing you see where I’m going with this.

It’s become fashionable — particularly among a certain kind of Stevensonian elite — to dismiss Obama’s oratory and rhetoric as, by definition, insubstantial. The implication, often explicit, is that his audiences are rubes, idiots spellbound by a lot of pretty talk. But it is precisely the substance, not the style, of Obama’s oratory that has been winning over his audiences. That substance is egalitarian, democratic, inclusive and aspirational — precisely the opposite of elitist or condescending.

At his best, in other words, Barack Obama doesn’t come across as a college professor lecturing voters, but as the kind of teacher who makes the class want to be better, to be good, to be great, and to believe that such a thing is possible.

Progressive Christian
Come with me and escape
slacktivist