According to a disheartening recent poll, 200 years after the birth of Charles Darwin, most Americans don't believe in evolution.

So that's about 60 percent of the country that doesn't "believe in" evolution. 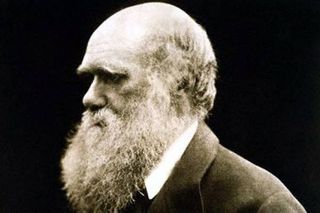 It's hard to know what that means, exactly, to "believe in" or "not believe in" evolution. It's like not believing in Missouri, or not believing in thermal conduction. Those two examples are a bit different from one another, but they both get at aspects of what this odd sort of disbelief entails.

"Not believing in Missouri" doesn't affect the Show-Me State one way or another. To say that you don't "believe in" Missouri is really to say that you deny it exists — that its existence is a fact you refuse to accept. That's delusion No. 1. Delusion No. 2 is a corollary to that refusal — the idea that your belief or disbelief somehow makes it so. These are delusions because Missouri does, in fact, exist, and because its existence is not conditional upon your "belief" in the reality or unreality of that fact. Both of these deluded notions, I think, are a part of what many of those respondents meant when they told the pollster that they "do not believe" in evolution.

It didn't help, of course, that Gallup framed the question with leading language about "the theory of Missouri."

On the other hand, if someone tells you that they "don't believe in" thermal conduction, it's likely that they're not so much saying they deny its existence as that they don't understand what you mean when you say "thermal conduction." For all their supposed disbelief, after all, they still avoid sitting on metal park benches in the winter. I suspect that something like that is the case with at least some of that 60 percent — that the more they can be led to understand this thing they don't believe in, the less they'll feel the need to disbelieve it.

But what it seems most of these respondents meant when they said they "do not believe in" evolution was that they believed in something else — some other "theory" they view as its incompatible opposite. As Gallup notes:

… The evidence is clear that even to this day, Americans' religious beliefs are a significant predictor of their attitudes toward Darwin's theory. Those who attend church most often are the least likely to believe in evolution, and most likely to say they do not believe in it.

Gallup says this finding "is perhaps dismaying to scientists who study and respect [Darwin's] work," but they fail to note that this is also deeply dismaying to anyone who studies or respects the book of Genesis of the 2,000 years of Christian teaching that these church-attenders are choosing to ignore, contradict and rewrite.

Dismaying isn't a strong enough word, actually. For anyone who studies or respects the Bible or Christian teaching, the results of this survey aren't just dismaying, they're enraging. American Christians are enthusiastically rewriting the book of Genesis and, yes, that kind of pisses me off. They are claiming that it means what it does not say and that it says what it does not mean — that it means some new thing and no longer means what it has long been understood to mean. They are, among other things, claiming that the Pentateuch contradicts itself, that it requires them "to love the Lord your God without your mind."

It doesn't help that those conducting this rewriting and reinterpreting of the book of Genesis insist that the rest of us refer to them as "conservative" Christians. Their insistence does not make it so any more than their denial of evolution or Missouri or thermal conduction would make that so. Radical innovation coupled with a rejection of the prior understanding is not a "conservative" approach. That word does not mean what they think it means.

I want to get at this a bit more in a follow-up post, but here I'm mainly just venting. While I do that, let me also point out that there is a third category of people who ought to find this poll "dismaying." In addition to those who study and respect science and those who study and respect the Bible, there is also anyone who studies or respects — who tells or hears — stories.

February 17, 2009 Well put
Recent Comments
246 Comments | Leave a Comment
"I don't care about their heart, I care about their actions. And force works pretty ..."
Antigone10 ‘Our American Cousin’
"I would think that in terms of determining whether or not a fetus is a ..."
Christopher Bacon ‘Claiming the moral high ground’
"Saruman absolutely is. If "The Cleansing of the Shire" doesn't convince you of that, nothing ..."
Christopher Bacon ‘Claiming the moral high ground’
"The previous one isn't over yet."
Hawker40 ‘Our American Cousin’
Browse Our Archives
get the latest from
slacktivist
Sign up for our newsletter
POPULAR AT PATHEOS Progressive Christian
1