Halloween is, among other things, an excuse for the Slacktivixen and my daughters to dress the dog up in costumes. 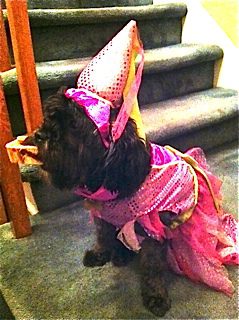 Willow is a patient dog, and can be bribed into complying with almost anything in exchange for a treat.

But Halloween is also, according to Herbert Hoover Fan Club President Amity Shlaes, a Pagan ritual promoting “necromancy” and the undermining of monotheistic hegemony. Jason Pitzl-Waters responds to Shlaes’ complaint that the holiday is a threat to christianamerica.

“Halloween isn’t secular. It is pagan,” Shlaes writes, assuming her readers will all share her unspoken assumption that this is a condemnation.

If she had stopped to consider that assumption — the assumption that the vast majority of people reading what she’s writing there share her general perspective on the undesirability of pagan influence in America — then she might have realized that it contradicts the claim of her complaint. If one assumes that one can simply say “Halloween … is pagan” and have everyone reading gasp along at the horror of that, then one cannot simultaneously argue that this pagan influence is widespread and becoming dominant among that same readership.

I suppose the best way to get knee-jerk social conservatives to stop whining about Halloween would be to point out to them that all this free candy undermines Michelle Obama’s campaign against childhood obesity. By the conservative principle of reflexive opposition to all things Obama, that would probably lead to columns celebrating the true spirit of Halloween.

Progressive Christian
Where the miles are marked in blood and...
slacktivist

Truth Matters
Truth matters. We say so. But we lie every day and some...
view all Progressive Christian blogs
What Are Your Thoughts?leave a comment
Copyright 2008-2021, Patheos. All rights reserved.