2. If your actions are such that you perform them in the dark of night, avoiding cameras and witnesses or even employing the threat of force to ensure secrecy, then it is obvious to all — to you and to everyone else — that your actions are not lawful, not honorable and not just.

3. The only exception I can think of to the previous statement is the tactical secrecy sometimes necessary for a military assault against a powerful enemy. 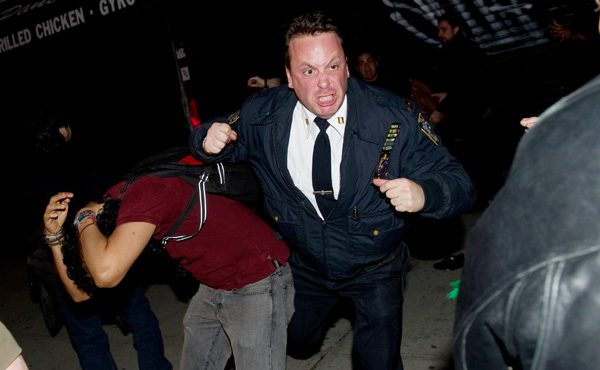 6. One might argue that the police officer in this photograph is “serving,” but that who or what he is serving is something other than the public and the public interest. Charlie Pierce offers such an argument:

Your right to peaceably assemble for the redress of grievances, and how you may do it, and what you may say, will be defined by the police power of the state, backed by its political establishment and the business elite. They will define “acceptable” forms of public protest, even (and especially) public protest against them. …

Late last night, the New York Police Department, apparently decked out for a confrontation with the Decepticons, cleared Zuccotti Park of the campers who had occupied it for nearly three months. It was, as all of these things have been, a fully militarized operation, launched with a maximum of surprise by armored tactical police who even brought a helicopter, in case they needed air support.

7. The police officer in the photograph above is very angry. I believe he is angry because he was ordered to do what he is doing in the dark of night, hidden from the press or other witnesses, and thus he knows that what he was ordered to do is something other than lawful, honorable and just. And I believe that he is angry because, realizing that, he chose to skulk about in the dark following those orders anyway, and thus he has just learned something unpleasant about himself.

November 15, 2011 Occupy the foreclosure crisis
Recent Comments
178 Comments | Leave a Comment
Browse Our Archives
get the latest from
slacktivist
Sign up for our newsletter
POPULAR AT PATHEOS Progressive Christian
1