So of course I’ll take that as an excuse to re-read one of my favorite passages in American literature, from Chapter 31 of Huckleberry Finn, wherein Huck aims to misbehave.

I’m sticking with the original language here, which is offensive and vile, and the only language Huck would have known, even if he had gone to the Sunday school or listened to Miss Watson.

I about made up my mind to pray; and see if I couldn’t try to quit being the kind of a boy I was, and be better. So I kneeled down. But the words wouldn’t come. Why wouldn’t they? It warn’t no use to try and hide it from Him. Nor from me, neither. I knowed very well why they wouldn’t come. It was because my heart warn’t right; it was because I warn’t square; it was because I was playing double. I was letting on to give up sin, but away inside of me I was holding on to the biggest one of all. I was trying to make my mouth say I would do the right thing and the clean thing, and go and write to that nigger’s owner and tell where he was; but deep down in me I knowed it was a lie — and He knowed it. You can’t pray a lie — I found that out. 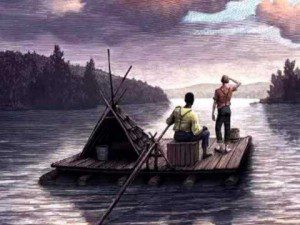 Miss Watson your runaway nigger Jim is down here two mile below Pikesville and Mr. Phelps has got him and he will give him up for the reward if you send. HUCK FINN