Chuck Colson’s latest column — “Killing Your Neighbor’s Cow — Income Inequality” is not the work of an honest man.

If it were, then the only way to make any sense of it would be as a confession — as Chuck Colson calling himself a soak-the-rich socialist firmly in the grasp of the deadly sin of envy.

That’s not what Colson says, at first glance. At first glance it seems he’s just accusing a bunch of other people of being a bunch of soak-the-rich socialists driven by the sin of envy. (It’s not entirely clear who — he seems to mean the 99-percent movement and President Obama, and probably the rest of Obama’s party.) 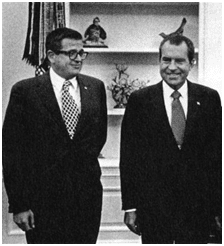 That’s kind of a mean thing to say about other people. And, generally speaking, it’s not considered kosher to attribute malicious motives like envy unless you have evidence for that claim. Colson offers no evidence. He just asserts it — he just presumes they’re envious and peasant-like. You’d think that kind of baseless nastiness might get him in trouble with his editors at Christianity Today, or at the Christian Post, or with any of the hundreds of Christian radio stations who carry his commentaries. But it won’t.

Now, pay attention, because I am about to work my way to the conclusion that Chuck Colson is operating from malicious motives. This will not be, like Colson’s slur, an unsupported assertion — a presumption of guilt. It will be, rather, a conclusion — the only logical conclusion we can draw — based on evidence.

What that evidence tells us is that Colson knows his nastiness isn’t true. He doesn’t believe what he’s saying about these vague others whom he’s accusing of dirty, nasty, peasant-ish envy.

And we know that he knows his own history.

“Envy,” Colson’s column says, is what motivates calls for higher taxes on the wealthiest 1 percent. The top marginal income-tax rate in America, right now, is 35 percent. Anyone who thinks it ought to be even slightly higher, Colson argues, is calling for a “soak-the-rich” policy and can only be motivated by the ugly, ignoble sin of envy.

But here’s where Colson’s own history comes in.

Chuck Colson served as special counsel to President Richard M. Nixon from 1969 through March of 1973. He was an essential part of the innermost circles of the Nixon administration.

During all his years working in the White House, the top marginal income tax rate was never below 70 percent.

During every day that he worked in the White House as one of the most powerful men in the executive branch, the wealthiest Americans were charged double the rate of income tax that they pay today.

Again, the top marginal income-tax rate today is half of what it was during Colson’s service at the top levels of the Nixon administration. And the capital gains tax today — the tax that matters more to the wealthiest Americans who make money from money rather than from work — is even lower. The capital gains tax rate is just 15 percent, which is why Warren Buffett pays a lower rate than his secretary does.

When Chuck Colson was working alongside the president, revenue as share of GDP was 17.6 percent. Today it is 14.4 percent — historically low, the lowest it has been since 1950.

So according to the standard set by his column, Chuck Colson and the rest of the Nixon administration were a bunch of soak-the-rich radical redistributionists driven by socialist envy.

He can’t believe it. He knows better because he knows his own history. Colson knows what the top rate was when he worked in the White House and he knows what it is now. He knows it’s ludicrous for anyone to suggest that any rate higher than half the top rate during the Nixon administration  would constitute “soaking the rich.”

He knows, in other words, that what he is saying in this column is not true. He knows this.

Chuck Colson knows that the witness he is bearing in this column is false.