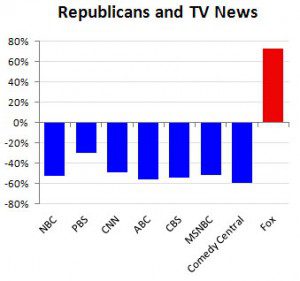 Kevin Drum highlights an extreme, but unsurprising, result from a recent Public Policy Polling survey on trust and TV news:

Well, you say, maybe this just means that trust in the media is really low these days? Nope. Democrats and Independents may not trust Fox, but they do trust everyone else. The percentages vary, with more skepticism toward some outlets than others, but what non-Republicans don’t do is simply dismiss television news en masse as a bunch of lying corporate shills.

Steve Benen quotes the pollster’s analysis — “Democrats trust everything but Fox. Republicans don’t trust anything but Fox.” — and notes, correctly, that this is “epistemic closure.”

That’s by design. For Fox News, epistemic closure is a feature, not a bug.

This poll is evidence that Fox’s central message has reached its intended audience. That message is: “Trust no one except us.” Not the other networks. Not the newspapers. Not science or government or most churches. Not books or libraries or magazines. Not artists, teachers, universities or experts. Not your own five senses. Not reality. Only trust Fox News — everyone else is lying to you.

It’s not all that different from the way abusive husbands try to cut off their wives from all friends, acquaintances and co-workers to create total dependence and control that they can exploit.

If you can’t muster the honesty and accuracy that would earn your audience’s trust, then the next best thing, I suppose, is to convince them to distrust everyone and everything else.

[Edit: Initial version of this post didn’t make it clear that the second paragraph quoted from Kevin Drum was part of that quote.]