When the bias of our blinders changes the Bible

I think I’ve figured out who that little silhouette in Disqus’ not-so-neutral default avatar is.

Junias is a character in some translations of the Bible.

More specifically, he’s a character invented by translators and inserted into the Bible. He’s a made-up person with a made-up name.

Here’s Junias in the English-language American Standard Version of the Bible, in Romans 16:7 :

Salute Andronicus and Junias, my kinsmen, and my fellow-prisoners, who are of note among the apostles, who also have been in Christ before me.

None of the scholars and translators who prepared these English editions of the Bible hesitated to include Junias in that verse despite the fact that he never existed. That even his name, apparently, never existed.

But they all inserted the non-existent Junias into that verse in Romans because they preferred that invention to what Paul actually wrote, which was Junia. That was a real name and Paul referred to her as a real person who really was a real apostle.

Here, from What Paul Meant, is Garry Wills summarizing male Christians’ desperate effort to turn Junia into a dude:

In the long list of people Paul greets at the end of his letter to the Romans, he gives special notice to the husband and wife evangelical team of Andronicus and Junia (Rom. 16:6-7), whom he calls “my kindred” (suggeneis mou). … The supreme accolade comes when he calls them “outstanding among the emissaries.”

Though there are no offices in the early gatherings, only functions, and though Paul stresses the equal dignity of all gifts of the Spirit, he does list emissaries (apostoloi) first in the “big three” charisms — emissaries, prophets, and teachers (1 Cor. 12:28). For Junia to be included not only among the emissaries but among the outstanding (episemoi) ones was a high honor, as John Chrysostom recognized in his commentary on Romans: “How great this woman’s love of wisdom (philosophia) must have been, to merit her inclusion among the apostles.” She and her husband had a liturgy devoted to them as married saints and apostles in the Byzantine church. Most early commentators and fathers of the church, including Origen and Rufinus, celebrated her extraordinary eminence.

But sometime in the Middle Ages, apparently before the ninth century, it was decided that a woman apostle was unthinkable. This offended the male monopoly of church offices and honors that had grown up by that time, so Junia had to be erased from history. It took only a little smudging to do this. Paul uses her Greek name, Iounia, in the accusative case, Iounian. A mere change in accent markings (a circumflex over the last vowel) would make it the accusative form of a hypothetical male name, Iounias. But there is one problem here. “Junias” is only a hypothetical name — it never occurs in all the ancient literature and inscriptions — whereas Iounia is a common name, occurring hundreds of times. Besides, the other teams Paul mentions in Romans 16 are male-female ones — Aquila and Prisca, Philologus and Julia, Nereus and Olympas — with the exception of a female-female one (Tryphaena and Tryphosa, probably sister Sisters). We know from Paul’s reference to Peter and the Lord’s brothers, who traveled with their wives, that male-female evangelical teams were common (1 Cor. 9:5). Only the most Soviet-style rewriting of history could declare Junia a nonperson and invent a new team, Andronicus and philologically implausible Junias.

Scot McKnight has much more to say about Junia and that “Soviet-style rewriting of history.” Junia — and the centuries-long effort to silence her — is the centerpiece of his lively, pithy, deservedly angry ebook Junia Is Not Alone. 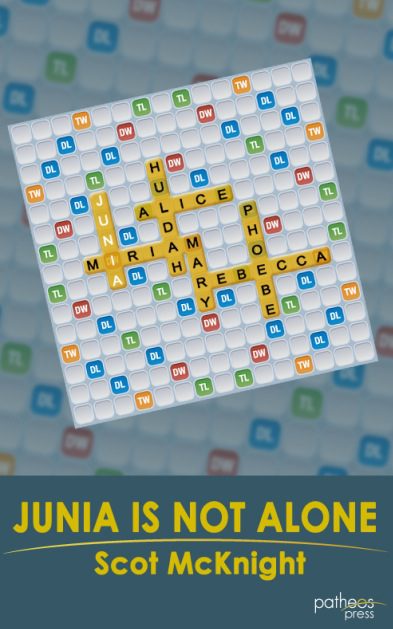 There was a first-century relative of the apostle Paul named Junia; she entered into Christ before Paul did; and this Junia was an apostle. Which means (because this is what apostles did) she was in essence a Christ-experiencing, Christ-representing, church-establishing, probably miracle-working, missionizing woman who preached the gospel and taught the church.

Why? Because Junia was not alone.

McKnight goes on to give example after example from the Bible and from history of women who were “outstanding among the apostles” and among the prophets, but whose voices are silenced and histories erased by the same male-dominated leadership that tried to replace Paul’s relative Junia with an imaginary male given an imaginary name.

McKnight’s book is bound to be deemed “controversial” — and thereby controlled and dismissed — by many male leaders in the American church. That’s how American evangelicals warn one another not to listen to someone telling uncomfortable truths — they label them “controversial.”

Remarkably, these same male leaders see nothing “controversial” about the centuries-long effort to change the words of the Bible to erase its reference to this female apostle. These men invariably are the sort of people who will tell you that the Bible is sacred, inerrant, holy, unquestionable and infallible. They will insist that they have a “high view” of scripture (higher than yours, certainly, if you dare to disagree with them). They will tell you that the Bible must be read literally and that this is how they read it.

But given a choice between the sacredness of their sacred text and having to admit the full equality of women and men, they’re perfectly willing and eager to change the text — to distort, alter, edit, twist, slice, chop and subvert it. You’d need an unabridged thesaurus to come up with all the manipulations and indignities they’d be willing to inflict on that text before they’d be willing to accept what this verse in Romans tells us about women’s leadership.

January 27, 2012
One for normal people and another one for women
Next Post