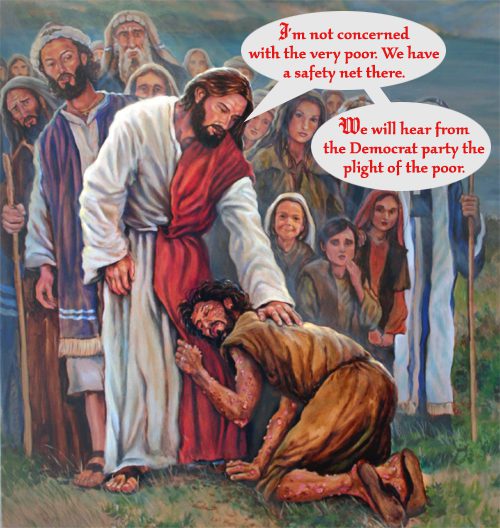 The formula is as jarringly effective as it is simple: Take verbatim quotes from public figures in politics and religion and place them in the mouth of Jesus of Nazareth.

The example here shows how this works. The quote is from Republican presidential candidate Mitt Romney. “I’m not concerned with the very poor,” Romney said this morning on CNN.

That’s appalling. I didn’t need any help to understand that much. But seeing those words in the context of this earnest, devotional picture of Jesus Christ reminds me of just how utterly, abysmally outrageous Romney’s statement is.

The word “antichrist,” where it actually appears in the Bible, doesn’t have anything to do with the Beast of Revelation or the fantasies of End Times “prophecies.” It has to do with this. Precisely this.

A very generous reading of Romney’s remark would be that what he meant was that “the very poor” will be helped by America’s social safety net. “We have a safety net there,” Romney said. “If it needs repair, I’ll fix it.”

But that’s not true. Or else his other campaign pledges are not true. “I’ll fix it” directly contradicts what Mitt Romney has been saying for months he plans to do to the safety net for the very poor. As Matt Yglesias put it, “Mitt Romney praises safety net he wants to shred.”

Jared Bernstein looks closely at what Mitt Romney has pledged to do to that safety net and thinks it means we should be very concerned about the very poor in a Romney administration:

Though Gov Romney recognized that “…we have food stamps, we have Medicaid, we have housing vouchers…” he neglected to make the following four points:

1) his budget slashes, and I mean SLASHES, domestic spending outside of defense.

2) he’s endorsed Rep Paul Ryan’s budget (now the House Republican Budget) which gets two-thirds of its $4.5 trillion in cuts from low-income programs (and uses the cuts to pay for tax cuts for the wealthy).

3) the Gov’s own tax plan actually raises taxes on those in the bottom fifth of the income scale (by $160 per year; by getting rid of a refundable credit for poor kids and cutting the EITC relative to current policy) — while cutting taxes for the very richest households by about $460K/year.

4) he’s said he wants to block grant these low income safety net programs – i.e., instead of the federal program, states run it based on an annual grant, a fixed amount that does not go up or down based on need – and that’s a great way to rip some big holes in the safety net.

And as that picture above from Tea Party Jesus reminds us, it’s the exact opposite of what Jesus said. It is opposed to Jesus.

Tomorrow morning, at the Hilton Washington International Ballroom in Washington, many of the most powerful people in the world will gather for the 60th annual National Prayer Breakfast. Attendance at and participation in this annual ritual is politically necessary for many government figures — a defensive measure required to avoid the demonization that would ensue if they dared to be absent. But many of the very wealthy, very powerful people attending are enthusiastic about the event.

And those who tend to be most enthusiastic about it tend also to be those most opposed to Jesus. The National Prayer Breakfast is a celebration of power and a celebration of the powerful. It is organized by a group dedicated to celebrating power — The Family. As Jeff Sharlet describes it:

The Family’s only publicized gathering is the National Prayer Breakfast, which it established in 1953 and which, with congressional sponsorship, it continues to organize every February in Washington, D.C. Each year 3,000 dignitaries, representing scores of nations, pay $425 each to attend. Steadfastly ecumenical, too bland most years to merit much press, the breakfast is regarded by the Family as merely a tool in a larger purpose: to recruit the powerful attendees into smaller, more frequent prayer meetings, where they can “meet Jesus man to man.”

And the “Jesus” those recruits are going to meet in those groups is the “Jesus” of the powerful, the blasphemous Jesus of power who isn’t concerned about the very poor.

Which is why I’m very pleased to read about The People’s Prayer Breakfast.

What does it mean to be a Christian when organizations such as The Family create a Jesus that does not hear the prayers of the poor? An organization that prays to the powerful in place of God? That participates in the global crucifixion of the poor by turning Jesus’ cross into a social ladder for politicians to climb upwards, past the broken body of Christ? To cultivate relationships with dictators?

To cultivate the most powerful for political influence, to create an elite society for the elite, is that listening to the prayers of the people?

This is not the way that Christians pray politically. If we are to take one political message from the entirety of the Scriptures it is that God hears the prayers of the poor, the downtrodden, and the oppressed, and acts through the narrative of history both for the daily bread of the poor and to make right their conditions of oppression. And if we ourselves do not listen, we face the judgement of a God who does hear those prayers.

Since today is the feast day of St. Brigid, let me commend a prayer of hers that might be said before the meal at the People’s Prayer Breakfast: