Rick Warren: Feeding the hungry robs them of ‘dignity’

So the Rev. Rick Warren was on TV. It didn’t go well. 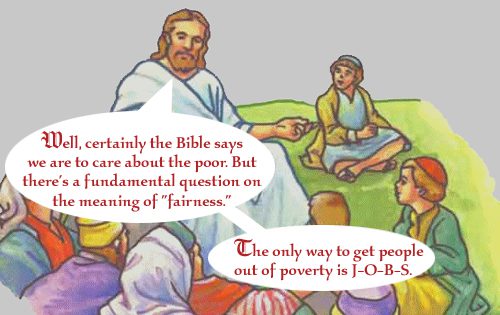 Warren, who was interviewd by Jake Tapper on ABC’s This Week, spent much of his time attempting to reconcile right-wing hostility to the social safety net with his Christian faith — an effort that earned him the Tea Party Jesus treatment borrowed here.

Actually, I’m probably overstating things to say that Warren tried to reconcile these two irreconcilable things. Really what he did was state a bunch of anti-antipoverty conservative talking points and then presume that, because they were being repeated by him, Rick Warren, Man o’ the Cloth, that somehow baptized them into Christian dogma. Or something.

Others have done a fine job chewing on and choking over that painfully embarrassing aspect of Warren’s TV appearance (made more embarrassing by the fact that Warren didn’t seem to realize how much of an embarrassment he was being) so I’ll just link to their comments:

While I might not be an expert in the Bible, I’ve read enough to know that Jesus sure didn’t seem to think that helping the poor robbed them of dignity. Can someone help me out here? What part of the gospels do you think Warren is referring to?

Ed Kilgore: “Where Do the Gospels Endorse Capitalism?”

It does take a lot of self-deception to read the Bible regularly and come away not only believing but preaching that Ayn Rand was basically right, except for her atheism. But it seems a remarkable number of American religious leaders are up to the task.

Blue Texan: “Rick Warren: ‘I Do Not Believe in Wealth Redistribution’”

Since Warren is against “subsidizing people” — I say we start taxing his ministry like any other business. Also, I don’t ever remember the part in the Bible where Jesus fretted about “dependency” when he instructed his followers to give everything they had to the poor, do you? Why would a supposed follower of Jesus say such a thing?

Warren seems to want Americans to believe our economy would be healthier if our government invested less. Indeed, the pastor’s argument seems to be that the Great Recession — partly the result of lax regulations and poor government oversight — would have been better if the public sector left more American families to fend for themselves. This is backwards …

Warren says in the Tapper interview that his church helps parishioners with job training and other employment services. Wonderful. But his church doesn’t help the whole damn country. The federal government does — or it tries, with less and less money.

Go against your Republican instincts, Rick, and grab the airtime so many media outlets are willing to give you to demand full restoration — or, for that matter, expansion — of this job assistance funding. Do it, and I’ll write your church a nice check.

Basically, Warren spoke as a Christian pastor on the subject of the American economy and managed to get all four parts of that (the Christian, the pastoral, the American, the economic) horribly wrong. That’s impressive.

But then, to be fair, he got all four of those things wrong in the same way and for the same reason. So really it was just the one underlying mistake — a callousness bred from utter ignorance about the reality of life for the “dependent” poor. (The same group he previously mocked as parasites.)

April 10, 2012 Rick Warren: An ignorant claim, a dishonest claim, and a tribal claim
Recent Comments
58 Comments | Leave a Comment
Browse Our Archives
get the latest from
slacktivist
Sign up for our newsletter
POPULAR AT PATHEOS Progressive Christian
1