How about a Bread for the World chapter at Rick Warren’s church?

How about a Bread for the World chapter at Rick Warren’s church? April 17, 2012 Fred Clark

So the simple idea here is to try to get a Bread for the World chapter revved up at Saddleback Church, the Southern California mega-church led by Rick Warren.

This would be a Good Thing. It’s something that ought to happen. It would, I think, be a big help for Saddleback, its people and its pastor. And it could be a big boost for Bread and for the hungry people it represents.

Bread for the World is an ecumenical, nonpartisan Christian lobby for the hungry. That’s all they do — speak on behalf of the hungry. That intense focus makes them far more effective at what they do than you might expect from such a lean, modest operation.

Bread isn’t what you probably imagine when you hear the word “lobbyists.” They’re not glitzy or glossy. They’re not big on schmoozing, fêteing and hobnobbing. They keep their heads down and their eyes on the ball, and whenever a bill or a budget affects the hungry, they go to work to make sure that the concerns of the hungry are not forgotten in the debate. They do their homework and they bring the data, backed up with the kind of resolve that only comes from standing up on behalf of someone else.

Bread for the World’s biggest weapon is genuine grassroots support. When they get involved, lawmakers get letters — enough letters that they have to listen and they have to respond.

Bread organizes what they call an “offering of letters” through local congregations. A bunch of people get together after church and write polite, informed, firm letters in defense of funding for WIC or for international development or for whatever the specific current issue at hand may be. Before long, their members of Congress are sitting at their desks looking at dozens of such letters, all from constituents in their districts — from Catholics, Lutherans, Methodists, Episcopalians, Baptists and members of the local Calvary Deliverance Bible Chapel. That’s effective.

In recent weeks, Bread has been fighting to defend SNAP, the Supplemental Nutrition Assistance Program, better known as food stamps. 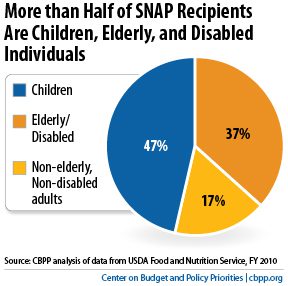 “SNAP Helps Stuggling Families Put Food on the Table,” the Center on Budget and Policy Priorities reports, with way more supporting data than anyone could possibly require. It’s an efficient, effective program providing vital help to families that desperately need it. Most of this help goes to children and to the disabled and the elderly. Most of the rest of it goes to people who are caring for children or for the disabled and the elderly.

Because it’s so efficient, effective and necessary, SNAP has enjoyed broad bipartisan support for most of the past 40 years. The more anyone understands the reality of the program and the reality of the people it serves, the more they tend to support it and defend it. The slurs and mythologies of its opponents just don’t stand up to the facts of the matter. Talk of “lazy welfare queens” seems repulsively ignorant once you realize the genius for home economics it takes to feed your children on the modest budget food stamps provides. Condescending talk of “dependence” just seems perverse once you realize it’s directed at children, the disabled and the elderly.

I’ve been a bit harsh lately in criticizing Rick Warren for promoting and repeating those ugly lies about the poor. (For a more patient take from someone closer to Warren theologically, see Morgan Guyton’s recent series: “Considering Rick Warren’s Economic Principles,” “‘The land is Mine,’ the importance of Leviticus 25:23” and “‘Government handouts’ that ‘create dependency.’“) It’s unlikely anything I’ve ever written to or about the man has even appeared as a blip on his radar, and in any case my evident anger and irritation with his nonsense would probably make him unlikely to listen to me.

But Rick Warren desperately needs someone to explain to him the cruelty of the ignorance he’s embracing when it comes to things like SNAP and other irreplaceable, essential assistance to the poor. He seems determined not to learn that truth. As Upton Sinclair said, “It is difficult to get a man to understand something, when his salary depends upon his not understanding it.”

Yett I think there’s a chance Warren might be receptive to learning the truth and to unlearning the lies if the message were coming to him from members of his own flock.

Imagine that one or more of the small groups at Saddleback Church were to join Bread for the World, joining their voices with those of other Christians throughout the U.S. in support of the hungry. They could share Bread’s materials with others at Saddleback, using their excellent resources to explain the simple, clear facts of the matter. And they could try to meet with their senior pastor to share those materials with him.

Would he listen? I don’t know. But it seems worth a shot.