Here’s the thing we need to always remember in the discussion of complementarian theology: women cannot not take such a discussion personally. It affects everything about how we are to behave, how we see ourselves, how we interact in our relationships, how we manage our careers, our children, and our lives. Even for single women, I have to continue to fight the perception that I am “outside of God’s will” by delaying marriage and children, perhaps refusing them altogether. If complementarians are right, my world falls apart.

How can I not take that personally?

And this is what is so often missing in the discussion of these competing theologies: the human factor.

For men, it’s very easy to forget that this complementarian theology affects women much more so than it does them. …

For me, the discussion can never be abstract. The potential for abuse is far too real and far too ripe for me to see the debate as a mere “fun discussion between friends.”

Because for me, it’s not just for funsies. It never will be. It is too real, and too personal for me to discuss it “for fun.”

Mercedes Ruehl earned a well-deserved Academy Award for her work in The Fisher King. 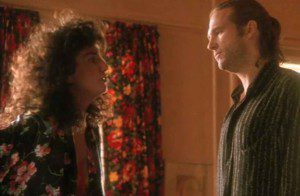 One of her best scenes in that movie was the scene where Jeff Bridges’ character, Jack, tells her he’s leaving. She breaks down, sobbing, and he starts to comfort her. Then she pulls herself away from him.

“No!” she says. “You don’t get to be nice! I’m not gonna play some stupid game with you so you can walk out that door feeling good about yourself. …”

I thought of Ruehl’s performance, and of Dianna’s post, when I read this self-serving attempt to be the “nice” bigot by Halee Gray Scott at Christianity Today’s her•meneutics blog, “I Am Not Charles Worley: The Plea of a Christian Who Opposes Gay Marriage.”

Scott wants you to understand that she’s not at all like the infamous homophobic preacher Worley. She’s totally different.

And Scott has had it up to here with people not recognizing the extreme importance of that distinction:

I am not Charles Worley, and I’m tired of others, especially fellow Christians, assuming that because I’m opposed to gay marriage that I’m hateful like him. It’s time to extend a hermeneutic of grace to each other — especially to fellow Christians who still do not favor gay marriage and believe that homosexuality is not God’s intent for human sexuality. …

Scott shares Worley’s hateful goals, but not his hateful sentiments, so how dare anyone compare them?

Note also that Scott hasn’t quite thought through what she’s arguing here. She says she opposes the civil right of same-sex marriage because her religious beliefs teach that “Homosexuality is not God’s intent for human sexuality.”

OK. But Scott doesn’t believe that, for example, Mormonism is “God’s intent for human spirituality,” and yet she’s not arguing that Mormonism should be illegal. So why is homosexuality different?

Scott can’t say. She seems not to have thought about it. But you mustn’t assume it’s because she’s some kind of hater. That sort of assumption — lumping her in with people like Charles Worley just because she wants the same legal outcome as they do — is hurtful. It wounds her feelings. Being compared to people like that is not nice.

And people should be nice to her, just as she’s being so nice to all the LGBT citizens whose legal equality she wants to nicely deny.

“I’m not asking for anyone to approve or accept my views,” Scott writes, magnanimously.

And it’s true. She doesn’t want anyone else to approve or accept her religious perspective. All she asks is that they allow her to write it into law.

Really, is that so much to ask?

Can’t we just agree to disagree respectfully? It seems churlish of me not to agree to this.

After all, Scott is willing to treat me nicely and to respect my right to believe that she should stop beating that old woman with a crowbar. So shouldn’t I reciprocate by treating her nicely and respecting her right to continue doing so?

That’s only fair. Or at least, it’s perfectly fair in Scott’s little world — a world in which the old woman being beaten doesn’t even register as a participant in the discussion. She’s invisible and unimportant. She doesn’t count.

Here, again, is Scott, in her own words:

The truth is, most of those who share my view are not like Pastor Worley, and most of those who support gay marriage aren’t in favor of some drunken Woodstock free-for-all. Most of us are in the silent middle, and each believes that our view is loving, but the truth is that none of us are loving if we continue to browbeat people who don’t agree with us.

… With the long election season looming ahead, can’t Christians assume the best about one another, no matter how differently we see things?

She can conceive of two and only two sides, and neither of those sides includes the actual human beings whose legal equality — whose lives and loves — are at stake here.

Nice is different than good, but opposing legal equality for others is neither. It’s simply unfair.

It’s probably best to be fair and also kind, but fairness is the important part. As long as you’re fair, no one else will really care whether or not you’re particularly kindly about it. But if you’re not fair, then kindness isn’t even a possibility.

It’d be great if those could come along later, but they’ll have to wait. None of those matters a bit right now because none of those is what’s missing right now.

What’s missing right now is the bare minimum, the essential first-step starting point of simple legal equality — simple human equality. I don’t care if Scott grants it churlishly, spitefully or reluctantly, but until she grants that then all her talk of graciousness, kindness and civility is empty talk and clanging cymbals.

Scott wants to carve out a space in which she can be unfair, but still kind. Such a space does not exist and cannot exist.

Halee Gray Scott is unfair. And thus she is also unkind.