‘Suburban’ is not the same as ‘theologically conservative’

Over the past, say, 60 years or so, America has become increasingly suburban. Those churches that rose to prominence in city centers have declined in prominence along with their cities, while suburban forms of church have grown along with the suburbs. 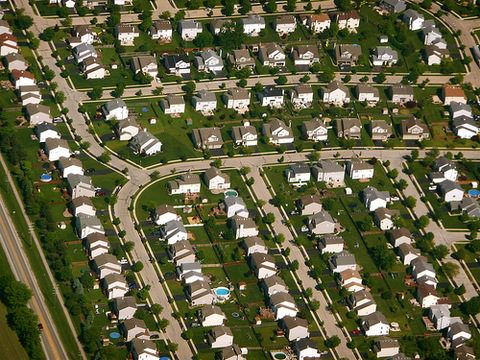 Ross Douthat’s attempt to frame that development as a matter of “liberal vs. conservative” theologies isn’t quite wholly beside the point, but he elevates a corollary effect to the point where he begins to confuse it with a cause.

The effect of this has been huge and pervasive. It has tended to favor forms of church and flavors of theology that fall toward the conservative end of the culture-war spectrum, but it’s misleading to therefore refer to this as a more “conservative” theology. Radical changes and a massive break with the theology, traditions and institutions of the past aren’t usually the sorts of things we describe as “conservative.”

The suburbanization of American Christianity has had a huge impact on institutional and denominational structures. Automobile-shaped development has produced an automobile-shaped ecclesiology. The car has abolished the possibility of the parish. And that, in turn, has helped to redefine “neighbor” as a matter of preference more than of proximity — as optional rather than obligatory. That redefinition is rather significant, since “Who is my neighbor?” is kind of an important question for Christians.

The suburbanization of American Christianity has altered our theology in other fundamental ways. Consider, for example, the church-growth movement and its focus on the archetypally suburban idea of the “homogenous unit principle.” Could there be a more radical rejection of Pentecost than that?

Conforming to the suburbs produced a host of major changes in American Christianity — major breaks with the past. How is it that the churches that have raced to adopt such revolutionary innovations are routinely cast as the “conservative” faction?

The answer, I think, has little to do with theology and everything to do with politics. The suburbs have become a Republican stronghold, and thus all that is suburban has come to be viewed as “conservative.” That’s part of why the hallmarks of “conservative” churches remain political: opposition to abortion, opposition to homosexuality, etc. And that’s a big part of why these radically modern, newly suburbanized theologies came to be regarded as conservative and — even more outlandishly — as “traditional.”

July 17, 2012
'Can Liberal Christianity Be Saved?' or How Rudolph Bultmann is killing the city of Detroit
Next Post