Fred Phelps: Why it is not possible to believe that you ate Chick-fil-A because of ‘freedom of speech’

Fred Phelps: Why it is not possible to believe that you ate Chick-fil-A because of ‘freedom of speech’ August 5, 2012 Fred Clark

It obviously did not. I know it. You know it. Everyone knows it. 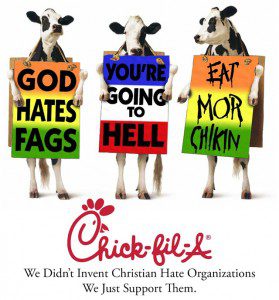 That’s why if you say you went to Chick-fil-A “Appreciation Day” because of “freedom of speech,” everyone knows you’re just play-acting.

Phelps is a reprehensible human being, but he’s a skilled publicity hound, so I find it hard to believe that the chuckling hordes of chicken gobblers last week were unfamiliar with Phelps and his body of work. They’ve seen his signs. They’ve seen him on the news, in the paper, on the Web. Their kids may even have played him in the school play.

Anybody claiming to believe that the freedom to speak against homosexuality is somehow under threat has to explain how such claims could possibly be compatible with the continuing freedom of the deliberately obnoxious Fred Phelps.

And that cannot be done.

You say you went to Chick-fil-A to stand up for the freedom of speech? Nonsense. Fred Phelps.

Fred Phelps therefore no one is able to believe you.

So since no one is able to believe the pretense, drop the act. Last week’s ugly display was not inspired by some noble defense of freedom of speech. There was nothing noble about it.

But don’t be too hard on him. After all, he’s on your side, and that’s all that matters, right?