Setting the world on fire for Jesus

Setting the world on fire for Jesus August 7, 2012 Fred Clark

A peculiar fellow in a pink shirt stands on the lawn in front of General Mills headquarters. He holds a box of Honey Nut Cheerios and a propane torch.

One out of every eight boxes of cereal in this country is Cheerios. This is really the treat now for the homosexuals. And this is our protest of General Mills — right there — advocating same-sex marriages. So we are gonna torch some cereal.

It goes downhill from there. The plastic liner of the cereal box erupts in flames just as a strong gust of wind kicks up and, well, the lawn catches fire. 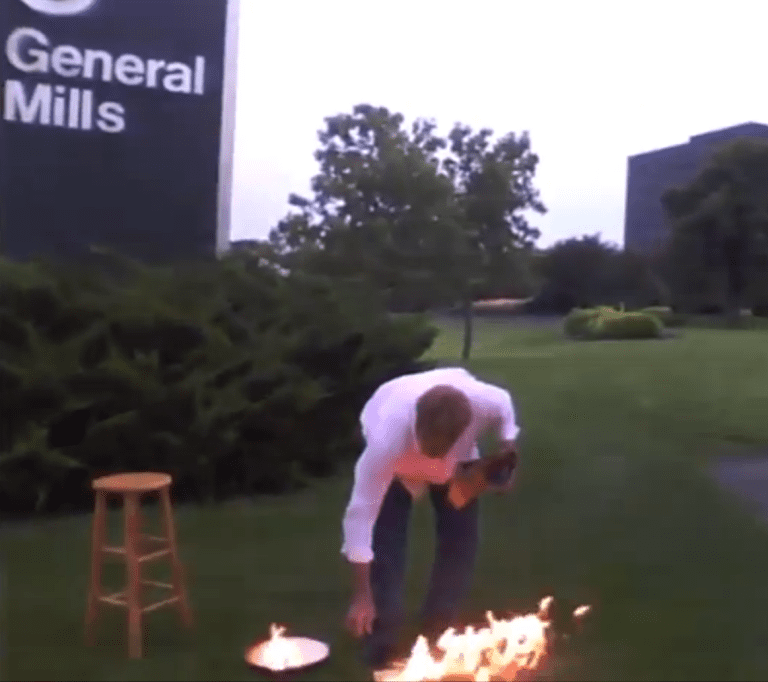 “OK, get out of here, guys,” the man says to the giggling person shooting the video. “Quick! Quick get in the car!”

The video went viral — and not because the people sharing it were impressed with this man’s bold, principled stand in the culture wars.

The odd thing, though, is that everywhere I saw this video linked and posted initially, the man was identified as a Christian or a preacher or some kind of evangelical protester.

I assumed that everyone assuming that was correct, but it was odd because nothing the man says or does in the video identifies him as such. He doesn’t mention God or the Bible or in any way identify himself as a religious person. There’s nothing sectarian in the video at all.

So why did everyone assume that this man was an evangelical Christian?

More specifically, because he’s disproportionately concerned with being anti-gay and he’s choosing to express that concern in a goofy, obnoxious and destructive way.

And in the present age, in 2012 in America, all of that marked this man as an evangelical Christian just as surely as if he were wearing a Jesus-fish necklace and a Newsboys T-shirt.

That’s three “pleases” there, because I am begging — I am begging my brothers and sisters, my fellow evangelicals here in America, to step back and think about how we got to this sorry state of affairs.

That video? This is who we are now in the eyes of the world. And they are not wrong to see us this way.

Oh, and as for that assumption that everyone was making the other day, that this goofball with the flaming Cheerios must be some sort of evangelical Christian?

August 7, 2012 Battling imaginary Satanic baby-killers in Utah and Ohio
Recent Comments
132 Comments | Leave a Comment
"yeah, they should have more evidence than just at that one site. Tunguska wasn't just ..."
P J Evans A night with Lot in Sodom, ..."
"I think there is something to be told for when the bullied person snaps, some ..."
Shadsie And in Samaria, and unto the ..."
"I personally do not like the song "Imagine." It feels too conformist to me. Tell ..."
Shadsie And in Samaria, and unto the ..."
"Speaking of Bronze Age comets...Listening to the Fall of Civilizations podcast on my long, long ..."
Dane A night with Lot in Sodom, ..."
Browse Our Archives
get the latest updates from
slacktivist
and the Patheos
Progressive Christian
Channel
POPULAR AT PATHEOS Progressive Christian
1