I recently quoted from Mere Christianity, a passage in which C.S. Lewis warns against seeking “the sheer pleasure of thinking your enemies are as bad as possible.”

That temptation, Lewis says, is “the first step in a process which, if followed to the end, will make us into devils.”

That’s how it works. We can seek good and seek to do good. Or instead we can seek to feel good by reassuring ourselves that at least we’re better than others. And the worse we make those others out to be, the better we can make ourselves feel. That “process” leads inexorably to pretending that those others are superlatively evil so that, by comparison, we can pretend that we are superlatively good. 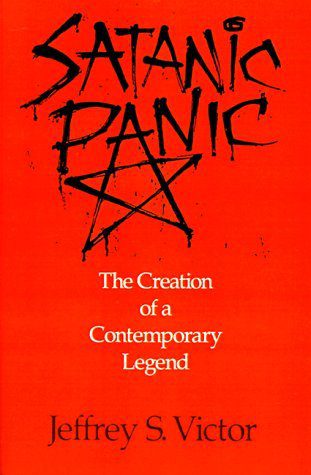 Once you understand that process, you understand why so much of the rhetoric of American evangelicalism has come to be overrun with Satanazis. Those are the forms of superlative evil in our popular imagination — Satan and Nazis — and thus those are the things that this process inevitably leads us to accuse others of being.

It’s as old as the original blood libel and as contemporary as the latest radio broadcast from the American Family Association. The Satanic baby-killers may be a figment of our imagination, but that hasn’t stopped us from reshaping American Christianity in opposition to them.

All of which brings us to this story from the (Provo, Utah) Daily Herald: “Surviving Satan worship: Author helps victims heal.”

It reads like a flashback to the Satanic panic of the 1980s. The delusion and paranoid fantasizing in this story might be comical, unless you remember Michelle Remembers, or the West Memphis 3, or the thousands of other lives ruined during that period of transitional mass-hysteria.

The Daily Herald — a newspaper with, apparently, no editors or ethics — tells us about Judy Byington:

Byington is an authority on Satanists, and as a clinical social worker she spent years helping others heal from wounds so deep most would shrink from the task. With the permission of her clients, she has written about one woman’s experience of growing up within a coven and surviving. The book is called “Twenty-Two Faces.”

“This is a huge breaking story validating the existence of human sacrifices of children in our society,” Byington said.

One of few surviving chosen sacrifices from a Black Temple ceremony, Jenny Hill is the subject of Byington’s book “Twenty-Two Faces,” published by Tate Publishing. …

“Secret ceremonies in which malevolent men and women cloaked in hooded robes, hiding behind painted faces and chanting demonic incantations while inflicting sadistic wounds on innocent children lying on makeshift altars, or tied to inverted crosses, sounds like the stuff of which B-grade horror movies are made,” Byington writes in closing her 428-page work. “Some think amoral religious cults only populate the world of ‘Rosemary’s Baby,’ but don’t exist in real life. Or do they? Ask Jenny Hill.” 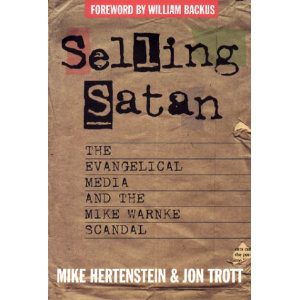 The reason this “sounds like the stuff of which B-grade horror movies are made” is that those movies are the source of the evil fantasies Byington is desperately pretending to believe in. It’s the same familiar stew of blood libel, Jack Chick, Vincent Price, Alice Cooper and Mike Warnke served up yet again as “a huge breaking story.” For someone so determined to live in an imaginary world, Byington has a dreadfully unoriginal imagination.

Part of what’s most disturbing about this article is that both Byington and the Daily Herald staff are so cheerfully titillated by all of this. They know they’re just playing make-believe, so they’re able to enjoy the thrills that come from imagining such things.

Others, however, haven’t had the luxury of a life so far removed from real evil that fantasies of Satanic baby-killers seem gleefully exciting. And I should note that some of the excerpt that follows could be upsetting for those who aren’t in on the game.

… Byington claims others remain at the mercy of the dark priests of hell. Satan worshippers live in Happy Valley and elsewhere in Utah, according to the author.

They have secret combinations. They live in duplicity. They torture and sacrifice the innocent. They give birth in secret so the babies they sacrifice have no birth certificate record. They take the time to learn speaking Latin backwards from what is called the Black Bible.

… “I remember back when Jenny and I started to write her biography. At the time I had given myself a pseudonym to put as the author,” Byington said. “Then Jenny told me she wanted her real name on the book. She had pure faith that Heavenly Father wanted this story told. He would protect her and she would be exposing the truth, not hiding behind it.”

She said she decided that if Hill, who at age 5 had been forced to kill a tiny baby with a knife, raped by her father every Thursday for years, tortured, mind controlled, witnessed the murder of an unknown child, and threatened with death if she ever told anyone — she could be brave enough to use her real name on the book, too.

For Byington, this brazen bullshit is just part of the game. For her it’s nothing more than a source of self-righteous titillation and, she hopes, lucrative royalties.

But as we learned in the 1980s, this game is not harmless.