Fundamentalist Christians are fond of the final verses of the book of Revelation:

The grace of the Lord Jesus be with all the saints.

No, not that one, of course. They don’t tend to think of “grace” as a defining characteristic of the Lord Jesus. Nor do they believe such grace should be extended to all the saints (at least not to all the people who claim to be among the saints — certainly not to the egalitarians, liberals, homosexuals, Episcopalians, papists, peaceniks, etc.).

No, they’re fond of the verses before that one:

No, no, no — not those verses either, obviously. And certainly not these ones from earlier in that chapter:

Then the angel showed me the river of the water of life, bright as crystal, flowing from the throne of God and of the Lamb through the middle of the street of the city. On either side of the river is the tree of life with its twelve kinds of fruit, producing its fruit each month; and the leaves of the tree are for the healing of the nations.

“The healing of the nations”? That’s hippy-talk! Plus it sounds like some kind of internationalist U.N. plot. Smells a bit too much like Agenda 21.

By “this book,” John of Patmos meant his book — his apocalypse, or what we call the book of Revelation. But fundamentalists, once again stretching that word “literally,” apply John’s threat of a curse to the entire Bible, by which they mean the 66-book Western Protestant Christian Bible — a canon that wasn’t settled on until centuries after John was writing. 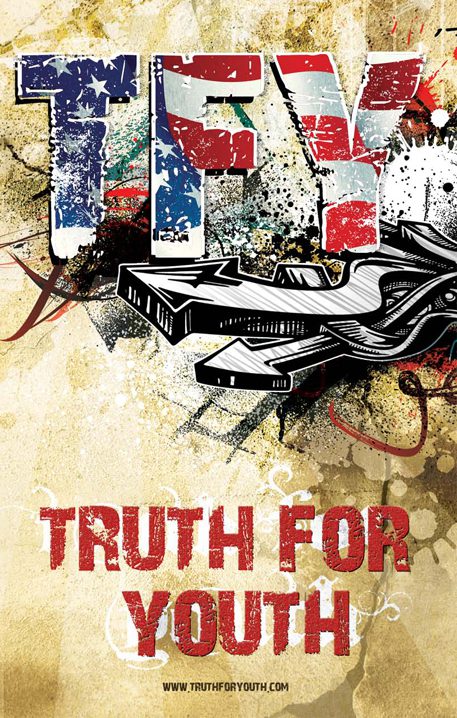 And yet, if you spend any time among American fundamentalists, reading their literature or listening to their sermons, you’re bound to hear these verses invoked and always as applying to the entire canon of their Protestant, King James Bible.

Joe Jervis points us to a recent, and very typical, example: Something called the “Truth For Youth” Bible.

This “enhanced” edition of the Bible is now being promoted by the American Family Association (home of AIDS-denier Bryan Fischer) and its boycott-happy wing, One Million Moms (home of dozens of moms). It’s produced by evangelist Tim Todd, who seems nostalgic for the Satanic panic of the 1980s.

Here’s part of AFA’s description of this “unique evangelism outreach”:

The Truth For Youth Bible consists of the New Testament in the God’s Word translation, along with 100 pages of powerful full color comic stories that are packed with “absolute truth” regarding issues young people are faced with, such as: Sexual Purity, Homosexuality, Abortion, Pornography, Evolution, Drugs, Drunkenness, Peer Pressure, School Violence, Sorcery, Witchcraft and Secular Rock Music. God’s wonderful plan of salvation is incorporated into each of the stories.

This solves a great dilemma for culture warriors. They really wish the Bible spent more time talking about the things they’re obsessed with, but the actual Bible is a terrible disappointment on this score. Yeah, it’s got a handful of clobber verses on homosexuality and drunkenness, but not nearly as many as they wish were in there.

And when it comes to condemning abortion or secular rock music, the Bible is silent and therefore pretty much useless.

So what’s a righteous culture warrior to do? What else? They just have to add new stories to the Bible — “issue-based” culture-war stories that teach the lessons the Bible ought to have taught if it hadn’t been such a disappointment in its original form.

And then, to make sure that no one treats these new, added sections as less meaningful, they stress that these additions are “absolute truth.”

The result is a new, improved Bible — a book that no one is ever going to mistake for one that would advocate, or even tolerate, “the healing of the nations.”