Korean religious leader Sun Myung Moon — a self-proclaimed Messiah, conservative political donor, and owner of a media and real-estate empire — has died at the age of 92. 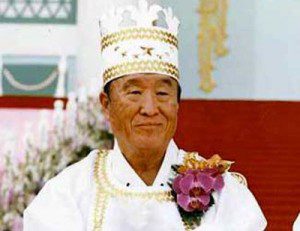 Steve Hassan describes how life once looked to him from inside Moon’s Unification Church.

Emma Brown has a long obituary in The Washington Post:

His stated ambition was to rule the world and replace Christianity with his own faith, which blended elements of Christianity, Confucianism and Korean folk religions. A leading symbol of the 1970s cult wars in America, he attracted a great deal of attention and ridicule for holding mass weddings for Unificationist couples whom he had paired, often without the prospective partners ever having met.

But his success in business and involvement in American politics “demanded that people who could care less about his peculiar doctrinal views pay attention to him,” said James Beverley, a professor at Tyndale University College and Seminary in Toronto who has studied Mr. Moon’s church since the late 1970s.

… To much of the outside world, Mr. Moon undercut his credibility with grandiose statements. “God is living in me and I am the incarnation of himself,” he said, according to sermon excerpts printed in Time magazine in 1976. “The whole world is in my hand, and I will conquer and subjugate the world.”

He never did conquer and subjugate the world, but he did make a ton of money with a global business empire that exploited the free labor provided by his faithful followers.

So he was an exploitative megalomaniac and he supported right-wing politics — but I guess that’s redundant.

One of the more interesting responses comes from Ellen Barker, who says Moon’s death “marks the end of an era”:

Moon was the last surviving charismatic leader of the wave of movements that spread throughout California and the rest of the West in the 1970s and ’80s — other examples included L. Ron Hubbard’s Scientology, David Berg’s Children of God and Prabhupada’s Hare Krishna movement.

Prabhupada, the ISKCON founder, strikes me as a separate breed from those others — more of a religious figure than a megalomaniacal huckster like Moon or Hubbard. But Barker’s general point again stands: Moon is dead, and they don’t make ’em like him anymore.

I think that’s true mainly because there’s no longer any need to follow that path if you’re trying to attain what Moon sought: money, power and deference.

Moon certainly succeeded on the first two points, but the broader respect he always craved eluded him. He had to settle instead for a more concentrated, stovepiped version of it. He was the object of awed worship and reverence from his followers, but the object of scorn, ridicule and mockery from the wider world.

That’s the downside of this cult game. And that downside, I think, is why Moon is the last of his kind.

Today, there are many easier paths to the same goals — more respectable and potentially more lucrative means to the same ends.

Consider Jerry Falwell, Pat Robertson, James Dobson, Ken Ham or Ralph Reed. They’re chasing the same dreams as Moon chased — money, power, deference. But they’ve found a way to do it that doesn’t result in their being shunned by the powerful people they long to cozy up to. They have carved out a niche that lets them exploit their followers and still maintain the veneer of respectability that let’s them have their pictures taken with presidents and governors.

Moon declared himself a god and a Messiah, but it’s far easier just to recast God and the Messiah in your own image and then go from there. It takes too much work to recruit tens of thousands of followers who will give you every penny they earn. It’s far easier just to maintain a database of tens of millions of “supporters” who can be relied on to send small checks to help you stop the Satanic baby-killers, the godless evolutionists, the Gay menace, and the socialist agenda of the Antichrist’s coming one-world government.

No need to start a new religion when you can just piggy-back onto an existing one and change it to meet your needs, serving your quest for money, power and deference.

September 4, 2012 Smart people saying smart things
Recent Comments
26 Comments | Leave a Comment
Browse Our Archives
get the latest from
slacktivist
Sign up for our newsletter
POPULAR AT PATHEOS Progressive Christian
1