During a private fundraiser earlier this year, Republican presidential candidate Mitt Romney told a small group of wealthy contributors what he truly thinks of all the voters who support President Barack Obama. He dismissed these Americans as freeloaders who pay no taxes, who don’t assume responsibility for their lives, and who think government should take care of them. Fielding a question from a donor about how he could triumph in November, Romney replied:

There are 47 percent of the people who will vote for the president no matter what. All right, there are 47 percent who are with him, who are dependent upon government, who believe that they are victims, who believe the government has a responsibility to care for them, who believe that they are entitled to health care, to food, to housing, to you-name-it. That that’s an entitlement. And the government should give it to them. And they will vote for this president no matter what…These are people who pay no income tax.

Romney goes on to say that such moochers can never be convinced “to take personal responsibility and care for their lives.” 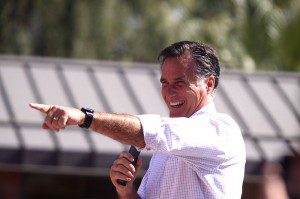 Josh Marshall tries to make sense of this, saying “Mitt seems to string together a handful of really distinct conservative talking points — and in a way that makes you think he just heard them in a fragmentary way and pasted them together without any clear sense of what he was saying.”

But it’s really weird to suggest, as Romney does, that this is the same 47 percent.

Last time I checked, there were plenty of senior citizens who are also Republicans. And those folks don’t take kindly to being told they’re “dependent” on government, or that they’re whiny moochers with a sense of entitlement.

No one likes being accused of that. Not senior citizens, not students, not the working poor. Not Democrats, or Republicans, or Independents.

Ari Kohen wonders why Romney even wants to be president: “Why would you want to be president of a country when you hold almost half of the citizenry in utter contempt?”

Josh Barro thinks the “combination of contempt and pity that Romney shows for anyone who isn’t going to vote for him” will be politically disastrous.

Ed Kilgore wonders what will be more harmful to the Romney campaign: “the video … or the ‘Hell yes!’ reactions to it from the rawer elements of the conservative chattering classes.”

“Romney’s theory of the ‘taker class,'” Ezra Klein says, is “core to his economic agenda.” The idea that America is divided between “makers” and “takers” isn’t true, Klein writes, but “Behind this argument, however, is a very clever policy two-step that’s less about who pays taxes now and more about who is going to pay to reduce the deficit in coming years.”

Conservative Ramesh Ponnuru agrees that Romney’s “makers vs. takers” idea is false. It is also, he says, bad politics: “most people don’t see themselves in that storyline, any more than they see themselves as dependents of the federal government. They don’t see Americans as divided between makers and takers.”

Ryan Chittum has some good background on the roots of Romney’s rehash and mishmash of the old “lucky duckies” canard.

Coates ends on an unexpectedly hopeful note. “When the party of white populism finds itself writing off half the country,” he writes, “we are really close.”

Charlie Pierce is less hopeful. Now that Romney has “declared a class war on himself,” Pierce says, “There’s really only one campaign left to him now”:

The full video of Romney’s remarks at the fundraiser may not be as initially damaging as his disdainful comments about the entitled moochers who think they’re victims, but as more of the speech receives attention, the rest of it won’t be good for Romney’s campaign either.

Romney’s rejection of a two-state solution in the Middle East, for example, won’t likely win him many votes. Particularly when he outlines his idea of foreign-policy leadership: “We have a potentially volatile situation but we sort of live with it, and we kick the ball down the field and hope that ultimately, somehow, something will happen and resolve it.”

Romney isn’t about “hope and change.” He’s about “hope that ultimately, somehow, something will happen.”

September 18, 2012
From the archives: Rick Warren and The Purpose-Driven Lie
Next Post