The cover story on the current issue of Christianity Today is “50 Women to Watch.”

Many people seem to have misunderstood that headline. CT meant it in a positive sense — as in “here are a bunch of people you’ll want to keep an eye on because they’re doing interesting things.” But the self-appointed gatekeepers of the evangelical tribe never interpret anything positively. They’re treating this list as if it was a watch-list put out by the tribal Department of Homeland Security. For them, this is a list of “50 Women Against Whom One Must Be Vigilant.”

Denny Burke — Alfalfa to Al Mohler’s Spanky at Southern Baptist seminary — kicked things off by scrutinizing the list for “non-evangelicals” and criticizing CT for treating “high-achieving women excelling in their respective fields as something to be celebrated.” 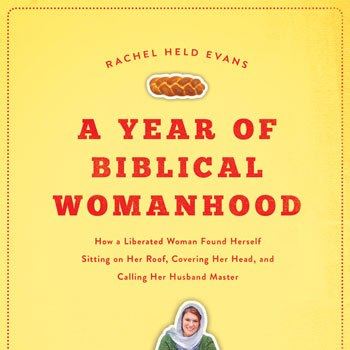 That’s a no-no for Burke, because in his eyes, women should only be commended for “excelling in roles that the scripture commends.”

And, no, for Burke that doesn’t mean apostles like Junia, deacons like Phoebe, prophets like Huldah and kick-ass military leaders like Deborah. For Burke, “the scripture” is a lot smaller than that. Very, very small. Cramped. Stunted. Tiny.

Burke is particularly irked by the inclusion of Rachel Held Evans in Christianity Today’s list. Well, at first he just seems irked, but then when you read through his own comments in the long thread for his post it’s clear he’s not so much angry as afraid.

This is apparently a thing. Evangelical gatekeepers are scared of Rachel Held Evans. Her next book, A Year of Biblical Womanhood, comes out later this month and already they’re panicking. See for example the patriarchal Gospel Coalition’s hatchet-job review, in which designated female complementarion Trillia Newbell slathers on faux-lamentation like a parody of the “it grieves me to write this” passive-aggressiveness that evangelicals resort to when they really hate someone. Or see Al Mohler’s panel discussion defending “Inerrancy,” in which Evans’ book was singled out for supposedly “mocking the Bible.”

This panic is so palpable it’s even getting attention outside of the subcultural bubble. Slate’s Ruth Graham has a rundown of the conservative effort to gin-up some kind of “controversy” over Evans’ book:

What’s oddest about this whole dustup is how uncontroversial Evans’ book is. For most readers, A Year of Biblical Womanhood won’t prompt any pearl-clutching. Its author is a devout Christian, the large Christian publisher Thomas Nelson is publishing it, and Evans calls its content “super-PG” — no bad words, and “not even that aggressively egalitarian or feminist.”

… Evans proudly identifies as evangelical, but not everyone will allow her that label. … Her offenses include insufficient deference to the concept of Biblical inerrancy — the notion that the Bible is completely free of error — and her willingness to serve communion to gay churchgoers.

Graham focuses on the Southern Baptist-controlled LifeWay bookstore chain’s decision not to carry Evans’ book. Graham notes that LifeWay has 160 stores in 26 states and, as one of the largest Christian bookstore chains, it sets the tone for many of its competitors.

That makes LifeWay very influential. They’re like the Border’s of Christian book-selling. And everyone knows it’s impossible for any author to reach any significant audience if Border’s refuses to sell their book … said the marketing analyst in 1994.

Border’s is bankrupt. It’s gone. Amazon.com and the Web killed it just as surely as they are killing the ability of would-be gatekeepers to control and constrain what their congregations are able to read.

LifeWay is bigger and more powerful than Rachel Held Evans. If that were the dynamic here — LifeWay vs. Rachel — then LifeWay might, as Graham fears, succeed at alienating Evans from the evangelical “community she loves and writes for.”

This will simply be a repeat of the same dead-ender logic that caused LifeWay to stop carrying the movie The Blind Side. Here’s what I wrote about that back in July:

The walls are gone and no one — not even conservative, sheltered, evangelical-leaning-fundamentalist Southern Baptists — needs to go through the gates or the gatekeepers anymore.

I think that’s the real cause of the panic we’re seeing from folks like Burke, Mohler and John Piper. Their control depends on preventing their followers from being exposed to other ideas, but they are no longer able to prevent those followers from accessing those insubordinate ideas because the Web has put them all one click away.

And because the Web exists outside the boundaries of the subculture they control, it also tends to operate according to the rules that govern the wider world. Inside their bubble, “controversy” is used to silence authors and to ban books. Label an author “controversial” and her book becomes viewed as dangerous — as something to avoid. But out here, outside the bubble, controversy sells books.

Evans, then, represents both of the things that terrify them. First, she’s a smart, engaging, outspoken woman who knows the Bible, and as such her words must be kept from reaching the flocks these gatekeepers are fleecing. And second, she’s a Web-savvy writer who has risen to prominence through her blog and through Twitter — the media forms these gatekeepers haven’t yet figured out how to constrict and control. She’s kind of their worst nightmare.

October 15, 2012
The way to find a certain something
Next Post