I struggled with it myself for a long time, but I came to realize life is that gift from God, and I think even when life begins in that horrible situation of rape, that it is something that God intended to happen.

Ta-Nehisi Coates clarifies what that means:

2. He also believes that whenever conception occurs, God intended it and it is a gift.

3. He further believes that rape is one way in which conception sometimes occurs.

4. Thus he believes that conception through rape is a gift from God and furthermore intended by God. 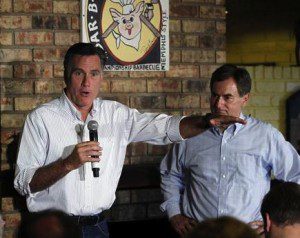 Or, as Jill Filipovic summarizes: “[Mourdock] did not say that rape is a gift from God. He did say that an unwanted pregnancy is a post-rape goodie bag from the Lord. And that the Lord intended it to happen that way.”

Or, per Sarah Sentilles: “If the pregnancy is a gift from God and God is in control of everything, then the rape is also God’s work — for that’s how the woman got pregnant.”

Garance Franke-Ruta cuts to what I think is the core of Richard Mourdock’s plan — or, his interpretation of God’s plan, which amounts to the same thing: “A man who forces a woman to bear his child through forced sex should be permitted to do so, because abortion is murder and every conceived child is a gift from God.”

That can be stated in the other direction as well: Abortion is murder and every conceived child is a gift from God, therefore a man who forces a woman to bear his child through forced sex should be permitted to do so.

Post-rape pregnancies are where blanket anti-abortion views become de facto support for coercive mating and the legally sanctioned denial of agency to women not only on the question of whether to have a child, but who the child’s father should be.

…  The idea that coerced reproduction is God’s will is of a piece with the belief that the subjection of women is God’s will. The two ideas are inextricably intertwined historically, and the former is stubbornly resilient relic of the latter. To unpack this a bit more: According to Mourdock’s thinking, a man who forces a woman to have sex with him against her will is a criminal, but a man who forces a woman to bear his child through forced sex should be permitted to do so, because abortion is murder and every conceived child is a gift from God.

Do we want to live in a country where any man at any time can decide he wants to bear children with any woman and she has no right to stop that from happening if he can overpower her by force? If we do — and that’s the society Mourdock is advocating — then we have immediately left the society the feminists constructed and re-entered one where coerced mating is rewarded reproductively.

It doesn’t matter. Whichever one he latched onto first was bound to introduce the other. The two things require one another and cannot be separated.

“Where Do You Find a Theology of ‘God-Intended Rape’?” Tony Jones asks. He answers with a quote from John Piper that offers a Calvinist perspective in which “God has a purpose” for deadly bridge collapses.

Other Calvinist theologians are appalled by Piper’s views — and Mourdock’s. G. Jeffrey MacDonald of The Christian Science Monitor offered several Calvinists the chance to distance themselves from Mourdock’s notion of providential rape. They jumped at it:

What Mourdock said “is offensive,” says Richard Lints, a theologian of the Reformed tradition, which has Calvinist roots, and dean at Gordon-Conwell Theological Seminary in South Hamilton, Mass. “The clumsiness is [to] so align God with evil that God becomes a horrific figure. It’s contrary to anything you read in scripture, and it removes the human responsibility.”

… “The Calvinist would say God has permitted [bad] things to happen” because humans have free agency, says Gary Scott Smith, a Presbyterian minister and historian at Grove City College in Grove City, Pa. “But we should not attribute [evil things] to God, even though God can bring good things out of them.”

Susan Brooks Thistlethwaite is a woman, and therefore someone John Piper refuses to be taught by. That’s a shame, because she schools him and Mourdock on the implicit blasphemy of their providence-by-predator theology:

Rape is sin by the perpetrator and God does not cause sin. Conception following rape is a tragedy, not part of “God’s will.” The capacity for tragedy to occur in human life, and indeed in what we call “natural evil” like earthquakes, is a result of what Christians call “the fall” from perfection as described in Genesis.

… It is cheap, easy and wrong to attribute all that happens in the world to God, as this makes God the author of sin and evil, and thus less than all good.

MacDonald’s Monitor article did find some Calvinist types willing to defend the Piper/Mourdock idea of predatory providence. Peter Thuesen warns, “If you start restricting the scope of providence, that’s a slippery slope to atheism. … It calls into question whether there really is a God who controls all things.”

Not really, no. But it does call into question whether there really is a God who votes Republican due to their extreme opposition to legal abortion.

As Franke-Ruta shows, that’s the theological error here — not some warped form of Calvinism. Mourdock and Piper express a warped form of Calvinist theology because they started out as Calvinists, then allowed that belief to be warped by the inescapable ramifications of the anti-abortion dogma that they have made the bedrock core of their religion.

Sarah Sentilles notes that this warped “God intended to happen” theology is a majority view among white American evangelicals, and provides a helpful description of how this shapes one’s understanding of the world we live in:

Imagine God up there looking down at the world and planning our days: Should the Giants go to the World Series or should it be the Cardinals? Giants. Should that woman make it through the intersection safely or should she wreck? Wreck. Should that child suffering from malaria live or should he die? Live. If God allows certain things to happen and prohibits others — if God intends certain things instead of others — then it follows that God approves of what God chooses. Then it follows that God intended you to get pregnant by being raped. He planned it; He asked for it; He wanted it.

The logic is circular: whatever happens, God meant it to happen. The very occurrence of something, then — snow, a home run, illness, rape — becomes its own kind of justification, a way to prove it’s what God wanted — which means all kinds of oppression can be cast as God’s will. So where does it end? What can’t be justified by appealing to God’s intention in this way? This essay? God intended it (as if that will stop all the hate mail I’m likely to get when this posts). Flood? God intended it. Pregnancy? God intended it. Environmental destruction? God intended it. Mass extinction? Hate crimes? Slavery? Genocide? God wanted it all.

But not all theologies of redemption are created equal. Barnes’ theology makes God into a micromanager of sin, redeeming sins one by one, turning each in turn into another cool refreshing sip of spiritual lemonade. God is sovereign over every outcome, stepping in at every instance of wickedness to miraculously turn it to the good of those who trust in Him (sometimes by making babies out of rapes, sometimes in other ways).

October 28, 2012
Obama and the 'social justice tradition' of American Christianity
Next Post