Rolling Jubilee: Proclaim Liberty Throughout all the Land

Ezra Klein describes a scene from the documentary The Queen of Versailles: 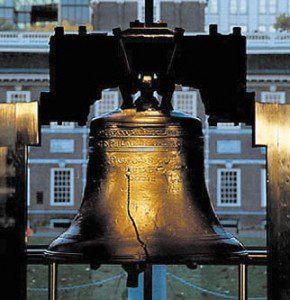 David Siegel, CEO of Westgate Resorts, the largest time-share company in the world, is hosting a party. The party is in his huge mansion. But it’s not in his hugest mansion — the 90,000 square foot, still under-construction “Versailles” — which is, at that moment, falling into foreclosure because Siegel can’t keep up on the payments.

Siegel, slumped in a ratty armchair, is regaling some friends with a tale that is, simultaneously, a sob-story about the desperate state of his finances and an extended boast about his skill at financial engineering. As Siegel tells it, he owes the bank $18.5 million, and he can’t pay. But the bank won’t write down the loan. So Siegel tapped a third-party to approach the bank about buying the loan, which they were able to do, for a mere $3.5 million. And then Siegel bought his $18.5 million loan back from the third-party at barely more than a sixth of its original value.

It’s nice to be rich. Millionaires like Siegel, being millionaires, don’t usually have to worry about being trapped by crippling debt, but even if they find themselves in that unusual situation, they have neat little tricks like that to liberate themselves from debt for a fraction of the cost. Matt Yglesias describes how Siegel’s little scheme worked:

All kinds of debt gets “securitized” these days. Instead of a bank just lending money and collecting interest, it sells the rights to that income stream as an Asset Backed Security. By buying up a diverse array of ABS you can end up with less exposure to idiosyncratic risk than if you’re just lending. But what happens when securitized loans go bad? Well they become “distressed debt” that can be purchased for pennies on the dollar.

That’s what Siegel’s “third party” friend did. Unfortunately, that’s not a solution available to most of us — or to the people who really need it. A time-share mogul who makes a string of bad bets during a bubble can slip away from $18.5 million in debt. But a working-class family hit by job loss or injury can be permanently impoverished by an $18.5 thousand debt, with no means of escape.

Because the merry mischief-makers of Occupy have come up with a scheme to help free working-class families from enslavement to debt by using the same tricks employed by the Siegels and Trumps of the 1 percent.

They call it Rolling Jubilee:

Rolling Jubilee is a Strike Debt project that buys debt for pennies on the dollar, but instead of collecting it, abolishes it. Together we can liberate debtors at random through a campaign of mutual support, good will, and collective refusal. Debt resistance is just the beginning. Join us as we imagine and create a new world based on the common good, not Wall Street profits.

(Thanks to lonespark and alienbooknose and others who alerted me to this very cool idea.) So far, according to the Rolling Jubilee site, they’ve raised a little over $100,000 and used it to abolish about $2.2 million in debt — which is an even better return on investment than Siegel got. Here’s their video explaining the idea in simple terms:

Patrick Nielsen Hayden cuts to the core of what this means:

That this isn’t just an attempt to render charity to the needy; it’s an attempt to undermine a specific kind of power relationship. As understood and practiced today, debt is a kind of servitude. If you have to take on unsustainable debts — or if you have the misfortune to live in a country that took on unsustainable debts — you’re just supposed to quietly accept that your life is permanently f–ked, and that your creditors get to dictate its terms.

The quote in the title of this post is from the Jubilee passage in Leviticus 25 — the one engraved on the Liberty Bell. But it’s a mistake to think that because the biblical Jubilee first appears in Leviticus and Deuteronomy it must be some obscure and ancient law — something akin to dietary rules or sacrificial prescriptions. Jubilee is woven throughout the whole of the Bible. It’s a refrain that echoes all through Isaiah and the other prophets. Jesus announced his ministry by declaring himself the fulfillment of Jubilee. It pervades his parables. And, as Richard Beck notes, the Lord’s Prayer is a Jubilee prayer.

And spare me any bloody penal substitutionary horror scenarios, Jubilee is the essence of atonement. Jubilee is who Christ was and Jubilee is what Christ did.

All of which is to say that Jubilee is pretty important for us Christian types. And I think Bethany Keeley-Jonker is right to call the Rolling Jubilee a “beautiful step” and a reflection of “God’s economy.”

The Rolling Jubilee is limited, small and quixotic. It can’t address government-backed student loans. And, unlike Siegel’s buddy, it’s not set up in a way that lets it choose — or even know — who will benefit from its random compounding Jubilee.

Natasha Lennard also describes and anticipates some of the ways that creditors may push back to make this effort more difficult. She notes that the Rolling Jubilee is “just one tactic” but “quite a clever one”:

It might erase some crippling debts; it might forge new networks and affinities. It’s certainly an intriguing experiment.

November 13, 2012
Chick-fil-A Biblical Family of the Day
Next Post