#progGOD: Incarnation and the problem with Aslan

In C.S. Lewis’ Narnia stories, Aslan often refers to the Pevensie children — humans from England transported to a magical other world — as “sons of Adam and daughters of Eve.”

Aslan, a mighty and noble lion, is intended as the Christ figure of Lewis’ Christian allegories. Lewis makes this anviliciously obvious. Aslan sacrifices himself to save the sinner Edmund, and then rises again. Aslan’s faithful people — the talking beasts and magical creatures of Narnia — revere him as the Son of God.

But Aslan doesn’t really work as a Jesus figure. The Pevensies may be the children of Adam and Eve, but Aslan is not. 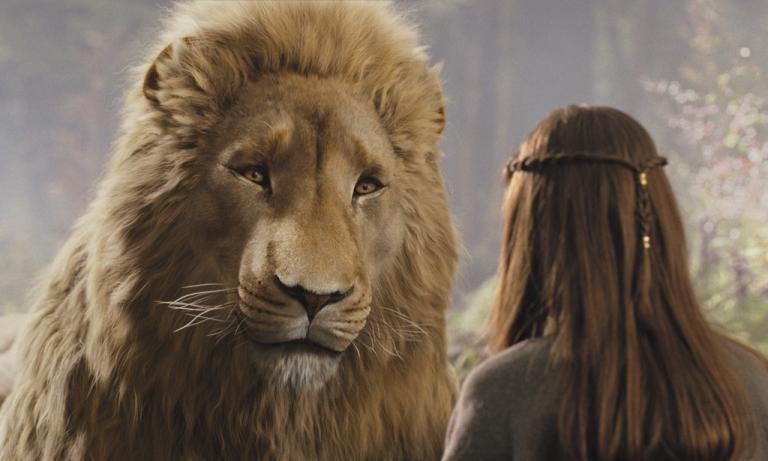 Narnia, in other words, is an allegory that lacks incarnation. And you can’t have a Christ figure without incarnation. That’s why the Gospels of Matthew and Luke begin with those genealogies and with the Christmas narratives we recall this time of year. The Gospels cannot be good news unless God becomes a child of Adam — and a child of Abraham, and of David.

That is why the Gospel of John begins with his own more cosmic version of the Christmas story — “He was in the world … the Word was made flesh, and dwelt among us.”

Aslan is fleshy, but his flesh is not our flesh, and he does not dwell among us. He may sort of work as a Christ figure for the other talking lions of Narnia, but not for the sons of Adam and daughters of Eve who visit that world. Nor for the humans of Archenland and Calormene (wherever they come from in that story), or for the dwarves of Narnia, or the fauns, dryads, beavers, mice, badgers, centaurs or other good folk of that world. (Lewis’ choice of a lion for Aslan also seems fraught with some Great Chain of Being baggage, which further undercuts the meaning of incarnation in his allegory.)

This is helpful, in a way. Lewis has inadvertently provided us with a kind of negative illustration of the importance of incarnation. By giving us an allegory centered on a pseudo-Jesus who is not a child of Adam, Lewis shows us how essentially important and pervasive the meaning of incarnation really is.

One place we see this in the Narnia stories is in the Stone Table sequence in The Lion, the Witch and the Wardrobe. Lewis attempts to illustrate his belief in a theory of penal substitutionary atonement, but winds up flailing a bit — deeper magic? — because all such theories of atonement only work if the person on the Stone Table or on the cross is one of us.

Or consider Aslan’s statement to the Pevensies in Prince Caspian:

“You come from the Lord Adam and the Lady Eve”, said Aslan. “And that is both honour enough to erect the head of the poorest beggar, and shame enough to bow the shoulders of the greatest emperor on earth; be content.”

Humans are good, Aslan says, because God created us as good. But that creation story is not the only story or the only way in which God affirms our goodness. We have other sources of “honour” that Aslan does not acknowledge.

God has shown that humans are worthy not just through creation, but through adoption, redemption and incarnation. God made us, God chose us, God redeems us, God became one of us.

I need to re-read the Narnia series with this in mind, to further trace how Lewis’ non-incarnate Christ figure alters the theology of the allegory. I suspect much of this also traces back to C.S. Lewis’ fascination with Plato. When “the word became flesh” gets translated into “the ideal became shadows,” then things are bound to get a bit wobbly with regard to the meaning of incarnation.

And that’s a problem in the Narnia series. An allegory of Christ without an incarnation is like … well, it’s like a world in which it is always winter, but never Christmas.

December 6, 2012
Chick-fil-A Biblical Family of the Day
Next Post