Twenty children and six adults have been killed in a shooting attack at a primary school in the US state of Connecticut, police say.

Lt. Paul Vance said the gunman was also dead, but did not identify him. 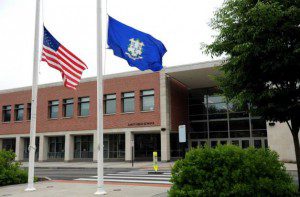 However, officials told US media the killer at Sandy Hook Elementary School, Newtown, was a 20-year-old son of a teacher at the school.

… Lt. Vance said 18 children were pronounced dead at the school, and two died after they were taken to hospital. Six adults were also killed. The gunman died at the scene.

According to US reports, the gunman’s mother was a teacher found among the dead at the school.

One person was also injured, and police were investigating a “secondary” crime scene, where another victim was found dead, Lt. Vance said.

He gave no details, but said New Jersey police were providing assistance.

We’ve endured too many of these tragedies in the past few years. And each time I learn the news, I react not as a president, but as anybody else would as a parent. And that was especially true today. I know there’s not a parent in America who doesn’t feel the same overwhelming grief that I do.

The majority of those who died today were children — beautiful, little kids between the ages of 5 and 10 years old. They had their entire lives ahead of them — birthdays, graduations, weddings, kids of their own. Among the fallen were also teachers, men and women who devoted their lives to helping our children fulfill their dreams.

So our hearts are broken today for the parents and grandparents, sisters and brothers of these little children, and for the families of the adults who were lost.

Our hearts are broken for the parents of the survivors, as well, for as blessed as they are to have their children home tonight, they know that their children’s innocence has been torn away from them too early and there are no words that will ease their pain.

As a country, we have been through this too many times. Whether it is an elementary school in Newtown, or a shopping mall in Oregon, or a temple in Wisconsin, or a movie theater in Aurora, or a street corner in Chicago, these neighborhoods are our neighborhoods and these children are our children. And we’re going to have to come together and take meaningful action to prevent more tragedies like this, regardless of the politics.