A roundup of responses to Friday’s tragedy

A roundup of responses to Friday’s tragedy December 15, 2012 Fred Clark

“I wanted them to know that someone loved them and I wanted that to be one of the last things they heard, not the gunfire in the hallway.”

“There’s only one funeral home in Newtown, Connecticut.”

“In America, it’s currently easier for a poor person to get a gun than it is for them to get treatment for mental health issues.”

“People need access to good mental health treatment but not because they might go out and kill someone but because healthcare, regardless of the reason, should be a human right.” 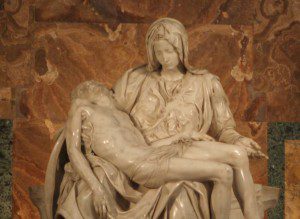 “It is long past time to stop taking seriously anyone who would claim that God allows gun massacres in response to U.S. Supreme Court rulings or what they believe to be insufficient levels of religious belief.”

“Those who insist that we should not ‘play politics’ with the victim’s grief conveniently ignore that politics is what caused that grief.”

“What would be disrespectful to the victims is acting as if this tragedy could not have been prevented.”

“To seek to silence willy-nilly those who raise these concerns by accusing them of politicizing a tragedy seems an attempt to shut down conversation — the conversation that needs to happen — perhaps out fear of where that conversation might lead.”

“At some point, we will have to stop putting it off, stop pretending that doing so is the proper, respectful thing. It’s not either. It’s cowardice.

“All we have learned from doing nothing is that nothing has been done.”

“I have no problem with the guy next door having a hunting rifle under lock and key, but there is no justification for any American civilian owning a weapon designed for killing lots of people quickly.”

“Although they are few and the number of victims only account for 1 percent of those murdered by firearms every year, the mass shootings deeply disturb us.”

“At what point do we start holding the National Rifle Association morally responsible for all these shootings?”

“One of these days it will be time to start pushing back against the disinformation, propaganda, and lies of the gun lobby.”

“We cannot develop a legislative or regulatory plan to address gun violence and mass killings if Congress won’t even agree to hold hearings on the issue.”

“If our policies on healthcare and firearms are such a good idea, how come no similar societies are following our example?”

“We call on the church to regain its courage and its voice, to bring its moral authority to the table, and to lead honest and full discussions on the role and utility of guns in our democratic society. If the church of Jesus Christ is not part of the solution, then our silence is part of the problem.”

“If the Church wanted to make itself relevant again, all denominations would band together and demand stricter gun control.”

“Let us be free, though the world perish.”