On his radio program Monday, Dobson offered his explanation for the massacre Friday at a Connecticut elementary school:

Our country really does seem in complete disarray. I’m not talking politically, I’m not talking about the result of the November 6 election; I am saying that something has gone wrong in America and that we have turned our back on God.

I mean millions of people have decided that either God doesn’t exist, or he’s irrelevant to me. And we have killed 54 million babies and the institution of marriage is right on the verge of a complete redefinition. Believe me, that is going to have consequences, too.

And a lot of these things are happening around us, and somebody is going to get mad at me for saying what I am about to say right now, but I am going to give you my honest opinion: I think we have turned our back on the scripture and on God Almighty, and I think he has allowed judgment to fall upon us. I think that’s what’s going on.

I feel bad for Dobson.

Like most of us, he is rightly horrified by the slaughter in Newtown. He is reeling, recoiling, and struggling to come to grips with the shock and sorrow he feels in response to the murder of 20 children, all aged 6 and 7, and of the teachers and school leaders who cared for them. 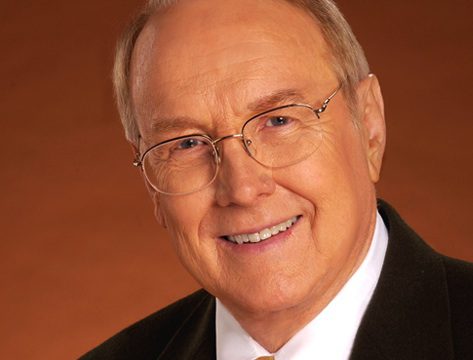 But Dobson has no way of expressing this horror and sorrow — not even to himself. He has elsewhere expended the vocabulary that would allow him to speak of it, or even to think of it, and it has left him with no words to articulate, to grasp or to convey the deep sadness he is feeling.

That sadness is right and true and appropriate. It is a proper human response to the murder of children.

But for Dobson, “the murder of children” refers not to Sandy Hook, but to abortion. Hence the weird assertion on his radio program Monday that the murder of 20 schoolchildren is somehow God’s judgment falling on America because of the murder of “54 million babies.”

The incoherence there comes from Dobson’s heartfelt and undeniable recognition that the Newtown massacre was far, far worse than any number of abortions. He knows that. He feels that.

But Dobson has painted himself into an ethical and rhetorical corner and so he cannot allow himself to admit that.

For decades, James Dobson has insisted that abortion is “murder,” that it is “killing babies” and that no distinction — ethical, moral, theological, legal — can be allowed between those “unborn babies” and actual babies. Like most evangelicals and many Catholics, Dobson has always fiercely maintained that the killing of unborn “children” is no different from the killing of actual children.

But whenever horrible crimes like this one occur, then Dobson, just like the rest of us, beholds what has happened and recognizes that it is vastly different and wholly incomparable.

Dobson knows this. Decades of rhetorical obfuscation have deprived him of any way of expressing it or of admitting it, but James Dobson still knows this.

All that talk has left him unable to describe what he is feeling or why. He doesn’t know how to name the sorrow he feels on the news of the actual murder of actual children.

But he knows that this is a different thing. He knows that his revulsion at this crime is nothing at all like the opposition he has always expressed to abortion, even though for all these years he has used identical language demanding that we all regard the two things as identical and equivalent.

We all know this. All of us. Even those of us who have staked our rhetoric, our politics, and our moral reasoning on the glib pretense that it is not so.

Every “pro-life” evangelical, every Operation Rescue picketer, every March for Life participant, every Christianity Today editorialist, every Catholic bishop, priest and pope knows that the murder of 20 children is essentially different and far worse than any 20 abortions. All their beloved rhetoric of “abortion is murder” and “abortion kills unborn children” turns to ashes in the wake of incidents like the slaughter in Newtown.

It seemed so simple. Declare that “personhood begins at conception” and everything clicks neatly into place. You can then insist that no ethical or moral distinction exists between a fetus and a child, between a zygote and a 6-year-old. And ethics seems so much simpler when we don’t have to make or acknowledge distinctions. Then we can have thick black lines and unambiguous rules. We can make sweeping ethical claims with the certainty and clarity we have always coveted.

That certainty and clarity is a delicious indulgence. It means we don’t even have to listen when others point out the distinctions that might threaten our clear, bold lines. When others try to argue that a fetus has great value, but not the same value as a child or as a mother, we can dismiss them as apologists for “murder.”

The simplicity and clarity of this claim of personhood-from-conception is so appealing that most of the time it more than makes up for the persistent nagging intuition that it’s not true. The appeal is almost enough to overcome the sense we can never be rid of that a zygote and a 6-year-old are obviously different, and that pretending the two are equivalent is deeply offensive to some moral intuition that we can never wholly silence.

And when, as on Friday, something horrific happens to force us to remember that, then even someone like James Dobson — one of the most forceful and vocal proponents of the “abortion is murder” claim — is unable to maintain the pretense.

That pretense is corrosive. It is rotting the hearts, minds, souls and tongues of good Christian people. And it has to stop.

Read the names of the slain children — the precious persons murdered Friday in Newtown.

Can you do that? Can you sustain that pretense?

December 18, 2012 'We cannot wait till the world is sane'
Recent Comments
376 Comments | Leave a Comment
Browse Our Archives
Related posts from slacktivist