‘May it never be said … that we merely stood by’

That’s from the tribute posted this week by Union Theological Seminary, where Dr. Harrison taught from 1967 until 1999. There’s a brief tribute at Feminism and Religion, “Mourning the Loss of Beverly Wildung Harrison.” And Caryn Riswold has a remembrance, and some excerpts from Harrison’s writing, appropriately titled “God Bless the Revolution.”

Here’s a bit more, from Harrison’s influential essay, “The Power of Anger in the Work of Love,” from her 1985 book Making the Connections.

There is much more to be said about the environment of the work of radical love within a feminist moral theology that takes its signals from what is deepest and best in women’s historical struggle. Certainly, more also needs to be said about the depth of sin and evil in the world. It is important to remember that a feminist moral theology is utopian, as all good theology is, in that it envisages a society, a world, a cosmos, in which, as Jules Girardi puts it, there are no “excluded ones.” But feminist theology is also mightily realistic, in that it takes with complete seriousness the radical freedom we human beings have for doing good or evil. Since we acknowledge that we have, literally, the power to person-each-other into love — that is, into relationship — we can also acknowledge our power to obliterate dignity, respect, care, and concern for humanity from our world. All of that is within our power. 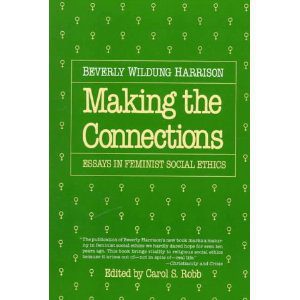 Far more than we care to remember, though, the evil that we do lives on, after us. The radicality of our vision of love gains its urgency from that very knowledge. The prophets of Israel were right to insist, long ago, that the sins of the fathers (and the mothers) live on in us, corroding and destroying the power of relation. This is why our human moral task sometimes seems overwhelming. We live in a time when massive and accumulated injustice, acted out over time, encounters answer in the rising anger of those whose dignity and life are being threatened by collective patterns of privilege that have to be undone. In a world such as this, actively pursuing the works of love will often mean doing all we can to stop the crucifixions, resisting the evil as best we can, or mitigating the suffering of those who are the victims of our humanly disordered relations. In the midst of such a world, it is still within the power of love, which is the good news of God, to keep us in the knowledge that none of us were born only to die, that we were meant to have the gift of life, to know the power of relation and to pass it on.

A chief evidence of the grace of God — which always comes to us in, with, and through each other — is the power to struggle and to experience indignation. We should not make light of our power to rage against the dying of the light. It is the root of the power of love. So may it never be said of any of us feminist theologians that we merely stood by, ladylike, when that power of love was called for or that we sought refuge in an Otherworld when we were needed here and now, in the line of march.