Come down off the cross, Her.meneutics, we could use the wood

Come down off the cross, Her.meneutics, we could use the wood January 7, 2013 Fred Clark

At Christianity Today’s Her.meneutics blog, Karen Swallow Prior isn’t going to let facts, reason, fairness, accuracy or biology interfere with her deep desire to indulge in the luxuriant pleasures of imagined martyrdom.

Martyr is her word, invoked in her over-the-top first paragraph, which sets the tone for the wild excesses of self-pleasuring that follow:

December 26 was a fitting day for Supreme Court Justice Sonia Sotomayor to refuse judicial relief to the Hobby Lobby craft store chain, whose Christian owners object to certain requirements of the Affordable Care Act. On the calendar of Western Christianity, December 26 is St. Stephen’s Day, the day that honors Christendom’s first martyr.

Yes, you see, a giant retail chain being legally required to provide health insurance even for lady parts is exactly like the death-by-stoning of St. Stephen. 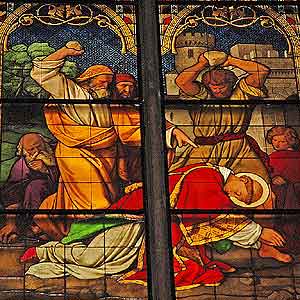 It’s almost as hard to follow as what Prior offers instead of an argument or what she offers instead of facts. Her entire post, like Hobby Lobby’s claim of persecution, is based on non-facts — attributing Satanic baby-killing properties to contraceptives that do not and cannot function as “abortifacients.” (Contraception does not work the way they imagine in part because conception does not work the way they imagine — as simultaneous with the instant of male orgasm.)

But facts and arguments aren’t the reason for posts like hers declaring Hobby Lobby a Christian martyr. That’s not the point. The point is just to feel that … oooooh, yeah … that sweet, sweet … ohhh, yes! … pleasure of imagining oneself to be such a martyr.

We’ll get back to Prior’s twisted argument, her at-best ignorant deployment of non-facts, and her reflexive siding with bosses against workers in a later post. Here let’s just focus on her shamelessly shameful invocation of St. Stephen.

Because Stephen? Really, folks? That takes a staggering level of chutzpah.

We first meet Stephen in Acts 6, when he is among those commissioned by the early proto-church to correct an injustice within the community:

Now during those days, when the disciples were increasing in number, the Hellenists complained against the Hebrews because their widows were being neglected in the daily distribution of food.

And the twelve called together the whole community of the disciples and said, “It is not right that we should neglect the word of God in order to wait at tables.Therefore, friends, select from among yourselves seven men of good standing, full of the Spirit and of wisdom, whom we may appoint to this task, while we, for our part, will devote ourselves to prayer and to serving the word.”

What they said pleased the whole community, and they chose Stephen, a man full of faith and the Holy Spirit, together with Philip, Prochorus, Nicanor, Timon, Parmenas, and Nicolaus, a proselyte of Antioch. They had these men stand before the apostles, who prayed and laid their hands on them.

That is who St. Stephen was. He wasn’t just the “first Christian martyr,” he was also the first Christian hired to carry out an affirmative mandate for the care of women who had previously been denied a fair share and a fair shake.

To invoke Stephen in the defense of some alleged Christian “right” to deny workers the health care they have earned is inexcusable. To presume you’re the heirs of Stephen because you’re fiercely defending the “religious liberty” to neglect the neglected isn’t just immoral, it’s biblically illiterate. It demonstrates a perversely stubborn refusal to understand the story of Stephen that parallels an equally perverse and stubborn refusal to understand how contraception, employee benefits and health insurance work.

January 7, 2013
Tribalism isn't about feelings, it's about the zero-sum outlook
Next Post

January 7, 2013 The future of evangelical leadership doesn't belong to the chosen few
Recent Comments
72 Comments | Leave a Comment
"Some days I swear you are a conservative trying to bait us into saying cruel, ..."
Antigone10 Jan. 21 Flashback: Pushing down on ..."
"Dude knows about the Uighurs, right?"
Old Man Shadow Still a ways away
"Boston Personalism?"
SkyknightXi Still a ways away
"Wait, STILL? I was still living in the old apartment when that was getting necroposted!My ..."
Daniel McLellan Jan. 21 Flashback: Pushing down on ..."
Browse Our Archives
get the latest updates from
slacktivist
and the Patheos
Progressive Christian
Channel
POPULAR AT PATHEOS Progressive Christian
1