“Power is, as you might suspect, on the side of Power. Which is to say, Power never pleads guilty.”

“The statistical association between a representative’s personal wealth and their opposition to the estate tax remained even when factors such as age, party affiliation, their constituents’ opinions and anti-tax views were accounted for.”

“‘I donate to charity mostly for the tax breaks and I’m going to donate less now that the deal looks worse for me‘ is probably near the top of the list of things rich people would do better just keeping to themselves.”

“That the Wall Street Journal would even dare publish such a thing without irony is indicative of the reality that the wealthy don’t live in the same country as the rest of us.” 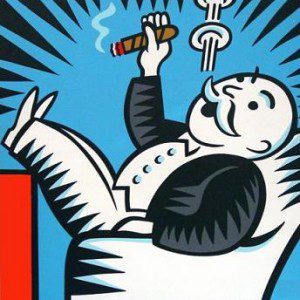 “You can’t hate these people, and it’s clear that director Lauren Greenfield doesn’t. What you can do is deplore them.”

“Spending money to keep kids healthy is about the best spending we can do. It’s an investment with a big payoff, both in terms of spending less later on sick kids, and the greater lifetime earnings potential of kids who grew up healthy and in some cases who got to grow up at all.”

“The more these big brands like Wendy’s and Taco Bell strike out against their blue collar employees supposedly because of an Obamacare provision that reportedly doesn’t even apply to them yet, the more it sounds like these are Republican companies simply trying to save money by making a political statement about a Democratic program and Democratic President they don’t like.”

“Please note this for future reference, and stop being assholes to your employees.”

“We have a Republican Party today willing to eliminate any prospect for a decent future for anyone, including itself, if it cannot be a future that is 100 percent in accordance with its core beliefs and principles. That’s not governing. That’s just lobbing hand grenades.”

“Now that we’ve avoided the deficit reduction plan, we can go back to talking about how the problems are that your grandma is too rich and also, too, Teh Deficit.”

“The Postal Service is in such dire financial straits because, unlike any other agency or private business, it is required by Congress to pre-fund 75 years worth of pension benefits. So USPS is paying for the pensions of employees it has not even hired yet.”

“There’s a lesson in here somewhere about the Market and Meritocracy and how much money ends up being available for rewarding management when you don’t actually have to pay your labor force.”

“Sir: If you occasionally buy this product, please kindly resend this letter to the World Human Right Organization.”

“Apart from advanced farming techniques and better land management, we’ll also need to figure out how to tamp down on food waste.”

“It does not follow that because human nature is sinful we must talk of nothing else and give up all attempts to realize social justice.”

“All over my city, poor people are being taken advantage of because of their accents or their education levels or their inability to navigate a difficult systems. They are paying exorbitant fees, being told they have no rights, being nickeled and dimed out of every cent the management can squeeze out of them.”

“In nearly every instance, Jesus speaks about both financial forgiveness and personal forgiveness simultaneously — as if he cannot separate the two.”

January 29, 2013
Chick-fil-A Biblical Family of the Day
Next Post