Virginia Republicans back away from ‘three-fifths’ plan for black voters

First the good news: A Senate committee in the Virginia legislature shot down SB 723 — a proposal that would have moved away from one-person, one-vote to a gerrymandered system designed to give suburban and rural voters greater weight in decided state-wide elections.

The bad news, of course, is that Virginia Republicans seriously introduced and considered a proposal to move away from one-person, one-vote in favor of a system that would have discounted votes cast by “urban” voters (wink, wink).

That such a thing was even being considered is, as Josh Marshall says, “A big, big deal“:

Another way of looking at this is that the new system makes the votes of whites count for much more than non-whites — which is a helpful thing if you’re overwhelmingly dependent on white votes in a country that is increasingly non-white.

This all sounds pretty crazy. But it gets even crazier when you see the actual numbers. Here’s a very illustrative example. They’re already pushing a bill to do this in the Virginia legislature. Remember, Barack Obama won Virginia and got 13 electoral votes. But as Benjy Sarlin reported today in a series of posts, if the plan now being worked on would have been in place last November, Mitt Romney would have lost the state but still got 9 electoral votes to Obama’s 4. Think of that, two-thirds of the electoral votes for losing the state. If the Virginia plan had been in place across the country, as Republicans are now planning to do, Mitt Romney would have been elected president even though he lost by more than 5 million votes.

Remember, plans to do this are already underway in Michigan, Pennsylvania, Ohio and other states in the Midwest.

Ohio and Michigan Republicans have decided maybe it’s better not to be seen as the party actively seeking to disenfranchise black voters. The plan to do this here in Pennsylvania seems like it’s probably not going anywhere either.

For a sense of just how appalling and explicit this effort was in Virginia, you have to do the arithmetic, as Paul Bibeau did:

This plan counts the votes of Obama supporters, or Democrats, or “urban people” — Have I used the right code words here? Do we know who we’re talking about? — less than other Virginians. 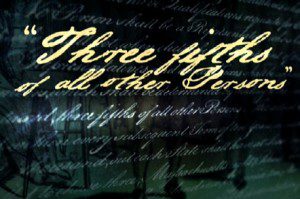 But you need to do the actual math. … Last election, Barack Obama won 51.16% of the vote. Under the new bill he would have won four of the states 13 electoral votes.

It is almost exactly three-fifths.

This bill counts an Obama voter as 3/5 of a person. I don’t know if that fraction rings a bell with you. It was kind of a big deal, way back when. Women in fancy dresses, guys in gray — a lot of gray was in style. Is the light coming on now?

Charlie Pierce did the math too:

There is no point in mincing words. What the Virginia legislature is entertaining now in regards to its election laws is flatly fcking racist.  That it is in response to changing demographics that make Virginia a tough get for the Republicans in presidential elections now doesn’t matter. That it is what we have come to expect from Republican-majority state legislatures around the country now doesn’t matter. That it’s naked opportunism doesn’t matter.  That it may not pass doesn’t matter. This is a legislature acting to devalue African American voters to the advantage of white voters. This is Jim Crow bullshit, and no politician who deals in it, and no political party that continues to support said politician, is worthy of support by decent people in the year 20-goddamn-13.

In addition to disenfranchising voters in dense areas, this would end the principle of “one person, one vote.” If Ohio operated under this scheme, for example, Obama would have received just 22 percent of the electoral votes, despite winning 52 percent of the popular vote in the state.

… This constitutes a massive disenfranchisement of African American and other nonwhite voters, who tend to cluster near urban areas. When you couple this with the move on Monday to redraw the state’s electoral maps — eliminating one state senate district and packing black voters into another, diluting their strength — it’s as if Virginia Republicans are responding to Obama’s repeat victory in the state by building an electoral facsimile of Jim Crow.

And Ta-Nehisi Coates says this is all too familiar for anyone who knows American history:

Efforts to disenfranchise black people, have always been most successful when they worked indirectly. After the initial post-war Black Codes were repealed, white supremacists turned to less obvious modes of discrimination — poll taxes, grandfather clauses, and literacy tests.

These were cloaked under a colorblind argument — “We don’t discriminate against black people, we discriminate against people who can’t read the Constitution.” By “read the Constitution,” they meant “recite the Bill of Rights by heart.” And they’d ask you to do this after reducing your school funding to a pittance. I say this to point [out] that this is not a “new” racism. This is how [the] scheme went before the civil-rights movement, and this is how the scheme works today.

To see the only other major political party in the country effectively giving up on convincing voters, and instead embarking on a strategy of disenfranchisement is bad sign for American democracy. There is nothing gleeful in this.

February 5, 2013
Secrets and lies and the deeper scandal of the evangelical mind
Next Post