No one expects the Evangelical Inquisition! (part 1)

No one expects the Evangelical Inquisition! (part 1) February 9, 2013 Fred Clark

In the early years of the 21st century, to combat the rising tide of religious unorthodoxy, the subculture gave white evangelical gatekeepers leave to move without let or hindrance throughout the land, in a reign of violence, terror and torture that makes a smashing film. This was the Evangelical Inquisition …

Here are some brief highlights of a few examples of the Inquisition at work at evangelical colleges and seminaries, where gatekeepers have pursued their ends with fear, surprise, ruthless efficiency and an almost fanatical devotion to inerrancy.

Shorter is a small liberal arts college in Rome, Georgia, affiliated with the state Baptist convention.

Last year, Shorter purged 36 of about 100 full-time faculty members when it adopted a new “statement of faith” as well as a “personal lifestyle statement.” The latter said:

I reject as acceptable all sexual activity not in agreement with the Bible, including, but not limited to, premarital sex, adultery, and homosexuality.

“Our University was at a crossroads to either take steps to regain an authentic Christian identity in policy and practice or we would become a Christian University in name only,” he said.

For more, see SaveOurShorter — a website for students, faculty and alumni worried about the future of the university.

Emmanuel is (was?) a small seminary near Johnson City, Tenn., affiliated with the Christian Churches and Churches of Christ. 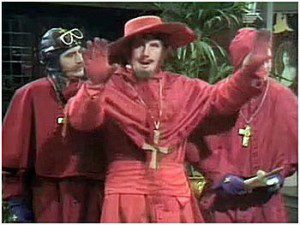 Last summer Dr. Christopher Rollston, professor of Old Testament and Semitic Studies at Emmanuel, wrote a column for the Huffington Post titled, “The Marginalization of Women: A Biblical Value We Don’t Like to Talk About.” While anyone who has actually read the Bible won’t find anything alarming or controversial in that column, it apparently offended some conservative donors at Emmanuel — people, ironically, who fervently believe that the Bible marginalizes women, but see this as a feature, not a bug.

The seminary’s ensuing actions were a clear example of how “inerrancy” and other slogans about the “authority of scripture” are almost always a pretext for culture-war issues. It seemed to involve an attempt by the school’s executives to fire a tenured professor without cause because some conservative culture-warrior donors promised big bucks if they got rid of him. It did not seem that the seminary’s president, Michael Sweeney, was attempting to get away with something unethical as much as that Sweeney had no idea what was or wasn’t ethical behavior.

Robert Cargill has the best summary of the whole sordid affair, which has to be scored as a big defeat for the Inquisition. Rollston landed on his feet with a new gig at George Washington University. And Emmanuel Seminary is attempting a crash landing in which it will be dissolved and/or absorbed into Milligan College.

Most inquisitorial purges wind up destroying schools, but unlike most of those ruined schools, Emmanuel may actually cease to exist.

Al Mohler’s early 1990s purge of non-fundies, non-Calvinists and women at the flagship Southern Baptist seminary in Louisville is the stuff of legend. People telling those stories always sound like Robert Shaw describing the sinking of the Indianapolis in Jaws. “A hundred professors went into the water …”

Mohler created the template: Attack, attack, attack. Always claim to be more orthodox than anyone else, forcing them to play defense. Don’t demonstrate orthodoxy, just assert it as a given until everyone accepts that you must be the foremost authority on what is or is not biblical.

Michael Westmoreland-White’s reminiscences capture some of the atmosphere of Mohler’s purge, although on the whole his description is more cheerful and less frightening than what one usually hears:

I do not want to relive these memories – but they flood through anyway. The students who were paid by fundamentalist trustees to secretly record faculty lectures and see if quotations could be snipped apart from context and run in denominational presses as “proof” of the “rank liberalism” of the seminary! Of the illegal copying of Molly Marshall’s doctoral dissertation for ignoramuses to use as “proof” of her supposed “universalism” in soteriology. The manipulations to try to get her denied tenure — and, when that failed, Mohler’s eventual forcing of her resignation because “we have the votes” on the trustee board – regardless of her defense and before any such defense were possible. The similar fate of Paul Simmons — whom the fundamentalists had hounded for years because he holds a mildly pro-choice view in the ethics of abortion — a matter on which the seminary’s Abstract of Principles (which all faculty sign) is completely silent.

February 10, 2013 Sunday favorites
Recent Comments
78 Comments | Leave a Comment
Browse Our Archives
get the latest from
slacktivist
Sign up for our newsletter
POPULAR AT PATHEOS Progressive Christian
1