A gun in the first act always goes off in the third March 12, 2013 Fred Clark

“It’s everywhere and always been recognized: an armed society is a primitive society.”

“An Oklahoma woman arrested Monday on drug charges had a loaded handgun hidden in her vagina, according to police.”

“Not only did police canine Ivan discover a stolen handgun, he fired it too.” 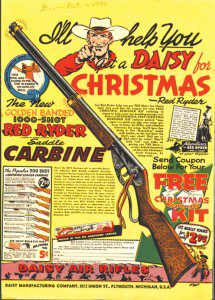 “Police arrested a 61-year-old Florida woman for allegedly pointing a gun at Walmart employees, threatening them after the store refused to honor her coupon for $1 off of a purchase and later attacking authorities.”

“The Tyler Morning Telegraph has learned that a Van Independent School District employee accidentally was shot during a district-sponsored concealed handgun license class on Wednesday.”

“The school district was sponsoring the class as part of its program to arm teachers and other school employees, in response to the Sandy Hook Elementary massacre and the NRA’s call for America to arm its schools.”

“A school district in New York has put a program to put armed officers in schools on hold after a policeman’s handgun went off at Highland High School.”

“The National Rifle Association’s field representative for New York was barred from having guns after an altercation with his wife.”

“A 3-year-old boy from Manchester, Tennessee was left in critical condition over the weekend after being shot while handling a small gun that an adult left sitting on a nearby counter-top.”

“Family and friends in Michigan are mourning the death of a 4-year-old Jackson County deputy’•s son, who accidentally shot and killed himself over the weekend.”

“I’m very much on the conservative side of politics, but I just saw this as one of those things that demanded the use of the authority of my office to try and change.”

“I know my father is watching us on this journey … to make our community, our state, and our country a safer place.”

“You folks in Chicago want me to get castrated because your families are having too many kids. It spells out exactly what is happening here. You want us to get rid of guns.”

March 12, 2013 'On the side of the underdog, always and everywhere'
Recent Comments
284 Comments | Leave a Comment
"In Canada even the grizzlies are polite:https://twitter.com/FeelGoo...(from link on Jeremy Fox's ecology blog).For those who ..."
MaryKaye Sapphira is a model of ‘complementarian ..."
"Hence my trying VERY HARD to quash it in myself. My mom's very patient; and ..."
KhazadDoom The true fix is not education
"One could also speculate that Acts was cobbled together over time from different sources and ..."
Carstonio Sapphira is a model of ‘complementarian ..."
"Well, the lack of support is from early in the Gospels where they say, right ..."
Jim Roberts Sapphira is a model of ‘complementarian ..."
Browse Our Archives
get the latest from
slacktivist
Sign up for our newsletter
POPULAR AT PATHEOS Progressive Christian
1