The Minnesota Republican said this, perversely, in support of the 39th attempt to repeal the Affordable Care Act. Igor Volsky of Think Progress provides a fuller context for Bachmann’s odd remarks:

Moments after calling for the complete repeal of a law that will extend health care coverage to 30 million Americans, Bachmann claimed that her belief in Christ inspires her to care “for the least of those who are in our midst.”

Bachmann, in other words, is arguing that we should “love” seniors by transferring $6 billion from their pockets into the coffers of pharmaceutical companies and by denying 34.1 million of them access to preventive health care. She wants us to “love” working people by charging them higher premiums for health insurance. And she wants us to “love” millions of young adults by kicking them off of their parents insurance plans. 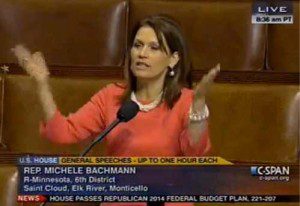 Can’t you just feel the love?

But perhaps the weirdest moment in Bachmann’s speech — amidst the blasphemous misquotations of scripture and the whole-cloth fabrications of bogus statistics and “death panel” lies — was the moment when she asked, “Where are poor women supposed to go?” for health care.

I’m glad she’s at least asking that question, even if she’s not interested in finding out the answer. For tens of millions of poor women, that question will have a new answer once the Affordable Care Act is fully implemented, but for millions more the answer will remain the same as it has been for years now in America. Poor women will go to the one place poor women have always gone for affordable, reliable access to the health care that is otherwise denied them because they are poor and because they are women: They will go to Planned Parenthood.

And most of that has nothing to do with abortion. Abortion services account for only 3 percent of what Planned Parenthood does. But then it’s not really accurate to say that the other 97 percent of the care they provide has nothing to do with abortion — that care, from family planning to prenatal care to preventive and nutritional care for pregnant women and their children, means that Planned Parenthood does more to prevent abortion than any “pro-life” organization, maybe even more than all of them put together.

So how is it that someone like Michele Bachmann doesn’t know this?

Neither does the Rev. Rick Warren, who recently tweeted this bit of pastoral malpractice:

Planned Parenthood is the McDonalds of abortion. It’s the #1 baby killing franchise.

No need to play “stupid or evil?” with that one. It’s both. The stupid and the evil are mutually reinforcing.

Warren is supposed to be the pastor to a congregation of 25,000 people. About half of his “flock” are women. Granted, Warren’s Saddleback church isn’t a working-class congregation, and many of its members are wealthy enough that they never have to worry about relying on any place with the word “clinic” in the title (unless it’s the Mayo Clinic). But it’s still a statistical certainty that the congregation of Saddleback Church includes hundreds of women who rely on Planned Parenthood for health care they cannot afford to get elsewhere. And that congregation likely includes thousands of women who have relied on it in the past.

But if punching down at the less-wealthy women in his congregation is the price of indulging in smug self-congratulation, that’s a price Rick Warren is happy to pay.

If telling himself that he’s a good person requires him to treat others badly, then he’ll enthusiastically play the role of anti-pastor to hundreds of members of his flock.

After all, what’s more important? To do good and be good? Or to reassure himself that he’s better than the Satanic baby-killers?

Warren, like Bachmann, chooses the latter every time. That’s evil. And it makes Warren stupid in that it causes him to be more ignorant than he otherwise would be or could be or should be. It guarantees that hundreds of women in his congregation who know things he does not know — things he ought to know and needs to know — will never share that knowledge with him. He’s made it clear he doesn’t want to hear it.

He’s made it clear that it would not be safe for them to tell him the truth they know. And thus it guarantees that he will never learn from them.

I’m sure that Warren’s first reaction to all of this would be to deny that any woman who attends Saddleback would ever go to Planned Parenthood and to assert that the women of his congregation surely all agree with his flippant dismissal and condemnation of that vital lifeline for poor women. After all, he likely thinks, no one has ever told him otherwise. And I doubt he can be made to understand why that is. I doubt he will ever realize how he has made it impossible for anyone to ever be honest with him, or to ever tell him anything he clearly doesn’t want to know.

That is not a good place to be. You have to take quite a few wrong turns to end up in the situation Rick Warren has created for himself — a situation in which being cruel to others boosts his self-esteem, a situation in which ignorantly condemning hundreds of people in his own congregation makes him feel like he’s being a better pastor.

“Pastor” Warren offers them only condemnation — and not even because of anything they have actually done wrong, but only because condemning them is his preferred shorthand for praising himself and his own presumed righteousness.

Not good. Not smart. Not something any decent pastor should ever do.

The better way, the most excellent way, would be instead to love and care for people. And I’d say exactly that — I’d say, “Let’s love people, let’s care about people.” But thanks to folks like Michele Bachmann and Rick Warren, those words have become much harder to understand.

March 25, 2013 Matthew 16:6
Recent Comments
313 Comments | Leave a Comment
"I looked in on "Please don't eat the chimpanzee."The illustrations for the vision... I think ..."
Shadsie May 21 Flashback: Southern Baptist shrimp
"I thought Sonic was supposed to be a hedgehog. *Checks* Hedgehogs have pointy incisors. But ..."
Marja Erwin Oops
"I need a pick-me-up, so here's some Art Nouveau beauty: three pitchers, three different themes.First ..."
Jenny Islander Oops
"I won't bother the list with the details of what went down over the past ..."
Jenny Islander Oops
Browse Our Archives
Related posts from slacktivist